Andrew Deaney is a 27 year old Presbyterian living in Ballyclare.

I recently broke the cardinal rule of polite conversation and had a chat with a colleague about religion and politics. We’re both from different community backgrounds and she was interested in what “sect” of Protestantism I belonged to. “Oh, I’m a Presbyterian”, I answered, in my staunch and dour Presbyterian manner. “Really?” she replied, bemused. “Well you must be a pretty bad Presbyterian if you support same-sex marriage.”

This is quite a hot topic at the minute since the General Assembly’s recent controversial ruling on same-sex couples and the attendant loosing of relations with the Church of Scotland. This ruling has generated heated debate, a lot of it on the theological level, but I want to park the issue of Biblical interpretation. This is partly because I’m no theologian, and partly because I think that in-house doctrinal disputes are a bit of a distraction. My argument, I think, holds water whether you see same-sex marriage as stamped with scriptural approval, or as a sinful, secular innovation.

This may sound surprising to a Presbyterian reader, but this is because a fundamental distinction has been lost amongst the rhetorical back and forth. The distinction is as follows: support for same-sex marriage does not necessarily equal an endorsement of same-sex marriage. Of course, the two can, and frequently do, co-exist- but they don’t have to.

One golden thread of the Irish Presbyterian tradition has been a devotion to freedom of conscience and, as an extension of this, freedom of religion. It would be a self-serving error to pretend that this thread constitutes the entirety of the tradition- it sits uneasily with an equally pervasive thread of bigotry and authoritarianism- but it’s undeniably mainstream with an impressive pedigree. Freedom of conscience and religion is not an anomalous add-on. It has both shaped, and been shaped by, the historical experiences of Presbyterians on this island.

A Presbyterian can quite consistently support freedom of religion for all, without endorsing any other religion. He or she can support the right of a person to believe that Mohammed is the prophet of Allah, or that the Pope is Christ’s representative on Earth, or even that there is no God, without actually endorsing any of the foregoing opinions. In fact, I’d be willing to bet that the vast majority of Presbyterians do support such freedom of belief. 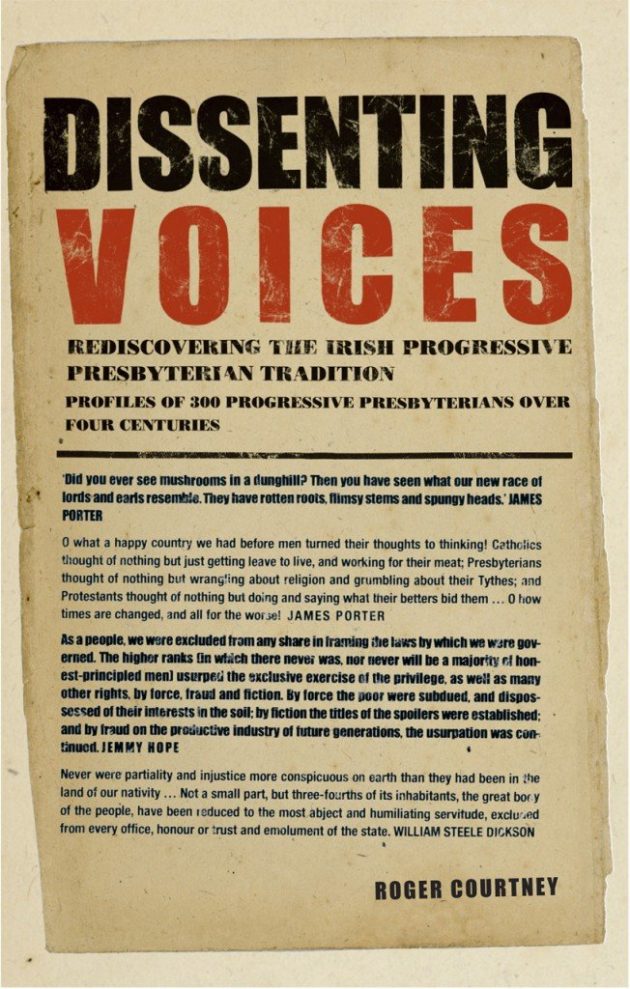 When it first arrived on the Emerald Isle, Presbyterianism was a religion of dissent. It departed in important ways from the state-mandated religion of Anglicanism. This dissent invited intolerance from the authorities. There is a wonderful book by Roger Courtney called Dissenting Voices which details biographies of “progressive Presbyterians” through the ages. Many of these men – and most are men – were afflicted by the infamous penal laws, which denied them their right to fully engage in society because of their Presbyterian beliefs.

As a result of this persecution (if that is not too strong a word) the fight for freedom of conscience and religion for everyone became embedded into an important and influential section of Irish Presbyterian political culture. Presbyterians knew from first-hand experience why the legal privileging of one particular strand of religion was bad. They suffered under it.

When you read accounts of the religious discrimination faced by Presbyterians, one issue, in particular, stands out glaringly.

Presbyterians in the early 18th century were embattled in a campaign for equal marriage. Presbyterian marriages were not recognised by the state as they were not conducted in accordance with the rite of the reigning Church of Ireland.

This had enormous effects on the daily lives of Presbyterians. Ministers were prosecuted by the bishops court’s for conducting unlawful ceremonies. Children of Presbyterian spouses were disinherited, written off as “bastards”, and the spouses themselves were considered sin-ridden fornicators.

The problem was analogous to the problem of established religion. One particular theological interpretation of what marriage was – namely, a sacrament of the Church of Ireland, to be conducted according to its rules and procedures – was given legal priority over all others.

This is, I contend, exactly what is happening today with our current denial of same-sex marriage. Opponents claim that they do not wish marriage to be redefined. Unfortunately for them, marriage has already been “re-defined”. It is a civil, legal relationship which now includes, in many parts of the world, same-sex couples. Resisting law reform here on the grounds that it is not biblical is akin to establishing a particular theological interpretation of marriage in law, to the detriment of other interpretations. This completely flies in the face of the golden thread of Presbyterian resistance to state-sanctioned theology.

And make no mistake, this is much more a matter of religious freedom that it may first appear. There are various denominations in the rest of the United Kingdom which consider same-sex marriage a sacrament consecrated by God. This is their sincerely held religious belief. However, because a certain theological definition of marriage has a monopoly in Northern Ireland, the state refuses to recognise this belief. If a married couple of such a religious persuasion relocates to Northern Ireland, their marriage ceases to exist: their religiously-held beliefs regarding the status of their relationship are in effect denied by the state. This should especially disturb Presbyterians who are also unionists – as many are, myself included – as this means that parity of religious esteem is not equally upheld throughout the Union.

There are, no doubt, also churches in Northern Ireland which would, if permitted, consecrate same-sex marriages. These churches too are being denied the very same right that Presbyterians were denied in the early 18th century (albeit with less drastic consequences, thankfully).

This cannot be allowed to continue. Whether or not you endorse same-sex marriage as sanctioned by God is beside the point. It was only a matter of a few centuries ago that we Presbyterians were on the sharp end of such theocratic logic. Irish Presbyterians know only too well how sour things can turn when the government starts doing theology.

It is time that we as Presbyterians do unto others as we wished the Church of Ireland had done unto as all those years ago.