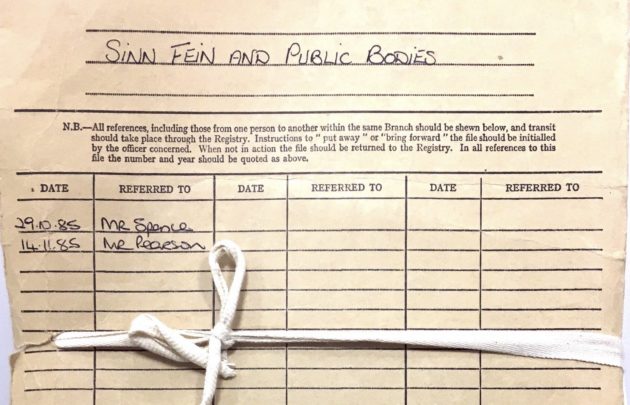 During the mid-1980s, it was civil service policy that requests for meetings between Northern Ireland Office Ministers and Sinn Féin MPs, Assembly Members or Councillors should be “refused and the enquirer asked to put his views in writing … even if part of a larger delegation with other parties”.

The arms-length treatment of Sinn Féin extended to its leader: “Mr Adams should not receive departmental publications etc which are given to other [sic] MPs as a matter courtesy”, though specific requests for documents visible to other elected representatives would be satisfied. 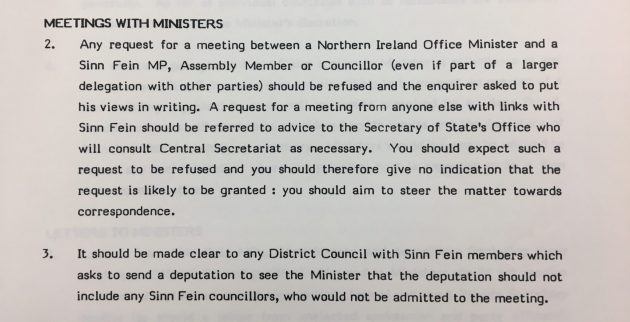 Official documents released under the 20 Year Rule in the battered CENT/1/14/32A [PDF] file (bound with a string which you can pull open if you visit the Public Records Office in Titanic Quarter and check out the file) show how officials debated what latitude the Secretary of State had in not nominating Sinn Féin nominations to positions on education and health boards.

The Department had no discretion over appointing council representatives to Education Boards, but had more leeway with Health Boards to which they had to appoint “at least one personal nominated by each of the District Councils”. Omagh District Council got round this loophole by only nominating one councillor – Seamus Kerr from Sinn Féin – with no alternative nominees.

A long position paper written by Ken Bloomfield and an ad hoc group of colleagues had pondered in July 1985 “whether it would be possible to devise a form of words to which Sinn Féin representatives would in practice be unwilling to subscribe”.

“members of Sinn Féin have notably delicate consciences, and they have increasingly been disposed to place pragmatic opportunism before ideology.”

The group discounted a form of declaration that would see elected representatives reject “the use of violence for political ends”, sensing that “logic-chopping” Sinn Féin members would distinguish between “’violence’ (which they would construe as the unjust use of force by the ‘occupying forces’) and ‘the just and understandable use of force to secure justice and freedom from oppression’, which could not properly be described as violence.”

So “if our real target is Sinn Féin” they proposed a draft form of declaration:

“I declare that I will uphold the laws of Northern Ireland, and that I do not and will not support the methods or assist the activities of any organisation proscribed by law.”

Eight years later, Sir Ken Bloomfield would retire and write a valedictory memo to senior civil servants (and interested parties decades later when his papers would be released) in which he described “the distinction between a ‘legal’ Provisional Sinn Fein and a proscribed PIRA” as “farcical in principle and effect” and a “critical error” to which he may have contributed.

The last paper to be added to the Sinn Féin and Public Bodies file is a letter to Permanent Secretaries from Ken Bloomfield titled Contacts with “Organisations ‘Boycotting’ Government”. It’s an example of officialdom tying itself in knots with the policy of keeping Sinn Féin at arm’s length presentationally.

However, reading it in 2018, the idea of the UK Government breaking off contact with public representatives who boycott government in Northern Ireland would result in two parties rather than one being ostracised … although one is happy to be in government in London, and the other in Dublin!

Another file released today – CENT/1/21/10A – contains a number of papers which discuss ‘Themes to hurt Sinn Fein’, ‘Themes to hurt the Loyalist Paramilitary Organisations’, and paper on how government Ministers should approach the media around terrorist incidents.