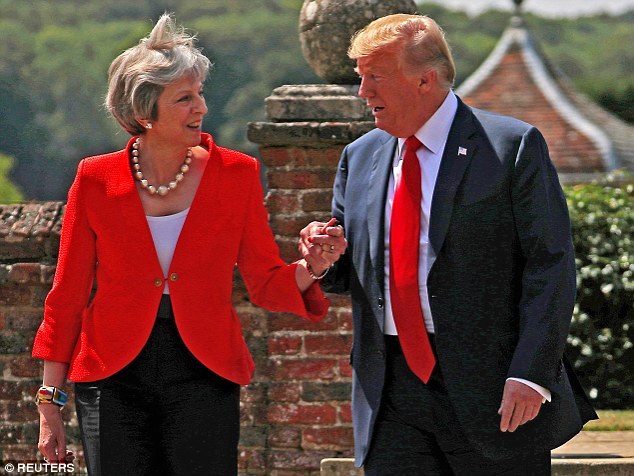 For MPs at Westminster, the long hot summer ends on Tuesday week.  In the short time remaining, the government will scrape a majority for the Trade Bill.  Over the next couple of days David Davis and perhaps Boris Johnson will make resignation statements in the Chamber that will fuel speculation about a coup. But time is tight to mount a leadership challenge against Theresa May before the adjournment. The political journalists’ lobby know this but want to keep the pot boiling for one last surge before the break. It’s amazing too  that for  all his gabbiness, Trump’s interventions are quickly  subsiding into incidental noises off.

Davis doesn’t talk like a head-on challenger to May; he wants the policy changed and seems to think there’s a chance of it. Had the cabinet struck together last week, May’s plan with all its vagueness on customs and gaps on regulation might have passed without early challenge,  to be fleshed out and amended in internal debate and the negotiation process.  My bet is this will happen yet. For the Conservatives however divided,  the risk of a Corbyn government is too great.

In the Sunday Times Davis makes it clear that for all the legalistic language from Barnier and co, he thought he was involved in a purely political game until October at least. That is why he barely bothered to  turn up in Brussels  this year and now despairs of the fact that May has “blinked first.”   He still believes that his formula will work.

How does the original plan differ from what the government is now putting forward? Much of the white paper is the same, of course, since the government could not have created 100-plus pages in a few days unless it had cut and pasted the existing work. The key difference is over the question of regulation. The original, and still best, proposal is to allow the absolute right to diverge over regulations. Then if parliament chooses to alter these regulations, the difference is assessed to see whether it leads to an important change in outcome or effect. So the test would be: does the new regulation provide equal or better levels of safety, or emissions control, or animal welfare, or whatever it was that the regulation was aimed at? Not whether it was identical law. This is intrinsically a practical or scientific test that could be carried out by a joint committee or independent arbitration panel with no reference to the European Court

In the event that we are found to be getting an unfair advantage, we could either change our decision or face a limited but appropriate restriction on market access. And vice versa for the EU.

All this would operate within a “mutual recognition of standards and inspection” regime to minimise the burden of bureaucracy. The commission does not like this much, but it has negotiated mutual recognition regimes with other countries in the past. And on the basis of my experience, most European countries are comfortable with this.

Theresa May obviously thinks otherwise and  believes that Davis’ plan would be dead in the water if presented to the EU. Better to go forward with emollient vagueness and see how far we get.

At least one prominent Brexiteer, the MEP and columnist Daniel Hannan agrees.

So should Conservative MPs vote for this lopsided and embarrassing deal? Yes. Unless it is watered down further, they should grit their teeth and accept it as their last chance to secure a smooth Brexit. What, after all, are the alternatives? One possibility is that Britain pulls out acrimoniously, generating economic disruption for both sides and propelling Jeremy Corbyn toward government. Another, surely likelier, is that our Europhile Parliament refuses to countenance no deal, and accepts the Carthaginian terms that Euro-zealots want: EU jurisdiction, financial transfers and customs union membership.

Since we keep being told that the Irish border is the nub of the dispute, it is worth recalling the circumstances in which that border was created.

A century ago, many Irish nationalists rejected the terms on which the Irish Free State was to leave the UK, involving as they did an oath of loyalty to the Crown, British control of three Irish ports and residual fiscal transfers. But others saw incomplete autonomy as “freedom to achieve freedom”, and they were right. After the separation, Britain progressively lost interest, and Ireland became, by stages, a fully sovereign republic (until 1973, when it joined the EEC).

This appears to mean that Ireland will string along foreseeably with the British offer. Davis is adamant that the emphasis on the border is a essentially a political tactic. We shall see.

Sometimes it seems Whitehall is stuck in the card index era when it comes to exercising our imagination on customs.

This is certainly true when it comes to Northern Ireland — held up as the great block on progress. So let us be clear. Under no circumstances will the UK install a hard border in Northern Ireland. That is a given. I find it hard to believe that the Republic of Ireland will either. People might be forgiven for wondering what the exact problem is.

What people also forget is that there is already a border there. VAT, excise duties and other taxes differ north and south of the border. The customs authorities manage this now by careful intelligence-led policing of goods movements, which is exactly how it will work in the future. Before the issue became heavily politicised, both the head of the UK customs and Irish customs said they could operate without any customs posts. And so they will.

EU concerns about Northern Ireland becoming a back door into the EU for third-country goods are easily manageable. Much is made of the nearly 300 crossing points on the border, but little of the fact that there are barely half a dozen ports. This means surveillance on goods from the rest of the world into Northern Ireland is comparatively easy.

Simply put, the answers to the customs and the NI issue are detailed and technical but rely on existing technology and sensible management, not on sweeping political solutions that imperil long-standing and sometimes delicate political arrangements.

This is hard work but the reward it will deliver is enormous. In all the agonising about exactly which technical answer we choose, we should never forget that the purpose of much of this is to liberate our businesses to make the most of the fast-growing global markets that will open up to us after we leave the EU. The commission itself recognises that 90% of the growth in world trade will come from outside the EU. Even if we had stayed in, 65% of our trade would have been with the rest of the world by the middle of the next decade. Now it will be even more.

At one level that is what some Europeans fear: that we will be able to exploit all our natural advantages. Our English language, our Commonwealth, our natural alliances, the benefits of our legal system, our scientific talents, our status as a global financial centre, our standing in the world as a UN security council member, our military, intelligence and development reach. That we will use all this to make a spectacular success of Brexit.

They are right and all we need is the freedom to do it.