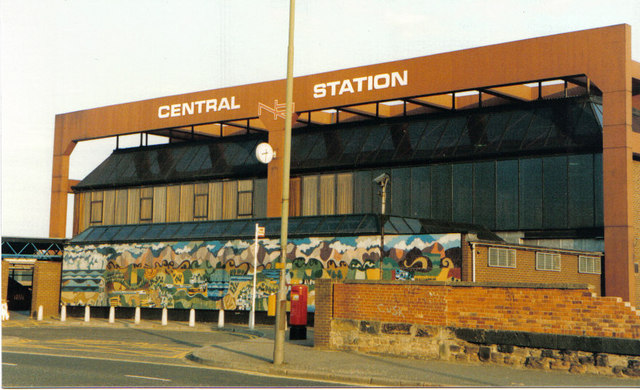 An interesting tidbit in the news today with Translink announcing that Belfast Central Station is to be renamed “Lanyon Place” following a programme of refurbishment due to be completed in September. From the press release :

The Lanyon Place area has become a major hub of activity, with the ‘Lanyon’ name being adopted by a range of neighbouring businesses, alongside Belfast City Council’s exciting plans for the Lanyon Tunnels.

‘We consulted with a range of local stakeholders regarding this name change, and Lanyon Place made sense in order to provide more clarity on where the station is geographically located within the city.  We plan to phase the new name in over the coming months, with the official name change introduced from September when the works are due to be completed.

The renaming of the station breaks with a little piece of tradition that is not well understood by Belfast residents and visitors alike –  who often ask “why is it called Belfast Central when it isn’t in any way central ?”

The answer lies in the long and fractured history of the railways in Belfast. Back in the Victorian era, when the railways were being constructed under what was then a kind of dot-com boom, private sector investors were building railways all over the place, subject to little control other than soft-touch parliamentary authorisation. In Belfast, there were three separate and unconnected railway terminii, all of them grand, opulent structures reflecting the huge amounts of capital being poured into their construction, and the prestige the new railway companies felt their stations and routes ought to have.

Only a few weeks ago, the last remaining (visible) part of the original York Road railway station – the Midland Building, previously known as the Midland Hotel – was quietly demolished. This was originally the part of terminus of what started life as the Belfast and Ballymena Railway Company in 1848. This enormous station and its associated yards and facilities stretched to the north and west from York Road all the way across to Duncrue Street. Later, the original company was subsumed by the Belfast and Northern Counties Railway, until it was taken over by the GB-based London Midland and Scotland railway, who subsumed it under the name “Northern Counties Committee”. The LMS-NCC controlled one of the two major routes serving Derry out of Belfast as well as innumerable branch lines along the way, and supervised what would turn out to be the last major railway construction project anywhere on the island of Ireland for nearly a century – the Bleach Green-Monkstown bridge and direct curve, in the early 1930s.

On the opposite of the river, Queen’s Quay station was built by what was the Belfast and County Down railway which initially served Holywood and, a little later, Downpatrick. No trace of the original station now exists, the M3 motorway bridge having been built directly on the site, although some bits and pieces of buildings and walls appear to be exist in and around the Old Channel Road.

Finally, there was the Ulster Railway’s magnificent premises, with canopy, at Great Victoria Street, occupying the site where the Millenium House and a shopping mall now stand, and where railway passengers once passed under an opulent canopy and columns rather than scurrying like rats through a dingy corridor. The Ulster Railway originally ran to Lisburn, then Portadown, then to Omagh, before it would be subsumed into the Great Northern Railway of Ireland.

By the time these railways and their terminii were well established, some enterprising souls realised that there could be benefit in connecting them together. To this end, the new Belfast Central Railway Company was established. Initially, the route ran from Great Victoria Street to Queen’s Quay, passing under the Donegall, Lisburn and Ormeau Roads to May’s Meadow where Central Station now stands, and thence over a bridge to Ballymacarrett Junction just west of Queen’s Quay was constructed. This section opened to goods in 1874 and to passengers in 1878. Later, an additional short route was added from May’s Meadow, following the now-lost Laganbank Road, past the site of the Waterfront Hall and the BT Riverside Tower to Oxford Street at Queen’s Bridge, where a short tunnel took the line a short distance further to connect with the Belfast Harbour Commissioners’ private railway at the docks. A station was provided at the site that would later be occupied by Oxford Street bus station.

Checking my handy copy of Stephen Johnson’s excellent Gazetteer, I see the original stations along this route were named Windsor, which was positioned near today’s City Hospital station (albeit closer to the Lisburn Road) and Ormeau. A gate is still present on the Ormeau Road bridge leading down to the track below.

The Belfast Central Railway Company had a long run of bad luck, possibly owing to some poor choices of route. A train travelling from Great Victoria Street to Queen’s Quay had to reverse twice on the way, first at Central Junction (which faced the Dublin direction), and then again at Ballymacarrett. This was not easy to do in the days of steam engines. Traversing the Harbour Commissioner lines to reach York Road station was even more difficult, requiring additional reversals through the harbour lines and the Duncrue Street sidings. On top of this, the tunnel at Queen’s Bridge was prone to flooding. Slugger readers of a slightly older generation may remember the pedestrian subway tunnel there, built in the old railway tunnel, that was frequently closed due to being waterlogged.

The beleaguered Belfast Central Railway was soon bought out by the Great Northern Railway who mostly used it for access to the extensive sidings at May’s Meadow (where there was an abattoir and associated cattle handling facilities) and for running occasional transfers to Queen’s Quay. All passenger services were stopped a few short years after they began, in November 1885. Over time the route fell into disuse and was closed by the Ulster Transport Authority in 1965.

A short time later the Stormont government decided to shake up transportation in Northern Ireland with the Transport Act in 1967. This abolished the old Ulster Transport Authority and transferred its assets into the Northern Ireland Transport Holding Company (NITHCo). A subsidiary, Northern Ireland Railways, was set up to manage the railways and it set to work making improvements, ordering new trains for the Enterprise service in 1970, and pushing forward plans to reconnect the three railway terminii. The compromise for reinstating the Belfast Central Railway appears to have been the demolition of the old Great Victoria Street station, now a shadow of its former self as the Troubles made their mark on the city centre. The Stormont government had ambitious motorway-building plans involving the site, although, perhaps thankfully, these never saw the light of day.

It would be 1976 before the reinstatement of the main part of the central route was complete, alongside the refurbishment and reopening of the old Great Northern link from Knockmore Junction to Antrim. The new Belfast Central station, named after the Belfast Central Railway upon which it was built, opened for service near the old BCR sidings and abattoir at May’s Meadow. Great Victoria Street and Queen’s Quay were demolished not long after, although the Queen’s Quay shed lived on as NIR’s Central Services Depot. For the first time, services to Portadown/Dublin, Antrim/Derry, and Bangor were connected at one central hub. Sadly it would be another 20 years before the York Road-Larne section would be connected via a bridge at the River Lagan.

It is, of course, the right thing for Central Station to be renamed, reflecting the fact that soon, Belfast’s principal transport hub will be restored to its rightful place at Great Victoria Street. But at the same time, it’s important to mark not so much the renaming of a confusingly-named station, but, rather, another visible reminder of Belfast’s Victorian history and the daring industrialists who built it – whose vision of an interconnected railway would be over a century ahead of its time – slipping unnoticed out of public view.