On Wednesday evening, our one-time cartoonist and occasional blogger Brian John Spencer landed himself in controversial waters over a graphic depiction of the Kingsmill massacre. For the most part, we on Slugger kept out of it as Twitter went into meltdown.

Things went ‘ballistic’ when South Belfast DUP MLA Christopher Stalford took the cartoon and tweeted it to his followers. He later took it down after a request from victims relatives. As you can see below the cartoon was, well, pretty graphic: 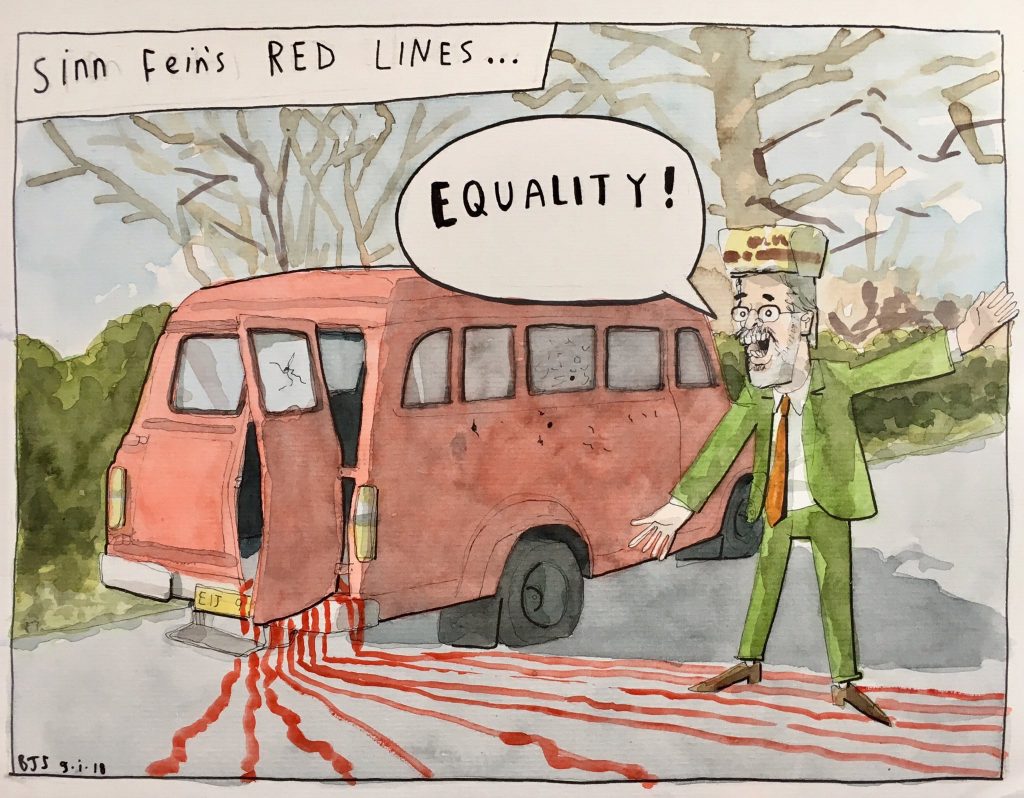 It was BBC NI who gave Brian the chance to explain what he’d done and why:

‘The job of an artist is to look at what’s happening and point out the hypocrisy and the bluffery.

‘The material with the van and the blood could be seen as obscene, but the past was gory and brutal and tough images have to be seen to reject the past and move forward together.’

Mr Spencer said he created the cartoon to illustrate “lecturing fatigue” within the unionist community, brought on by Sinn Féin’s stance on equality issues.

‘It’s interesting for me to watch Sinn Féin going around lecturing, but I worry because they have these young people from the next generation backing the old line.’

The most bizarre aspect of the whole affair has been the degree of the reaction to the piece, not just from Sinn Fein supporters, from whom you’d expect a natural defensiveness when anyone speaks ill of their project never mind their leader, but from important liberal figures like Naomi Long too.

Why bizarre? There is a tradition in most western democracies of cartoons saying in graphic satire (think Charlie Hebdo) what many people are thinking but fear to speak out loud. It’s a safety valve against the growth of cant and institutionalised hypocrisy. And clearly something that’s been missing for quite some time in Northern Ireland.

Of course, the image is brutal. But the crime was brutal too, and conducted without a scintilla of mercy. The red lines of blood are no invention of the cartoonist: that is how it happened. And, as Gladys tenderly laid out below, the manner of their going was a potent gesture against a vicious tide of sectarian demagoguery and butchery of those grim times.

It depicts what those who have too eagerly dismissed the proper context for Barry McElduff’s cold and heartless prank would rather never have been laid open. SF’s present political strategy of lionising a relatively small number of victims whilst ignoring or, as here, actively denigrating the deaths of others only compounds the party’s failure to properly punish McElduff is an encouragement to further gestures of disrespect.

Adams’ presence in the piece, as opposed to Barry himself, is a nod to that famous line from the Sinn Fein President when he rather too candidly admitted that he was using the Equality agenda to ‘break the bastards’. It is slowly dawning on some that this class of double play (like the pretence still played along with by the party publicly that the massacre more than forty years had nothing to do with IRA volunteers it now publicly revers) is deeply corrosive of human rights.

And yet Sinn Fein appear oblivious as to how these present day actions are viewed from the outside. Or, indeed, how much grace was extended to them not, simply by unionists but by nationalists and non nationalists rivals through, amongst other things, the de facto acceptance of the butchers of Kingsmill firstly into the peace process and latterly as representatives in government.

Underpinning this grace has been a general unwillingness to threaten peace by taking too blunt a view of the party that came in from the cold. Spencer’s cartoon poses a reverse view and suggests that perhaps we have too willing to play along with SF’s paramilitary conceits and too willing to sideline the stories and interests of thousands of faceless victims of the Republican and Loyalist violence.

And that, perhaps, SF’s inconsistent demands for unconditional tolerance from past victims whilst demonstrating a complete lack of concern for either their feelings or wellbeing is what’s preventing the very open-heartedness and “generous instinct” that a post Agreement Northern Ireland needs to find a natural democratic and post troubles level of normality.