Alex Gibney has made a very compelling documentary film No Stone Unturned that explores the circumstances around the Loughinisland massacre. Loyalist gunmen burst into a pub not far from the main Newcastle to Belfast road during the Republic of Ireland vs Italy World Cup match on 18 June 1994 and indiscriminately shot six men dead and wounded another five. The UVF claimed responsibility for the attack. No one has ever been charged with the six murders.

Through reconstruction, family testimony, interviews with detectives, the current Police Ombudsman, and the input of journalist Barry McCaffrey who has investigated the case over many years, the jigsaw pieces are examined and laid out on the table.

Yet the surprise is that when the pieces are fitted together, they create a much larger, more complex and more detailed picture than the front of the box expected, going well beyond even the Police Ombudsman’s second report into the original police investigation. 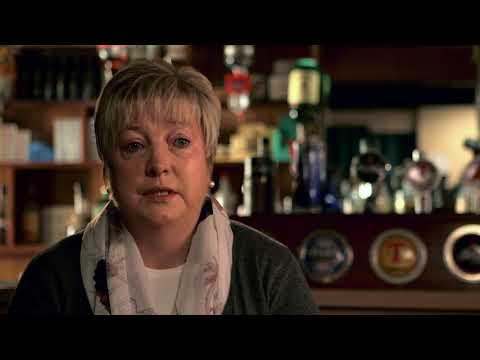 Family members recall the immediate aftermath, one quoting a police officer who attended her husband’s wake and said that “we will leave no stone unturned until we get the perpetrators”. They remember the manner in which the police investigation seemed to run out of steam and their own reluctance to make a fuss in the midst of a burgeoning peace process: the IRA ceasefire was called six weeks after the shooting, shortly followed by the loyalist ceasefire.

While the original (and subsequently quashed) ‘Al Hutchinson’ Police Ombudsman’s report recognised failings in the police investigation, it found no evidence of collusion between the RUC and the UVF. In reaching that conclusion it helpfully ignored investigating the lead up to the attack and the role of informers.

The current Police Ombudsman Dr Michael Maguire cooperated with the documentary, giving an interview and allowing his pre-publication briefing to the families to be filmed. An investigator from the Ombudsman also speaks to camera, along with an RUC detective who helps shine a light on some of the unusual quirks he encountered in the original investigation.

Do not mistake No Stone Unturned for a simple police procedural documentary. Instead it is a para-police or extra-police procedural that gathers together a wide range of sources, linking and corroborating the evidence to present a more fulsome picture than the state authorities and the independent ombudsman has been able to publish.

Made for an international audience, this is a cinematic version of one of those popular podcast series that gets under the skin of a murder. A comprehensive soundtrack by Ivor Guest and Robert Logan accompanies the imagery and sets the tone of each scene. It’s an unrushed production that gently examines each piece of the jigsaw before fitting it to the growing picture.

Lengthy sections of the film give audiences abroad – as well as younger ones locally and anyone in Great Britain or Ireland who ignored the conflict in Northern Ireland – a potted history of The Troubles, a quick lesson in the complexity of police/army informers (using IRA double agent Freddie Scappaticci as an example) and the background to loyalist gunrunning that brought the VZ58 assault rifles that were used in the Loughinisland attack into Northern Ireland. It’s during some of these scenes that the handbrake is pulled on a little and the film begins to slow down and drag. However, it passes. This isn’t a flash bang wallop slight of hand Lieutenant Columbo story. There are a lot of dots. But by jove, Alex Gibney knows how to connect them.

Normally in a film review I’d stop short of giving spoilers … but this one is about a real life situation.

The police’s haphazard (or deliberately negligent?) handling and destruction of evidence is appalling. So too is withholding of intelligence about the suspects, and the two month delay in interviewing one of them (who lived close to where the getaway car broke down and was abandoned without being destroyed).

Then there’s the Senior Investigating Officer who took charge of the Loughinisland crime scene and swiftly went off on a month’s holiday after the attack, and upon retirement did not cooperate with the Police Ombudsman’s investigation. While the team’s confrontation with him is not caught on camera, the explanation of how seriously put out by the amassed evidence deserves the one laugh of the film.

Piecing together a note anonymously sent to a local councillor with the Ombudsman’s report and checking against a leaked copy of an unredacted internal report from some years before allowed Barry McCaffrey (The Detail) and the filmmakers to identify the gunman, his accomplice who held the pub door open, and the getaway driver.

The suspects are named. [Given how this would prejudice any trial – not that you’d be holding your breath waiting for one after realising the level of obfuscation – it does leave me with a lot of unanswered questions about how it has been legally possible to do this and what other factors had already ruled out a successful trial. Update – The film’s producer reassures me that there are many examples of suspects being named and going on to be charged and convicted.]

But those aren’t the only breath-taking moments in the film. This documentary has more false endings than a Bond film.

The suspected gunman and his wife (she penned an unsigned letter to a local politician naming the killers and also phoned the anonymous hotline, her voice recognised because she worked in the local police station canteen) still live and work close to Loughinisland. The film shows contemporary video footage of the reported gunman working in his cleaning and pest control business. He was arrested but not charged, and his house has never been searched. The relatives’ solicitor Niall Murphy asks why his wife has not been charged with conspiracy to murder given her admission of involvement in the letter.

The final reveal is shocking but not surprising: one of the gang of three who attacked the rural pub was an informer.

It’s also no surprise that the most senior London politician or official who would talk to Alex Gibney was Lord (Tom) King, former Secretary of State for Northern Ireland. (The longest serving SoS, Sir Patrick Mayhew, who was in post and attended some of the Loughinisland funerals died in June last year.)

Troubles documentaries and films tend to be as worthy as they are interesting. This one is an exception, an exemplar on how to tell an investigative story in a manner which gives dignity to the victims and their families, avoids politicisation and politicians*, and exposes the messy ‘dirty war’ that was thoroughly intertwined with the paramilitary action.

From a purely cinematic point of view, it’s a beautifully filmed and well edited film. Money has been spent and attention paid to details such as how flat typed information and reports are displayed on screen and enhanced with subtle sound effects.

If you go and see one documentary this year, I’d suggest No Stone Unturned is a very fine one to choose. The sense that this is merely 110 minutes of homicide-porn that only benefits the producers is vastly reduced by the revelations that go further than the Ombudsman’s report.

A screening later this week in Loughinisland will precede the film’s general release from Friday 10 November in the Queen’s Film Theatre as well as selected cinemas in the Movie House and Omniplex chains.

* Emma Rogan, daughter of Adrian Rogan who was murdered in the attack, is one of those interviewed in the film and was recently co-opted into the NI Assembly to replace Sinn Féin’s Chris Hazzard in the South Down constituency upon his election as an MP in the June 2017 general election.