Interesting oped by Alban Maguinness in the Belfast Telegraph. In particular, this bit…

Last week, Arlene Foster’s olive branch to Sinn Fein was summarily rejected. This was despite the positive and flexible tone of her statement and her promise, on the restoration of the Executive, “ … to bring forward legislation to address culture and language issues within a time-limited period to be agreed”.

She added that the DUP had nothing to fear from the Irish language in itself. [Emphasis added]

The penny drops, if slowly. Unionism never had much to fear from Irish. The most fluent person I encountered growing up was a Presbyterian lady who’d learned it in the YMCA in the 30s.

She gave me the Irish for Norway and Sweden in conversation as Gaeilge when cleaning her windows for a few bob in the late 70s. A key problem with current narratives in Northern Ireland is the inability to account for complexity (unionists and nationalists are both guilty).

It reduces every noble cause to a list of nit picks and invites folk to miss the bigger picture. I’d go with Alban up to the point he suggests that…

Sinn Fein has taken a strategic view that the Assembly and Executive are expendable and do not have to be restored. They are prepared to weather out the problems that direct rule from London will bring and put up with the freeze on politics within the north that would be consequent on direct rule happening.

In a nutshell, Sinn Fein have abandoned the partnership spirit of the Good Friday Agreement and strive to put themselves into a position of complete political superiority in the north and, in the meantime, concentrating all their major efforts in achieving power in government in the south. [Emphasis added]

But a careful look at history suggests something else. Sinn Fein was happy in politics with the DUP until Alban’s own SDLP withdrew from government. Without the Stoops, there was no one other than the big two to attract all criticism.

[“Deflector shield compromised, Captain“? – Ed]  Something like that, yes.

What Alban misses (or forgets) is that Sinn Fein’s story on RHI doesn’t stack. It never has. The deal with the DUP on that would have to have been done before the 2016 Assembly election.

That may be why the party disappeared it so quickly, replacing it with several more plausible demands.

We can now expect them to try to pressurise the SDLP to come back in and take up their previous whipping boy status in order to get that damned deflector shield operative again. Mr Eastwood would be well advised to make them sweat for that.

The other limitation of Alban’s analysis is that it seems to buy into Sinn Fein’s own talking point that they are on the edge of some sort of breakthrough in the Republic. As I’ve already said, I see narrow gains for them. But, it’s awkward.

Having accepted they cannot lead the next government they’ve now promised to enter government after the next election. And then, their most likely partner publicly denies them any such a place.

As Noel Whelan (no particular friend of the opposition leader) notes…

To those who might seek to argue that Fianna Fáil would say one thing before the election and do another after the election, Martin can point to the fact that they ruled out going into coalition with Fine Gael in 2016 and stuck with that policy after the election, albeit he facilitated Fine Gael’s return to government as a minority.

Whelan focuses on the defensive, but this was also an offensive by Martin by inviting voters to compare him with Adams. Despite SF’s roll forward last year, the chamber maths between SF and FF have shifted in FF’s favour (they’ve now more than double the TDs the smaller party).

Further gains for FF will widen and that gap and weaken SF’s influence. That odd content free announcement by Adams that he’ll remain SF President, whilst promising more in November, starts to look and feel like pressure.

The precise exegeses of southern politics matter far more than most (but not all) northern commentators tend to presume. And you don’t have to take recent internal rumblings to understand that things are far from the healthy state most northerners tend to presume. 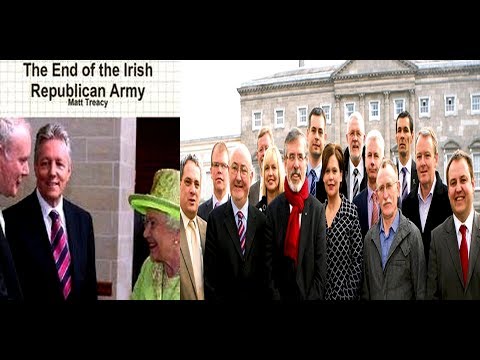 There are rumours (albeit from DUP sources) that the party is trying to push the deadline for a restart back to the Spring to cover any snap General Election (Leinster House can talk about little else just now). That would be a clear case of putting party before people.

True or not, the party’s excuses for the breaking the historic power sharing arrangement don’t add up: unless you allow for the possibility that Sinn Fein is just looking after party interests over that of its own electorate whilst winding up them up about “the meanness of the Prods”.

The danger for the party is that this liberty with the voters’ mandate may now be broadly embedded within the party’s general political ambit. In the south, they could be punished for such a deep lack of political seriousness just when the economic tide is rising.

In the north, after the party’s electoral apogee of March, the only road is down. And not just for Sinn Fein. Without a genuine successor to McGuinness (Martin, in case you’re wondering), northern nationalism is rudderless and ceding most of the credible ground to unionism.

And that’s not a game that ends well, for anyone.