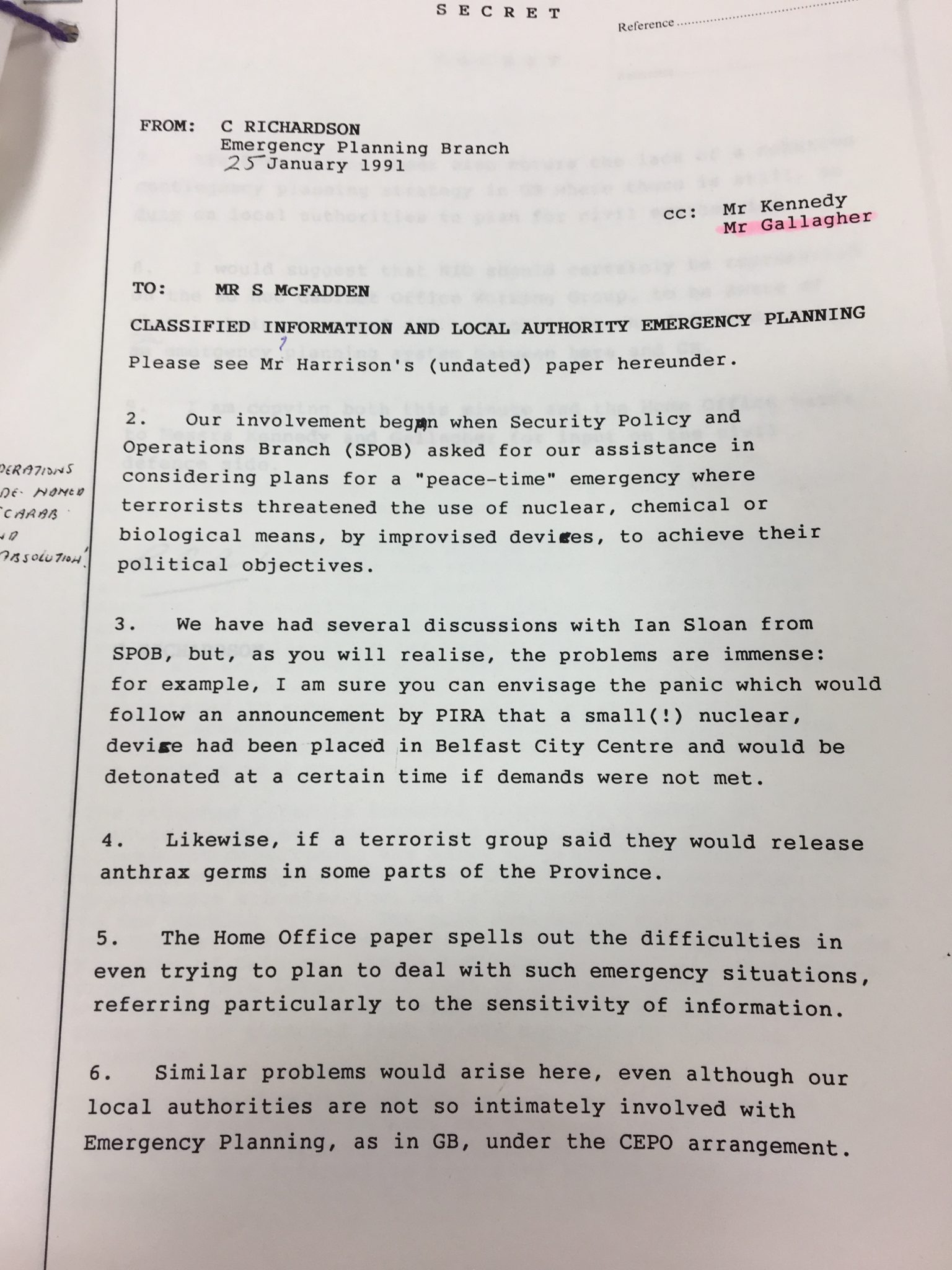 I am sure you can envisage the panic which would follow an announcement by PIRA that a small(!) nuclear, device had been placed in Belfast City Centre and would be detonated at a certain time if demands were not met.

Likewise, if a terrorist group said they would release anthrax germs in some part of the Province. 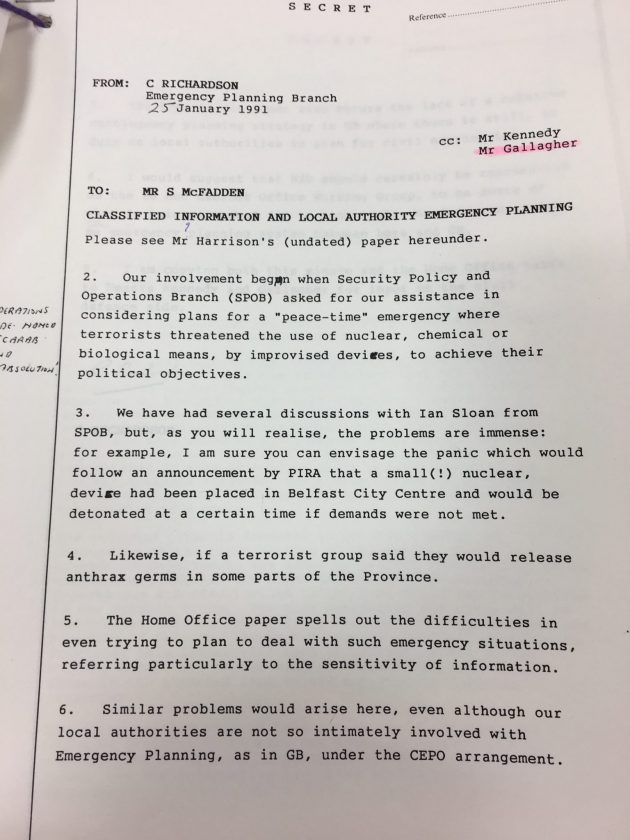 Those quotes from January 1991 are from a letter memo written by C Richardson to colleagues in the NIO Emergency Planning Branch (EPB). They are contained in an inch thick orange of correspondence about Northern Ireland’s contingency plans for a nuclear, biological or chemical attack, gathered by William Gallagher from the EPB. His file marked NIO/28/1/12A [selective scan] has been released under the 30/20 Year Rule and is now available to read in the Public Records Office.

Back in 1991 emergency planning officials considered the possibility that the IRA could threaten to detonate a small nuclear or biological device. They had moved on from the fear that a Russian satellite would drop out of orbit and spray it’s nuclear core over the landscape.

C Richardson was responding to a briefing from Ms Jane Harrison (though she’s referred to as ‘Mr Harrison’ in some of the papers) who worked in the Home Office’s Emergency Planning Division.

Her paper was neatly summarised by the NIO as addressing “‘peace-time’ emergency where terrorists threatened the use of nuclear, chemical or biological means, by improvised devices, to achieve their political objectives”. A scribble in the margin mentions “operations codenamed SCARAB and ABSOLUTION”.

This was the only discussion of paramilitary nuclear, biological or chemical attacks I found in the file.

In the event of a larger, nuclear attack on the UK from a foreign power, regional government for Region 11 – as Northern Ireland was designated – would have been accommodated in the blast and radiation protected Ballymena bunker whose construction finished in 1990.

The 46,383 sq ft site spread over two floors with air filtration and able to accommodate 236 people for 30 days after an attack is now closed and has been up for sale for over a year now, with the asking price currently sitting at £575,000.

Two smaller sites were proposed to be built in Omagh and Craigavon. However, policy changed and Ballymena was expected to be only backed up by a single reserve site in the west.

As well as rationalising the number of continuity government sites, the file examines the UK-wide plan to reduce to a third the food stockpile of biscuits, sugar, flour, fat and skimmed milk powder that were held in order to sustain the expected 95% of the population who would survive a nuclear attack for a period of 60 days.

Northern Ireland’s stockpile was stored in 7 large rented stores, and the reduction in reserves involved a plan to sell off some of the foodstuffs and shrink down to 2 or 3 stores. 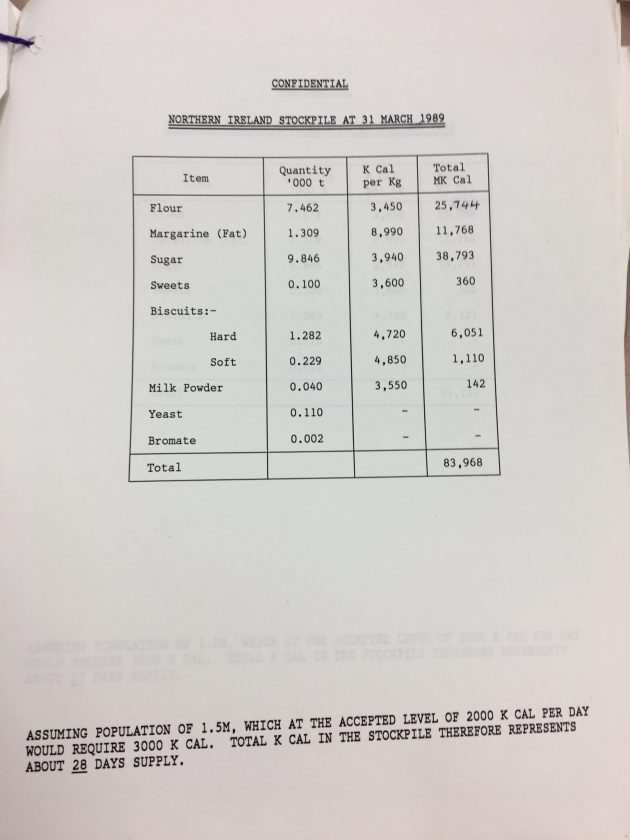 [While Home Economics was never my forte, I reckon that’s enough to make 250 million scones, though there is no mention of keeping a supply of glacé cherries nor a guarantee of heat.]

“however interesting an emergency may be, planning for it is viewed as a dull, unrewarding task”.

In those days, Northern Ireland had an emergency warning system that could use 200 sirens on police and fire stations as well as churches and another 1,300 hand operated sirens that would be issued “in a period of tension before war” to previously recruited persons (mostly farmers) and triggered by a signal from the RAF.

That network of sirens is no longer maintained. War will be announced by text message. The Emergency Planning Branch has morphed into the Civil Contingencies Policy Branch of the Executive Office with its extensive emergency planning arrangements that are no longer quite so concerned about the continuity of government arrangements in the aftermath of mushroom clouds.