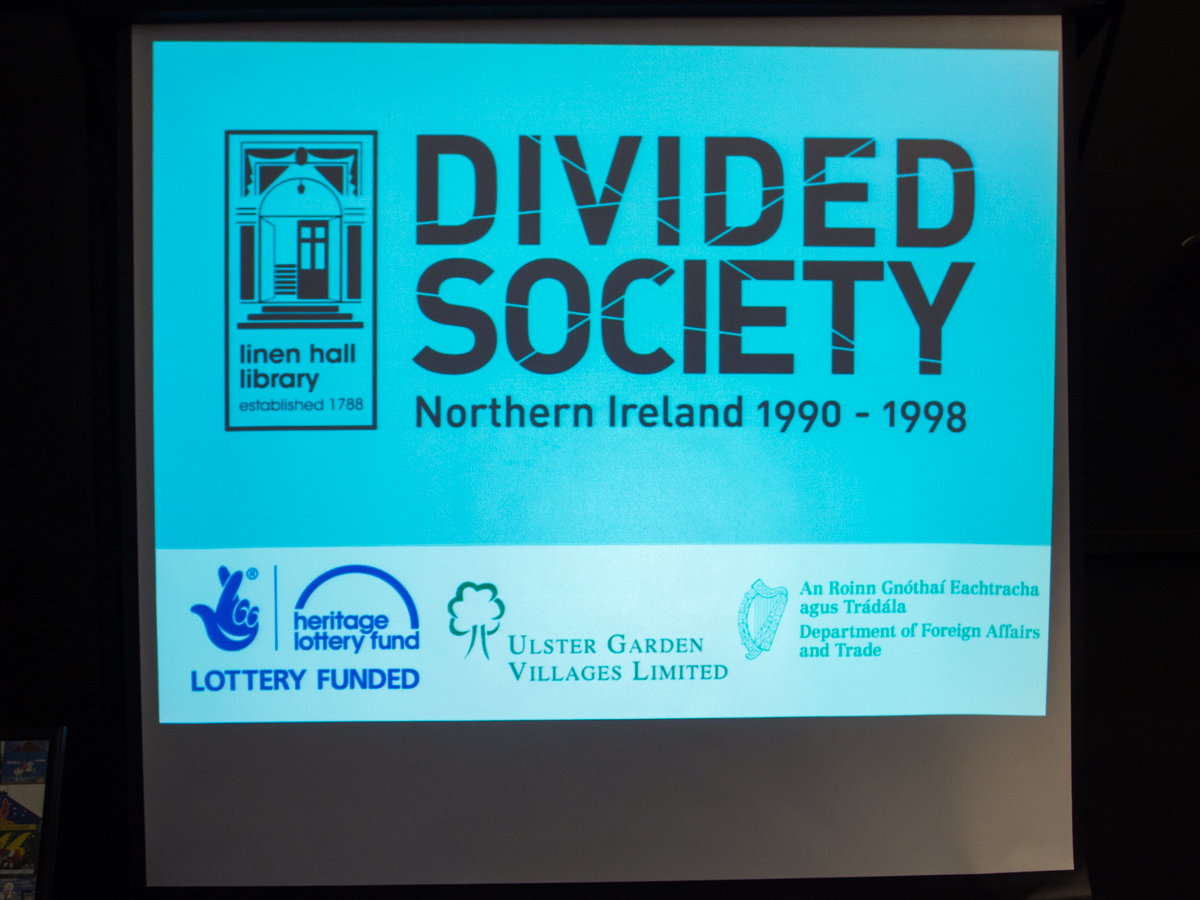 Exhibition launch: “We Lived It: The Social Impact of the Troubles” @TheLinenHall
by Allan LEONARD @SharedFuture
2 August 2017

The Linen Hall Library has presented the first of two exhibitions of its Divided Society digitisation and outreach project. “We Lived It: The Social Impact of the Troubles” contains artwork, imagery, ephemera, and oral history extracts from firsthand accounts of individual experiences.

At the launch reception event, Librarian Julie Andrews provided a background to the project:

“We thought it was time to start working on how to show this great collection we have to the world and engage much more with people.”

The total value of the project is £500,000, and she thanked the several funders right there and then.

Andrews finished by outlining the project’s planned outputs by January 2018, including: the digitisation of 120,000 items being made available online; the creation of education resources (GSCE audience); the collection of oral histories (involving 250 persons so far); and two exhibitions.

The Heritage Lottery Fund is a major funder of the Divided Society project. Its Northern Ireland chairperson, Paul Mullan, said that the question of how the Linen Hall Library reaches out beyond its membership base is “solidly answered” by projects such as this. He described how the library bringing out its holdings to engage with communities enables the participants to be “the curators of their own story, the curators of what heritage actually is”.

Mullan added that this project is particularly interesting because it deals with a challenging time — engagement with the past and “remembering well, remembering thoughtfully”, to think about the past “in constructive ways”.

“Let us delve into the archive and see how much we can get from it,” Mullan concluded.

Rachel Brady (Education and Outreach Officer, Divided Society Project) described the exhibition as a celebration of the outreach work carried out with several groups, of which some participants were in attendance:

“You all outdid yourselves, bringing humour, grit, inspiration, and sometimes sadness to the table … What really struck me was how our objects brought so many memories back for people; this is the true power of collecting and sharing in libraries, museums, and cultural venues.”

The resulting short audio excerpts explore experiences individuals had during the Troubles, such as getting to work during bomb scares, hearing about an incident in a local area, thoughts about the peace process, and what they saw as a ‘normal’ life.

Artwork has been lent by the F.E. McWilliam Gallery, the Newry and Mourne Museum, the Police Museum, and William McGivern. Examples include a Woman in a Bomb Blast sculpture by F.E. McWilliam and a selection of Photomontages by Sean Hillen (who arrived after the speeches and invited me to a delightful conversation over tea!).

She announced that there will be an exhibition workshop on 21st August, when visitors can bring an object and tell a story or just listen to others’ experiences.

Brady finished by thanking the project funders: the Heritage Lottery Fund, Ulster Garden Villages, and the Department of Foreign Affairs and Trade.

The exhibition, “We Lived It: The Social History of the Troubles”, is on display from 2-30 August 2017. Admission free.

My interest is in efforts to address ethnonational and other identity based conflicts, appreciating the power of belief and one’s adherence to particular world views. So, while it is useful to ascertain facts, realities are influenced by traditions and customs. I seek to learn and interpret this phenomenon, by making images and storytelling — documenting events and experiences of peacebuilding in Northern Ireland and beyond. There are many stories to tell.

Co-founder and editor of Shared Future News, which reports on peacebuilding in Northern Ireland. Co-founder and director of FactCheckNI, Northern Ireland’s first fact-checking service. Co-founder and secretary of FCT Belfast, a local member of the Forum for Cities in Transition, which is an international network of local government, business, and civil society representatives assisting each other with peacemaking. I also contribute to Northern Slant and Slugger O’Toole.