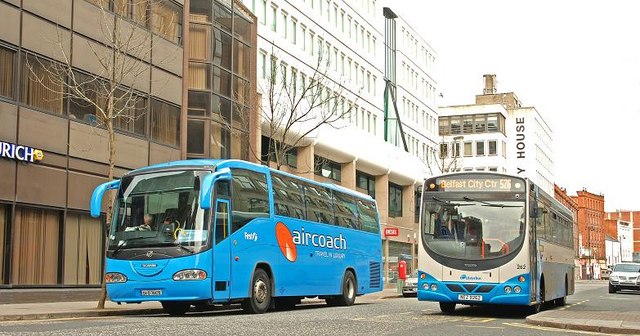 If you commute into Belfast by car, you will know it is a pretty hellish experience. Congestion is getting worse. At peak times the Westlink is like a car park. Trains are already at capacity, so the best option is to increase bus usage.

The Guardian has this to say about the benefits of bus services in England:

The M25 has 790 miles of lanes. If these are used by cars carrying the average load of 1.6 occupants, at 60mph the road’s total capacity is just – wait for it – 19,000 people. Coaches travelling at the same speed, each carrying 30 passengers, raise the M25’s capacity to 260,000. Every coach swallows up a mile of car traffic. They also reduce carbon emissions per passenger mile by an average of 88%. So one of the key tasks for anyone who wants to unblock the roads while reducing the real social costs of carbon must be to make coach travel attractive.

Now obviously that refers to England, but the principle would be the same for Northern Ireland. Ironically the biggest obstacle to getting more people using buses seems to be Translink, our local monopoly transport provider and DRD, the government department that controls transport. Time and again I hear stories of Translink and DRD blocking private operators from running much needed new bus routes.

Eamonn has been battling Translink for over a decade now, and he has some interesting tales to tell. It all gets very technical but essentially to be considered an Express service you need to drive at least 30miles between stops. If you drive less than this, you are considered a stage carriage service. As a stage carriage service, Translink was eligible for a Fuel rebate of an estimated 55p per litre. This added up to a £10 million a year subsidy to Translink. The rebate program has since stopped. As an Express Service Rooney was not eligible for the fuel rebate. So you had this perverse incentive for Ulsterbus not to run Express routes.

Time and again we see where private routes get established commuters flock to the service. The Air Coach has transformed travel between Belfast and Dublin Airport. All other Northern Ireland private companies are chomping at the bit to launch new routes and take commuters out of their cars, but they are being blocked by the existing monopoly supplier. Hannon Coach wanted to run a faster service with fewer stops from Derry/Londonderry to Belfast, but they have also been blocked.

Some tactics that stifle competition:

We, taxpayers, subsidise Translink to the tune of £140 million per year. Even with that subsidy, they are still losing £10 million a year.

DRD needs to open up the market. Monopolies just make the big players lazy and complacent. Without proper competition, there is no incentive for Ulsterbus to improve their service. Translink is actually losing passengers: Passenger numbers have fallen from 80 million to 78.7 million.

A government department blocking innovation in a market is ridiculous. To entice people out of their cars there needs to be choice. Why should I not be able to setup a luxury commuter bus from Armagh to Belfast with nice comfortable seats, a toilet, free wifi etc.

The only way to get more people out of their cars is to let private companies get on with the job of providing good quality services that meet the demands of their local area. We need to stop blocking enterprise and innovation. There is also the obvious question of if private companies can see profitable new routes why is Ulsterbus not servicing this demand?