Tom Kelly is right, now the most peaceful Twelfth in Belfast for years has passed it is time for people to move on. Even the bonfires, pushed to ridiculous proportions must now have the word Grenfell echoing in the ears of the organisers.

But move on to what? It’s far from clear. In absence of any sensible explanation as to why Stormont collapsed (and believe me, I’ve looked and cannot find anything that does not add up to some class of Mumbo Jumbo or another, the obvious truth is a failure in imagination.

A story appeared at the weekend, which was a marvellous example of John Lloyd’s 2005 idea of “Slow Journalism”. It was based on Eoin Butler’s Irish Times piece which highlighted the role of the local GAA club in Ballyhaunis in integrating migrants into the local community.

Often the simplest interventions are the best. The engine behind this one is the local hurling coach Darran Conlon who’s simple idea was to extend build upon the social lives of the kids at school in a town which the foreign-national population was 42 per cent at the 2011 census. 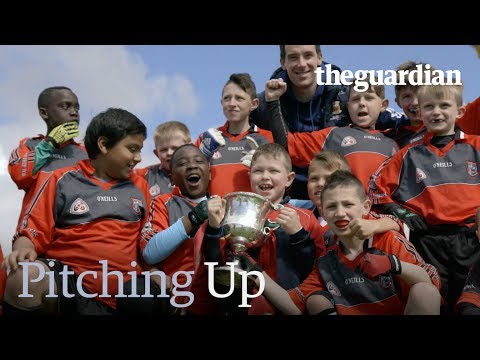 There’s a particularly telling moment when after having spent seven years in the direct provision centre in the old Convent building in the town, one African mother was persuaded by her son to stay because, he told her, that Ballyhaunis was now his home.

If we do this, communities, counties, regions and countries will thrive. If we don’t, we give the opportunity of a century away to the grifters.

Avoiding the choice, remaining passive on the sideline, is playing into the hands of those that are, right as we speak, wrecking things, tearing our social fabric apart..

You need to become bi-lingual, you need to be fluent enough in Comfort Zone to understand your own conditioning, your own stubborn resistance inside your passive contentment. You need to learn to speak Ballyhaunis.

It’s not that this sort of thing does not happen in Northern Ireland. The North Belfast Interface Games which place in the next week are a great way not just for kids to get together across tribal lines but to have their parents come along and watch them.

It has in common with Ballyhaunis a determination to find small ways to broaden the sense of locality in which everyone can belong. In the Co Mayo town, it also says, very powerfully, that Ireland’s chronically underdeveloped west is a place the new Irish can want to belong.

As my friend and occasional contributor to Slugger Ed Straw noted when he found the same piece independently from me, “it would be great if urbanites could learn something from ruralites, rather than seeing them as backwards or behind the time”.

As things transform, we need to respond differently to the agencies of change. What Ballyhaunis is trying to do (and by the measures used in the film is succeeding) is to embrace change, rather than, as we tend to do in NI, weaponise it.

What’s also on offer here is generally unrecognised simplicity of effective action. It doesn’t take a whole new strategy or a shedload of cash, it just takes is one or two individuals within a trusted social institution just to start doing the right thing.