One, Labour should approach any NI issue with some considerable caution and given the party leader’s record some humility too. It is not viable to defend John McDonnell’s kneecapping remarks one minute and then suggest the DUP is beyond the political Pale. Particularly if you have a credible ambition to run the UK. If, not then you can say what you bloody well like and ignore the following advice.

Two, you have to ask yourself what forces have driven so many good people to vote for a party with such a record? The answer is not simple, but part of it is rooted in the fact that Sinn Fein is still being run as by the same group of men who planned and executed the slaughter of Bloody Friday (look it up if you’re not sure what that was). People vote DUP because they want protection from Adams and Co.

Three, consider this prospective arrangement from the other angle. Participation in the next government carries a considerable reputational risk for the DUP in NI. The Conservatives have been far from considerate bedfellows to their previous partners in government, and odd as it may sound to mainland British ears, they remain far more toxic in NI than the DUP has ever been.

Four, the scale of the DUP’s victory was immense, especially if you extrapolate those gains on any putative Assembly. It’s plain disrespectful of a mandate that is beyond either main party locally. Labour should note in particular that its sister party was wiped out in this election and replaced by SF’s non-sitting MPS.

Five, it’s just too easy. White Protestant British Irish folk in Northern Ireland are routinely abused and demonised in a way no other group on these islands are. Len McCluskey got his pitch to the DUP perfect: pointing out that many his members voted DUP and did not vote for them to limp into a Tory-led government. Peter’s policy match up finds a non-Corbyn led Labour is a more viable partner to the DUP than the Tories.

Six, the invidious idea being put about by Powell, Campbell and others that NI parties cannot participate in UK government because of a Peace Process™ which is dying in part because of the UK and Irish governments’ standoffish and neutral approach to the various crisis we’ve had since the restart in 2007 is democratically ruinous, and treats the citizens of NI as second class citizens (apparently, for their own good).

And, finally… attack the DUP all day and all night for all I care. But that social conservative agenda is on devolved matters and is not coming back to London anytime soon. I think sometimes we’ve been conditioned by the Tabloids to think that just throwing any old monkey

? at our opponents creates space and license for our own ambitions. It doesn’t always. And sometimes it actually reduces them by fanning the flames of cynicism. 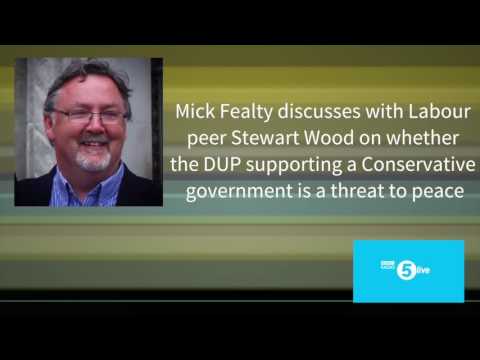