Say what you like about social media but the old fashioned papers are hard to beat to bring you the feel of the last minute election atmosphere. They’re  all the more frantic for the polls being all over the place and  late tragic dominance of “ keeping us safe.” 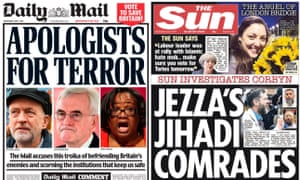 Later, after Mail on Line posted their attack on Corbyn etc

True to form  the Daily Mail devotes  THIRTEEN pages to monstering  the Jeremy Corbyn   “troika ” for acting as the IRA’s useful idiots  during the Troubles. If  they really wanted them to make much of an impact they’d have run them earlier. Their target must be the minority of last minute undecideds.

Yes, Mr Corbyn has impressed some with his quiet composure under hostile questioning. But he personally has spent a political lifetime courting mass murderers in the Middle East, Ireland and elsewhere in the world, affronting his party and its decent traditional supporters, while voting on 56 occasions against measures aimed at containing the terrorist threat.

Meanwhile, his closest ally, the Marxist shadow chancellor John McDonnell, has called for MI5 and armed police to be abolished, while saying that the IRA murderers of men, women, children, British servicemen and police officers should be ‘honoured’.

As for Diane Abbott, the clueless and incoherent woman in charge of the security brief, she has voted against anti-terror measures 30 times, while declaring in the past that any defeat of the British state by IRA terrorists was a ‘victory’.

Cheerleader for the IRA At an Irish Republican event in 1987, Corbyn took part in a minute’s silence to commemorate eight IRA men shot dead by the SAS as they travelled to attack a police station in County Armagh. ‘I’m happy to commemorate all those who died fighting for an independent Ireland,’ he said.

In 1996, the year of the Docklands and Manchester bombings, Corbyn invited Gerry Adams’s deputy, to the Commons with a group that included several suspected IRA terrorists. The Labour chief whip accused Corbyn of putting the Commons ‘at considerable and unacceptable risk’.

Corbyn put up £20,000 of his own money to stand bail for Roisin McAliskey, an IRA terror suspect facing extradition to Germany, where authorities wished to prosecute her for killing a soldier’s wife during a mortar attack on a UK army base. (Eventually, she was not extradited.)

While this is all great ammunition against the Labour left, Northern Ireland itself barely features in these purely British rows and our experience of coping with he Troubles has hardly been mentioned over the past grim fortnight. We’re just not part of the shared experience.

It hasn’t occurred either to the Mail and many others that in Northern Ireland we have had the real thing in government for a decade An essential condition for the return of power sharing after 2006 was Sinn Fein’s eventual acceptance of justice powers and  an effective  role in the Policing Board. Remember  dissidents skewered as ” traitors”?  If Martin McGuinness could change  his behaviour, so can Jeremy Corbyn.

But not Theresa May it seems. After a lacklustre campaign she is back to threatening to “ rip up “the Human Rights Act that  enshrines  the Strasbourg HR Convention into British law. “Rip up” isn’t her phrase but the Guardian’s , and shouldn’t have slipped so easily into  BBC use. Her position is more nuanced and may amount to a derogation or suspension of part of the Act in order to detain suspects for  longer or expel the deeply undesirable. The Conservative manifesto  already promises a review of the Act when the Brexit terms are known. Not a word anywhere about the entrenchment of the  Act in the GFA and how – or whether – it could be replaced.

Back home  Alex Kane is on the money in the Irish Times, stripping away all that anti-Brexit veneer.

But what all of this means is that the constitutional question is now nakedly and aggressively front and centre in Northern Ireland. That means that there will be less room for soft/moderate unionism and nationalism. That will change politics here, particularly in terms of the Assembly and Executive. It will put new pressure on Fianna Fáil and Fine Gael to address the unity issue. It could complicate matters between London and Dublin if there is a return to direct rule. If both Sinn Féin and the SDLP are now prioritising the need for an early Border poll and Irish unity, “sooner rather than later”, it will make it incredibly difficult to reach any consensus on any other issue. It’s now all about identity and numbers. Nothing else matters.

It’s hardly a day for  balancing factors. But  if middle ground parties are to be squeezed in the polls, compromise in some form has to come afterwards from the victors if they are to win  the necessary margin of moderate opinion in a new tournament of the numbers game. So  when it is time for back to the Assembly? After the marching season?   More of that after the results.  Meanwhile my favourite post election scenario comes from Ruth Dudley Edwards.

In the alarming event that the general election produces a hung parliament, expect the republican movement’s inner circle to respond to its friend Jeremy Corbyn’s plea for help by having Gerry Adams (and appropriate sidekicks) fly to London for talks before calling an emergency party meeting to approve Sinn Fein taking its seats in Westminster.