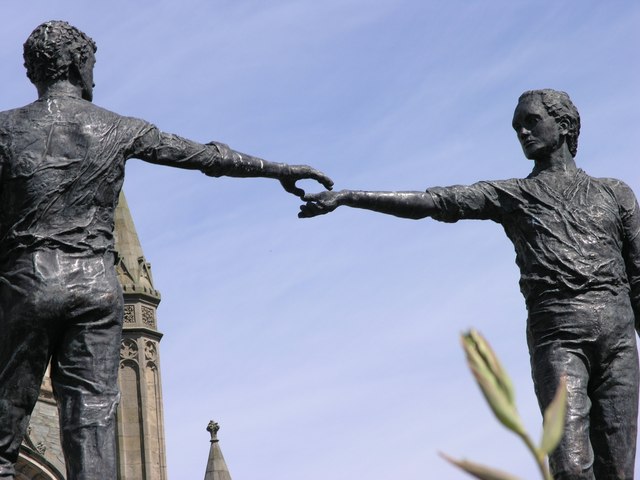 “Of all the ‘moments’ in my 27 years of journalism, applause for Arlene Foster at the funeral of Martin McGuinness is right up there”. So remarked Sky News’s Ireland correspondent, David Blevins, after one of Northern Ireland’s most important funerals in years.

Blevins wasn’t alone in being wrong-footed by this turn of events. This was, after all, the funeral of a former IRA commander – held in a staunchly nationalist city during the uncertain aftermath of a landmark and divisive electoral contest. An election in which the leader of the DUP had increased her party’s support by baring her teeth at aspects of Irish culture and republicanism. And a funeral where speculation had been rife in advance as to whether, as a double childhood victim of IRA violence, she would even attend what must have felt to her like a step into republicanism’s crocodile enclosure. Expectations had pre-ordained Martin McGuinness’s funeral to be more likely to harden hearts than to open minds. Yet the people of Derry understood the political, symbolic and personal effort involved in Arlene Foster’s attendance, and they made sure she knew it was appreciated. Her entrance was greeted with a spontaneous standing ovation, and a second round of applause followed later when Bill Clinton referenced her in his eulogy. Remarkably, people queued up outside the church to thank Arlene for attending and to clamour for photographs with her. It was Northern Irish politics’ very own wartime Christmas truce moment. And the world reacted with wonderment.

Events unfolding in such an unexpectedly positive manner surprised many, but not those who know Derry well. Since partition, the city and its people have had much to feel resentful for. Whilst the pre-1972 Northern Ireland Government routinely discriminated against Catholics as a whole, no town or city faced the level of institutional injustice that Derry did. For centuries the city had been unionisms’s Jerusalem – a place they were determined to retain control over in the face of demographic reality. And it came at a huge cost to the city and its people – through gerrymandering and ghettoisation for the catholic population, physical isolation via the removal and refusal of infrastructure, and a wilful economic neglect for the city as a whole. For years Unionist politicians seemed happy to see Derry ruined, so long as it could remain their ruin. Little surprise therefore that it was in that city that the Northern Ireland Civil Rights movement began in the late 1960s, and where the first spark of the Troubles was lit shortly afterwards.

Whilst Derry’s darkest days are over, there remains even now an element within unionism which seems surreptitiously to promote an ongoing punishment-by-neglect for this lost citadel. Derry consistently tops the UK’s unemployment league table, with the Belfast-centric Stormont Executive showing little interest in tackling this badge of dishonour. Derry remains the only city on the island not connected by a motorway or dual carriageway, whilst its one remaining train station is the most isolated on the entire Northern Irish network. And fifty years after the city – protestant and catholic alike – protested in anger at the controversial decision to site Northern Ireland’s second university in Coleraine, Derry still awaits a proper university. Of the 15 towns and cities across the island with Higher Education institutions, Derry has by-far the worst provision. Even now the University of Ulster continues to wind-down Derry’s Magee campus and claim that it doesn’t have the money to expand it, whilst pouring £300m into relocating their Jordanstown facility into a Belfast with an already large student population. Derry has much to feel aggrieved about within its past, and more still regarding its present.

Yet despite this Derry has led the way in recent years on ways to try to bridge the religious and cultural divide that fractures communities across the province. Take parades. Throughout the Troubles the twice annual Apprentice Boys of Derry marches had been a source of division and conflict within the city – with even NI’s thirty year conflict itself triggered by the aftermath of such a parade in 1969. Yet for over a decade now tens of thousands of loyalists have been able to march through the heart of this nationalist city every six months without real incident or opposition. Even the city’s Catholic Bishop has begun attending the parade’s war memorial wreath-laying service. The tolerance shown towards loyalist parades taking over Derry’s city centre twice a year is simply unparalleled within Northern Ireland, and came about as the result of years of careful dialogue and mutual respect on both sides.

Likewise when it comes to Irish culture. Fleadh Cheoil na h’Eireann – the world’s biggest celebration of Irish music – was held in Derry in 2013 amid fears that the event would be marred by trouble and division. Instead critics were confounded as over 400,000 visitors contributed to a mardi gras atmosphere in the biggest Fleadh ever held. The event surprised further when its Derry-based organising committee proactively sought the involvement of the loyalist and Unionist community within it. As a result The Apprentice Boys headquarters was included as an events venue, and loyalist flute bands also took part – with Ireland’s oldest (The Churchill) even featuring in the closing ceremony. It was the first time in the event’s 62 year history that anyone had even thought to include music from Ireland’s loyalist tradition, and flute bands have been invited to participate in the annual event again since.

And when it comes to sport – an arena marred by much division within Northern Ireland – the city similarly strives for inclusivity. Martin McGuinness was well known as a supporter of Derry City FC. The Candystripes are located in a doggedly nationalist area of the city, play in the Republic of Ireland’s league and are generally labelled as a catholic team. Yet despite that it is rare indeed to see Irish flags displayed by the home fans at Brandywell stadium. Instead, Derry City’s fan culture has for years focused on the team’s red and white colours in a conscious attempt to eschew the sectarian symbols that are commonplace at other stadia in the North. The club itself even decided to ban the display of national flags a number of years ago – something which would be unheard of within the Irish League. In a province where many supporters cherish the exclusive identification of their team with one or other religion, Derry City and its fans are attempting to make their matchday experience one of football and local pride rather than politics and national identity.

There are other examples too, but none of this is to suggest that Derry is a problem-free poster boy for a shared society. It isn’t. The gradual retreat of the city’s protestant population to the eastern side of the River Foyle throughout the Troubles may have spared Derry from much of the inter-communal conflict that afflicted Belfast throughout the Troubles. But it was a silent tragedy none-the-less, and one that will take years to reverse. Even the city’s name is a particularly thorny problem and a well-known source of division and upset. Places and institutions can really only have one official title, thereby risking the affront of either community when choices are made. But as habit now dictates, the city has attempted to navigate towards a compromise on its name as well. What Gerry Anderson once labelled ‘Stroke City’ has morphed into the widely used ‘Derry-Londonderry’ hyphenation in recent years. It’s far from perfect, and in some ways pleases no-one, but it is symbolic of a city that is genuinely trying to bridge division and promote mutual respect.

So when Arlene Foster entered Derry’s Long Tower Church last Thursday to a standing ovation, it was just the latest example of a city that refuses to cling to the conflict and hurt that history and current circumstances dictate that it should. The only real surprise to those who know Derry is that it has taken the rest of Northern Ireland so long to finally notice.

Steve Bradley is a native of Derry who moved to England for university 25 years ago, and has yet to return permanently. He works as a consultant on urban regeneration and environmental sustainability. He also writes on sport, politics, history, heritage and the environment for a number of publications – including a regular page in football magazine ‘When Saturday Comes’. In his spare time he is a social entrepreneur – specialising in turning neglected corners of cities into cultural, arts or heritage-based projects. And earlier this year he led the campaign to have Derry included as a venue in Ireland’s bid to host the 2023 Rugby World Cup.

Steve Bradley is a commentator and regeneration consultant from Derry. He can be followed on Twitter: @Bradley_Steve