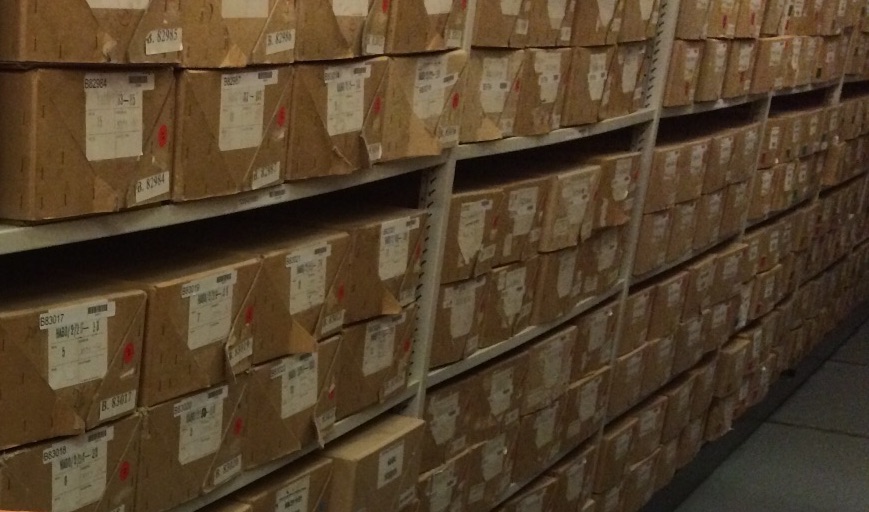 Over a week in the middle of December I spent a lot of time in the Reading Room of the Public Records Office of Northern Ireland. On top of desk 20 sat an A4 file with over a hundred pages listing the names and numbers of files that will be released tomorrow (30 December) under the 30/20 Year Rule.

When the embargo lifts on Friday morning you’ll see some stories here on Slugger O’Toole as well as in local newspapers and broadcast media outlets assessing how these old records shine light on both historical and current politics and political figures as well as Northern Ireland society. We’ll also see records that will be released in London.

Like a kid let loose at the pick’n’mix in Woodsides, everything on the list of files looks like a mouth-watering morsels. But it’s only when you taste the records order up and read the records that you discover whether the unknown titbits are flavoursome or bland.

Up to five files can be viewed at once. They appear in the Reading Room ten or so minutes after handing in a list of file numbers scribbled down on a slip of paper (in pencil, no pens allowed).

The titles of files only give a small clue to the contents. A single photograph might arrive in an paper envelope, or a set of detailed plans for a building project that have to be folder out over the large Reading Room tables.

A contentious-sounding title might result in a thin paper file being extracted from the archive with a single newspaper clipping stuck inside. Order a set of ‘personal papers’ and a reinforced cardboard box might be wheeled towards your desk on a trolley containing irregular sized items that wouldn’t fit the normal A4 treasury tagged folders.

Back in 2011 the Assembly accepted a legislative consent motion to reduce the time limit for the release of these civil service papers from 30 years down to 20 years. So for a period, records are being released every six months rather every twelve until we catch up. ‘1989’ appeared in August and ‘1990’ will become publicly available just after midnight tonight in the traditional post-Christmas slot.

Not all the records pertain to 1990. Some files are from the 1980s and their release was delayed; other files may have remained open for multiple years and were only closed in 1990.

While it was clear by looking at the thickness of some files, or the number of continuation files opened, that certain fairly unsurprising topics had exercised ministers and their civil servants during the relevant period, a single letter from a member of the public or a piece of correspondence from a politician could also generate an enormous flurry of questions, internal letters, briefings, advice and ultimately (and quite predictably) came to nothing.

While sitting in PRONI it was difficult not to read some of the records through the lens of 2016. Looking at Northern Ireland Office political briefing papers and records of conversations with local political figures made me wonder what the NIO will have distilled from their contacts with the political parties and their changing dynamics during this year.

Some of the papers on desk 20 in front of me contained lessons drawn up after a previous public sector financial scandal while a couple of miles away in Stormont the Renewable Heat Incentive scheme was continuing to generate more heat than light.

A small amount of what is in the papers is of course already in public domain. For instance, a file would sometimes include a copy of a published report of the proceedings of a House of Commons select committee. It’s not all salacious. Much of it is dull and routine. But reading the material as a bundle of documents adds context and gives a feel for why it was germane at the time.

Aside from the political and economic background, I also got a sense of the technology revolution that was slowly sweeping across the civil service, replacing electric typewriters with word processors, and swapping out daisywheel printers for dot matrix technology that allowed the reproduction of proportional fonts and a move away from Courier.

I found a mixture of typewritten, word-processed and hand written content. Telex was still in operation for urgent international communication. Faxes – back then referred to as ‘telefax’ – were much in evidence, of poor quality and incredibly hard to read. The quality of paper varied enormously, but nearly everything was printed single sided.

The laborious nature of typed correspondence did not seem to limit the detail of what was recorded. Permanent secretaries and their senior staff had an ability to dictate detailed and precise notes which were typed up as minutes of meetings. Sometimes ensuing drafts of a minute can be found in the archives, allowing the 2016 reader to see how phrases and emphasis were changed. Often formal letters were typed up and sent with review comments and corrections to notes and minutes.

I suspect the quality of the output and recording from this period would amaze modern minute takers and officials who (a) are afraid of recording anything other than an action point for fear of an embarrassing Freedom of Information request; (b) suffer from email chains with multiple, sometimes competing, replies asking for changes; and (c) enjoy the simplicity of wording and rewording a sentence or paragraph without ever having to commit it to paper until the very last minute.

It’s most likely that when the 2016 records are released – in 2036 if Freedom of Information doesn’t excavate them earlier – gone will be the droll asides that pepper some permanent secretaries’ minutes, often typed into the main text, sometimes annotated by hand. I pity the Departmental Record Officers as they review modern email archives. Keyword and by-author searching will be a much more important part of unearthing the stories in departmental records in the future.

The two stage review process that selects which documents and files to preserve is detailed in PRONI’s information leaflet. Given that the number of files released for a typical year is measured in hundreds rather than thousands (though amount to tens of thousands – perhaps even hundreds of thousands – of pieces of paper) it is clear that generally it’s the most senior correspondence and files that are deemed worthy of permanent preservation, while much lower-level humdrum communication and reporting are lost.

The government papers will be available to order in PRONI from 9am on Friday 30 December and their titles should become visible in their ecatalogue too. Keep an eye on the News Letter and Belfast Telegraph for Sam McBride and Adrian Rutherford’s analysis as well as contributions from Eamon Phoenix in the Irish Times and Good Morning Ulster. Over time, some of the more important documents will be digitised and hosted on the CAIN website.