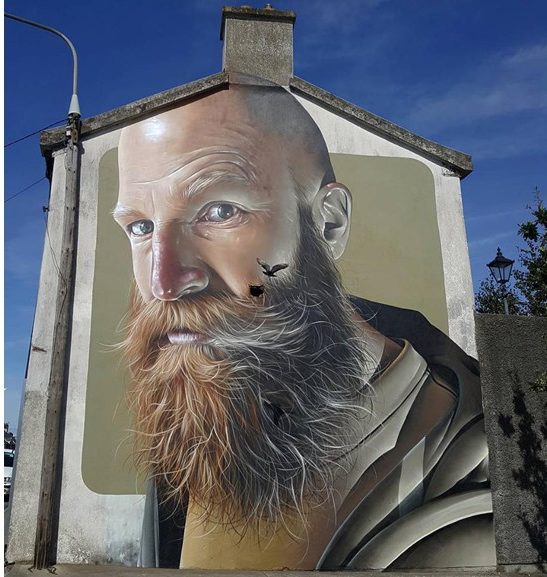 You don’t have to think (as I do) that Belfast’s street art puts a priceless, living vein through the heart of our city to be fascinated by how those ‘walls’ happened and where the local scene behind them is going next.

Taking Dermot McConaghy as a great example, the established street artist explained how the scene has grown and where we might see the art appearing next. He also talked through the personal journey which brought much-loved pieces like Long Runs The Fox (North Street and below) and 3 Missed Girls (Corporation Street) to life.

While Dermot is no spokesman for the scene and the story behind every artist is different, his route to living the life of a professional in his craft – marked by hard choices and an uncompromising sense of purpose along the way – reveals plenty about the thoughts, trials and motivation of a successful street artist. It also recalls the local scene’s link to the ethics of Terri Hooley’s punk Belfast, perhaps even the 1990s rave scene, and asks us if our street art is purely non-political or actively anti-political as a result of the events of our past.

A proud product of the ‘tech’ – or further education – college system, his path to becoming established also speaks to the current rise in practical learning through apprenticeships and how, in a generation which bore witness to recession life, owning little and maintaining an unwavering focus can give the flexibility to take opportunities which would be otherwise by smothered by 9-5 working.

Dermot, who signs his pieces as ‘DMC’, explained that his route to life as an artist has taken in a factory redundancy, failure in school but academic achievement through a local college, a very significant response to online criticism and “working from the boot of my car” along the way. Starting out in the far from urbanite environs of Lurgan, in his youth Dermot was “handed a spray can by a friend Conor Martin who said I’d be better with it” but held back due to that other, more territorial style of street art: paramilitary murals and graffiti.

“There was no scene in those days that I could see, only murals in Lurgan. Any graffiti could be seen as sectarianism-related so I didn’t really go around tagging as people would know it was me that put it there, by that young kid who is into art. I was aware that it wouldn’t take much for people to connect me to the tagging so I only did it in areas where no one would give a shit.

“Back then I felt vandalising your own area could be seen as a so-called crime against the community and in a way it was a kind of deterrent for me.”

A trip to London in 2002, then, was an eye-opener: “It was in London I saw my first Banksy piece and it blew my mind. But up that point I just didn’t believe Lurgan was somewhere it could happen. I guess something changed in me at that point”.

Fast-forward a few years and Belfast now “holds its own and is really on the map” alongside vibrant scenes in cities like Dublin and Waterford after the “pieces really connected later on”. In fact, North Street is even included in a Belfast City Council-sponsored Visual Arts Forum art map for visitors alongside the likes of the Mac and Black Box.

Back to Dermot’s youth, though, and a decision from his school that ‘“they wanted rid of me” became a defining career moment in a very, very positive way.

“When school didn’t want me back it gave me the opportunity to do art full-time at a technical college. I took a GNVQ in Art and Design, a BTEC in Graphic Design, an HND and even a Creative Imaging BA through Southern Regional College (SRC). Now I give a lecture there every year and worked for two years as a part-time lecturer giving learning support on the same degree course that I graduated from.”

He explained that studying art brought him into contact with entirely new groups of people and shaped his view of the world today: “Studying under nuns in St Micky’s was one thing, and school did have a very good art teacher, but I always wanted to push ideas as far as possible every time during my studies. Something else leaving school for SRC taught me was the experience of being around mixed religions for the first time too.

“Through this and through art I’ve formed a lot of my thinking and open-mindedness. I’ve done graffiti workshops with a big range of groups, such as young Muslim men, LGBT groups, the Traveller community, ASD and more. I still do to this day.” (A piece by Dermot at Corporation Street, now partially covered)

The seeds of his own personal ambition sown – “I wanted my own studio and all of that but I did one job interview and f***ked it up” – Dermot still wanted to “go out and show what he can do” but felt that working for a client was “not really my path as it felt kind of wrong, the job/ processing was draining as it’s like constantly giving away ideas to other people”.

So, his lifestyle today of constant teaching, workshops, events and occasional commission work grew and continues at ever-increasing pace: “I’m always working on something”.

But first another turning point – like his departure from school and a later redundancy from factory work – came with a comment on the Broadsheet.ie website, where a commenter launched a personal attack on Dermot’s approach to his work.

“Someone took a screen grab of a FaceBook post I’d written about an artist at an event who – I felt – was advertised as a token ‘local artist’. My point was this; why can’t he just be an artist and not there because of his Postcode. This rant was later posted onto Broadsheet.ie and I found myself being trolled by lots of keyboard warriors.

“Someone called me a ‘naive work-shy dreamer’. I may be naive and a dreamer but I’m certainly not work-shy.

“All I wanted to do was show that I could survive as an artist and not have to go back to factory work. But, yes, naive and a dreamer but hard-working. I then wanted to prove the person wrong. My lifestyle changed and I began to take art even more seriously. Everything in life became even more connected to work. And before I would have said yes to anything. All that stopped.”

The great, combined work of the Hit The North event, Culture Night and Adam Turkington (one of the hosts of the unmissable Seedhead Arts street art tour) then took Hit The North from painting shop shutters to launching Belfast into much wider acclaim by delivering many of the pieces we enjoy across multiple streets in Belfast.

“Culture Night has brought everyone together and has shown that Belfast has a voice through the people from here and who come here. Adam understand the artists a lot better so he can be a go-between between the wall owners and artists. It has meant Belfast is now on the map with Waterford and Limerick and Dublin as having a serious scene here.

“The results also bring a lot to our city as people are visual and it can be a break from the mundane. It is a big, bold art form. It grabs attention and starts conversations and turns a grey pallet around. The colours used go beyond the norm but they belong to everyone.”

And although Roscommon artist Joe Caslin’s outstanding marriage equality paste-up piece (which was installed with Dermot’s help and features a Smirnoff-sponsored information display, see below) marks Dublin’s strong contrast to the mostly non-political/ campaigning tone of mural street art in Belfast, for Dermot – who “got into art to avoid politics” – the door is open in Belfast for more of this type of art. But isn’t a direction he plans to take.

BEYOND THE CITY CENTRE

A new outlet for Belfast street art, Dermot explained, could involve steps to also take the work out of the city centre: “It would be great to see street art spread out into the estates by way of alternative art projects. It is really where it needs to go. It wouldn’t be easy and it would need community involvement but it would mean people in the area would see the walls on their way to work, going about their daily business, and would even mean a street tour could take people into new areas of the city and get a feel in a new way for the punk thinking behind it.

“After all, when I hear people from the punk days telling me about that used to go on, we are doing the same for Belfast except their scene was audio-based.”

As it stands, exciting work by artists including (there are too many to list here) JMK, Conor Harrington, Visual Waste , Emic (responsible for stunning 3D pieces), KVLR, Friz (“her irish mythology illustrative work is some of cleanest around – really sets the standard”), Inkie and Verz can be seen in Belfast’s North Street and wider areas alongside work by visiting artists including the piece below by Smug.

While Dermot is often cautious of gallery shows – “ours is a sub-culture without validation from the art-heads, I guess I dislike bothering with proposals and paperwork, street art worked for me as it’s basically exposure but with minimum red tape” – if “handled by the right people like Adam” he would welcome a large-scale show being organised to bring the street artists seen in Belfast into one place.

WHAT NEXT FOR DMC?

And the future for Dermot? While he doesn’t pretend the life of a street artist is an easy one, after all hours of work can attract graffiti tags, vandalism and even pub-goers urinating on the piece itself before the art eventually fades away or ends up being covered over, he plans to “be smart” and keep a professional approach to new find ways of working.

“I’m interested in large murals, more conceptual visual art, photography and painting large pieces. Street art is not all I do now but I do have some plans for street art in a very new form. In the meantime, putting out more prints and taking things up a notch means being smart as a few wrong moves could put me back in the real world.”

With an undistracted work ethic, Dermot’s habit of turning a closed door into a opportunity comes thanks to his ‘travel light’ mentality: “I don’t own anything and I don’t want anything except to maintain my work. All I have is a 1998 estate called Patricia, my phone, a DSLR, a lightbox and some paint.

“Living a happy life is worth more than anything.” (A wall by Dan Kitchener from this year’s Hit The North event, photo – Seedhead Arts)

* NB – This piece focuses on Dermot and specifically street art murals, his preferred style. Entire layers of street art exist beyond the scope of this article such as stencil art, sticker art (including protest/ campaigning stickers etc), yarn-bombing and graffiti (including ‘ANCO’  and many more). See Twitter accounts including @bfast1, @bohoman and @belfast_beyond. Also sites such as here and here as well as the Signs of Belfast account. Belfast murals of all types, including street art murals, are featured on sites including the Extramural Activity blog. All photos used with permission and belong to the respective owners.

He also blogs at: