David Ford has always been candid about not wishing to hold on as leader of the Alliance Party any longer than necessary. After fifteen years of being re-elected to the position each year, he has given up waiting for a tap on the shoulder and taken matters into his own hands and announced that tomorrow at noon his resignation as party leader will take effect. A three week process of nominations and election will return a new leader on Wednesday 26 October.

… we have the new Assembly team in place, well established individuals showing leadership in their committees, in the chamber and in their constituencies, and a number of private members bills underway. So it is right, now, that somebody else should get the opportunity to take up the baton and take the next step forward for the party. 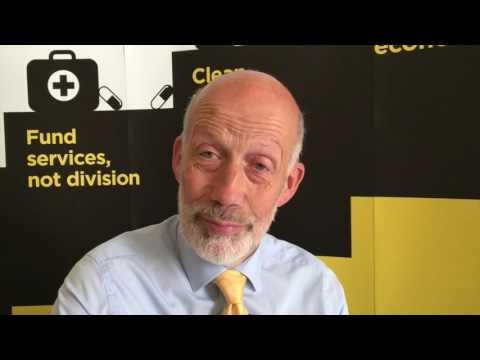 He singled out the personal privilege of being “the first local Justice Minister for 38 years” as significant during his time as leader as well as the election of Naomi Long to Westminster. He also remembered the “difficulties around the flags dispute” with the threats and attacks on colleagues and their offices.

The party hasn’t lost an Assembly seat under his leadership though he admits that “we haven’t made massive gains”.

We have moved from a position that in 2003 we had six seats but there were only three of them really safe, to a point where all eight were safe this year and indeed there could have been another two, three, maybe even four if we’d stretched it – we just didn’t have that particular luck this year.

He doesn’t think the party has “any significant regrets” during his period in charge: “we have had the opportunity to make our mark, we’ve clearly stood out as a party with a different philosophy, a different background, and I think that is shown in the way we’ve conducted ourselves and had that, admittedly, modest growth …

The party still faces “the challenge … to continue to put forward our proposals to build a united community to make a real difference to this society”.

There is clearly much to be criticised in how the current Executive is conducting itself. The challenge will be to do it in the context of a different, alternative vision and not just nit-picking around minor details. We can join with others on some areas, but I think we still have a unique vision …

It won’t be a coronation on 26 October.

Even if there were only one candidate’s name put forward, they still have to be seen to have the confidence of Party Council. [Ed – that’s 50% + 1 of the 250 council members.]

David Ford is vague about how long he will remain MLA for South Antrim. He pivots the question away from dates and times to explain that “I have plenty to keep me occupied at the moment”. He’ll be occupying himself with his return to the Agriculture and Environment Committee, spending more time on constituency issues “which get somewhat neglected if you have a busy ministerial diary” and his private members bill around abortion in the case of fatal foetal abnormality.

So there’s plenty to keep me going for a while.

But beyond next summer?

If you think all those things are going to be done by next summer you’re more optimistic about procedures in this place than I am!

Succession planning is important in this and all constituencies with single Alliance representatives elected to the Assembly. Having attending the Boundary Commission hearing this morning, he notes that there will “very significant change whatever happens to South Antrim constituency”. In fact the party might be looking for two successors across the new constituencies.

The Alliance leader’s phone is overwhelmed with kind messages today. Amongst the tributes he hopes “there is something there that people can say that Alliance stands for [and] I had the pleasure of being the leader of that team”. And “the Department of Justice achieved things in six years that were perhaps more than what some people thought would be possible”.

And the question he’s been asked most often today: would he accept a peerage (assuming the Lib Dems nominate him next year)?

Awk, not that old one again!

I have made it clear that the last time I was offered a peerage was when David Trimble was trying to do a deal around a Westminster election. My commitment is to the people of South Antrim who sent me to the Assembly five times [and] to the work that has to be done in Stormont.

While there’s a popular belief shared by politicians in other parties that David Ford is a power-hungry political animal, it’s never come across when I’ve interviewed him. He’s definitely not in a rush to jump to “the other place” and perhaps even reluctant to see the value of doing so.

I really am too old to think about jumping on a plane every week to go to London.