Bobby Sands: 66 Days is a 105 minute documentary film that weaves together the story of 1970s and 1980s republicanism with day by day updates on Sands’ condition and diary entries throughout his hunger strike.

The documentary film is bookended by quotes from Fintan O’Toole. In one he describes the 1981 hunger strike as “drama at the absolute rawest edge it could possibly be”. In the other, the author and commentator says that, like 1916, 1981 was also “undoubtedly a turning point” in Irish history. 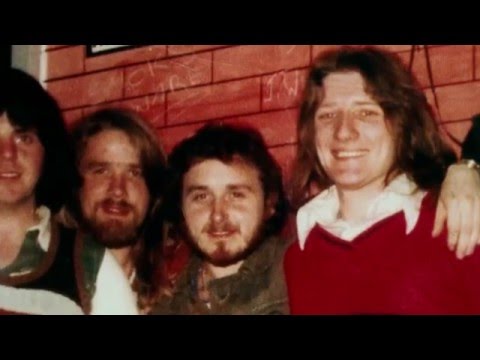 66 Days uses a peculiar melange of styles and devices. Far too much explanatory text appears on screen. We see a replica cell being built out of wood which is used to stage images from the cell to illustrate changes in Sands’ environment. Some animation is employed. And with very little footage of Bobby Sands and the other hunger strikers, his presence is mostly conveyed through his poetry and other writings alongside rich imagery, photographs and archive news footage of events outside prison.

Amidst this hotchpotch of storytelling, the director Brendan J Byrne and editor Paul Devlin create some interesting cinematography – running footage of car bombs and shootings in reverse, and slow motion republicans bands drumming – creating space for audiences to pause and think about events.

The international dimension and reporting of the story is highlighted with an ABC News ‘Special Report’ announcing Sands’ death. A sense of morality is (not so subtly) introduced through a reading from the Bible.

“He stopped being a soldier and he became an artist – his body taking so much punishment.” (Finton O’Toole)

There’s a lot of hyperbole in the statements made by the (predominantly male) experts interviewed for the film. It’s clear that the republican family was happy to cooperate with its making, with contributions from Danny Morrison and Séanna Walsh. Gerry Adams is interviewed wearing a Féile an Phobail t-shirt.

Thomas Hennessey adds a welcome academic and historical perspective to the political and cultural commentary: he’s one of the few talking heads that brings any energy to his observations in this overly long film.

At one point the voice of Ian Paisley booms out of the screen. While the general lack of overtly unionist voices – Norman Tebbit is an exception – doesn’t lead to any overt romanticisation of Bobby Sands, it does make the narrative a bit boring (if ‘boring’ is ever an apt word to describe a film about people starving themselves to death).

It’s difficult not to compare and contrast 66 Days with Steve McQueen’s 2008 film Hunger which achieved a much better balance with its examination of the work and lives of prison officers alongside the central narrative of the republican inmates and the conditions they lived in.

Where 66 Days does a better job than Hunger is in conveying – though perhaps, overplaying? – the untypical background of Sands: the boy from Rathcoole who played in a cross-community football team.

At times 66 Days seems contradictory. Early on one voice tells the audience that there’s a long history of hunger strikes; later we hear that “hunger strikes are peculiarly modern”.

The film doesn’t make Sands out to be a hero; but it is clear that many of the contributors do view him in that light. The pain in the voices of Sands’ election agent and fellow prisoners who survived is still evident as they recall saying goodbye.

Much is made of an old quote from 1920 hunger striker Terence MacSwiney that “it is not those who can inflict the most, but those that can suffer the most who will [win],” suffering publicly and over a long time. While the contributors outline the reasons behind the prisioners’ decision to go on hunger strike, the alternatives – or the reason why this drastic and (in many people’s opinion) wrong course of action was taken – is left unexplained.

Fintan O’Toole concludes with a central message from the film:

“Ultimately Bobby Sands effectively marks the end of the tradition of armed struggle in Ireland. Because what he said is there is really no justification or need to kill people. What you really need to do is dramatise your own suffering.”

One challenge of the film is for mainstream republicans to preach this message to their dissident peers. “You win when you capture the public imagination” and endure rather than inflict suffering.

The film finishes with the jump from Bobby Sands’ death to the emergence of the peace process (and significant US involvement). Just before the closing credits, a caption appears marking Bobby Sands’ birth and death and noting that in total 3532 lives were lost in the conflict between July 1969 and December 2001.

Bobby Sands: 66 Days is neither an apologetic nor a rose-tinted documentary. The film sets events firmly in context but the critique of the hunger strike, the decisions of the UK government and the protest’s long term effect is fairly lenient.

Polling day for this year’s NI Assembly election coincided with the 35th anniversary of Bobby Sands’ death. If anything, Sinn Féin played down references to the hunger striker during the election campaign and didn’t seek to make too much obvious political capital from the anniversary.

If the ambition was to commission a documentary to examine the legend of this republican hero, the dissatisfactory result is a well crafted but very curious blend of comment, re-enactment and voicing of Sands’ words that bounces between facts, analysis and the deteriorating health of the prisoner.

Unionist politicians complaining about the film should save their breath until they’ve seen the completed work and then decide whether they even want to draw attention to the work.

The film is a co-commission for BBC Four Storyville and BBC Northern Ireland made by Fine Point Films and Cyprus Avenue Films (in association with Northern Ireland Screen, Sveriges Television and the Danish Broadcast Corporation with the participation of The Irish Film Board).

Bobby Sands: 66 Days will be screened in the Kennedy Centre Omniplex on Wednesday 3 and Thursday 4 August (tickets £8) as part of Féile an Phobail and will go on general release from 5 August.

Update – Denzil McDaniel reviewed the film for the Impartial Reporter.