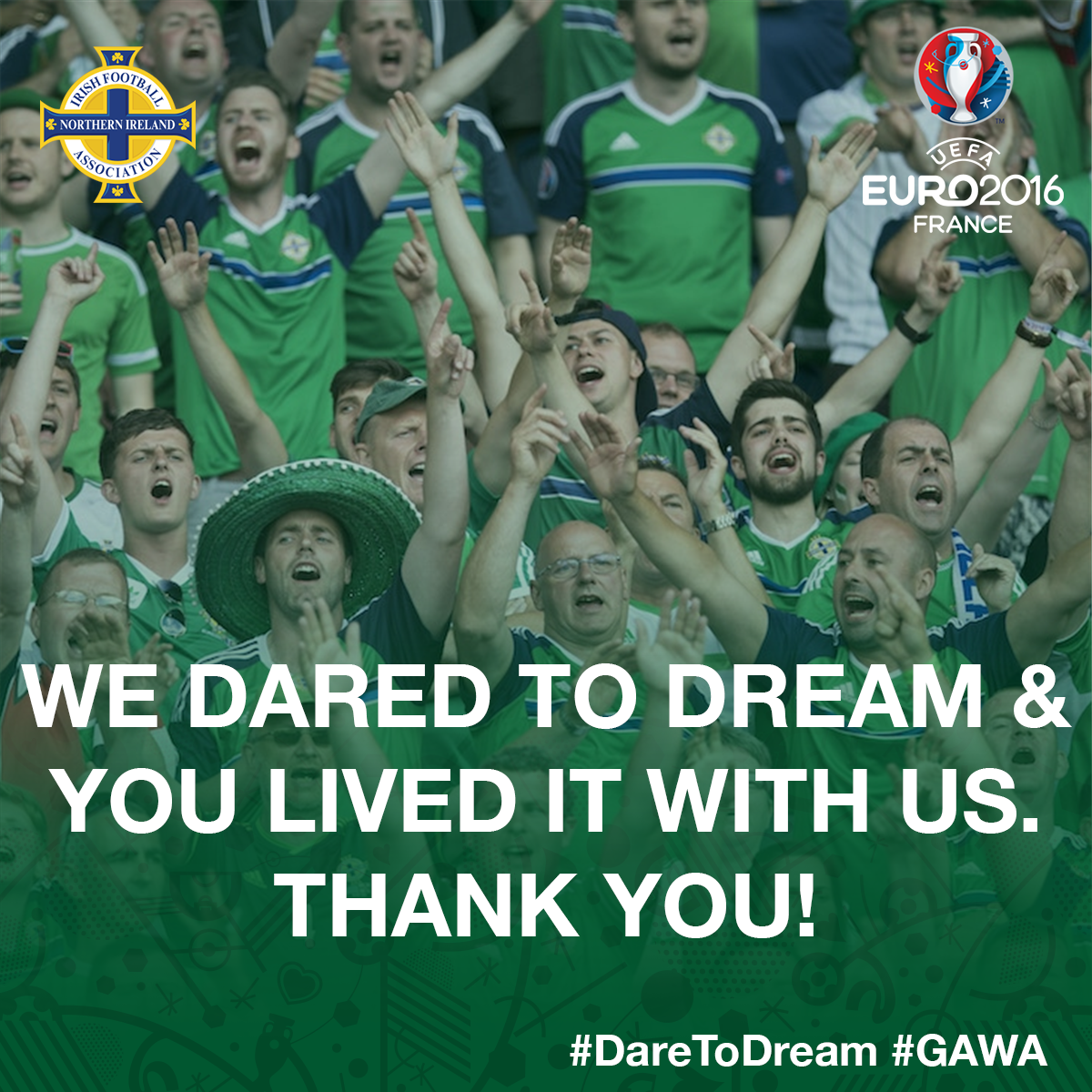 “Don’t let yourself down” is usually the war cry of every Irish Mammy bidding farewell to her off spring as they head away to do something fun and away from the gaze of her watchful eye.  What the Irish Mammy means is, don’t let the family down because you are typifying them and word will get back to her if you’ve misbehaved.  Then you’re in trouble.

Since the Euro’s started; tens of thousands of men, women and children have went off to France to represent us and boy, have they transformed the reputation of the Irish throughout Europe.

Some cynics were delighted as reports came through saying Northern Ireland and Polish fans were fighting after their first match.  But the evidence proved it was they who were attacked and two supporters from the opposing teams even held hands in the ambulance en route to the hospital.

The videos and photographs booming across the world show that although we are a messed up island, we’re a tolerant and respectful nation.  This was clear when the Northern Ireland side lost two supporters in tragic circumstances in Nice and Lyon.  The Republic supporters responded with gestures of condolence and chanting in memory of Darren Rodgers and Archie Rainey.

Nobody could have predicted the past two weeks if they tried.  Both sets of Irish fans have done us all proud.  They’ve been an inspiration to us back home and to other football fans watching on.  Because of them, the French have a new found love for us and those exchanging chairs in Marseilles could have done well to take a leaf from their book.

Over in gay Paree the Northern and Republic fans are getting on like Will Griggs’ house is also on fire but many supporters back home are still feeling the apprehension.  There’s a discomfort of supporting both teams because it just doesn’t sit right with them.  To them, you can support one team or the other but to support both is just impossible.  Unless of course you’re one of these ‘letsgetalongerists’ and prone to blind eyes and deaf ears.

It presents the notion of an all Ireland team.  Will we ever have one, will we ever have an anthem and a flag we can agree on? Or how about we continue having two separate teams and everyone continues to support them without singing sectarian songs or involving themselves in nonsensical triumphalism?

Northern Irish fans have an issue with celebratory rebel songs being sung by Republic fans and they in turn have an issue with ‘The Bouncy’.  We’re told it’s an innocent chant, similar to ‘Boing Boing’ in the stands of West Bromich Albion.  But are we really expected to believe that?  Whilst there has been much rejection to it’s affiliation of the murder of Robert Hamill, no right thinking Republic fan would be seen dead joining in on it and no Northern Ireland fan would want to wail along to the Fields of Athenry, particularly the inserted F**k The Queen bit.

While singing at football matches is by and large part of the craic, it boosts the players morale.  But do the players really need to hear songs about death and gore?  By continuing these practices, supporters are only letting themselves, the players and us down.