If you missed yesterday’s rare Mercury transit across the Sun – the last was in 2006, the next in 2019 – then where were you! [Busy… – Ed]  But even if you were paying attention you’re unlikely to have had as wondrous a view as that of Nasa’s Solar Dynamics Observatory. 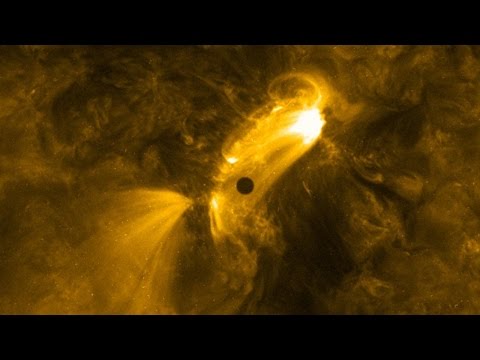 And from the BBC report

Open University’s Prof David Rothery said the celestial event did not present any novel scientific opportunities – but was special nonetheless.

“From this transit, we’re unlikely to learn anything we don’t already know,” he told BBC Inside Science. “But what a wonderful event for showing people Mercury. It’s a hard planet to see.

“Historically, transits were of immense importance.”

In the 1700s, for example, it was observations of Mercury and Venus slipping across the Sun that allowed astronomers, led by Edmund Halley, to pin down the dimensions of the known Solar System.

Prof Rothery is a Mercury expert and a leading scientist on the European Space Agency’sBepiColombo mission to the diminutive planet, which will launch in 2017 or 2018.

Mercury has already been visited by two Nasa probes: Mariner 10 flew past in 1974 and 1975 and Messenger spent four years in orbit until its planned crash landing in 2015.

“[Messenger] told us an awful lot. It really told us we don’t understand Mercury – because there’s a lot of things which just don’t stack up,” Prof Rothery said.

“It’s an airless body, with lots of craters… But there’s been a long history of volcanic activity, fault activity – and the composition, that began to be revealed by Messenger, is weird.

“There’s very little iron at the surface but it must have a ginormous iron core, because it generates a magnetic field – which Venus, Mars and the Moon don’t.”

Current speculation suggests that Mercury experienced a glancing collision with Venus during the early solar system, sloughing off much of its surface in the process – leaving Mercury with a thinner mantle than expected and Venus with a thicker one.

Here’s a post from 2011 which has some details of Messenger’s findings.