On this morning’s SluggerReport I took a glance at Sinn Fein’s Ard Fheis in the context of the Assembly elections. There wasn’t much to say. Dolores Kelly’s attack on them last week may have been easily rebuffed, but the impression was of a victory celebration that never came off.

It’s not just me either. The circumspect Gerry Moriarty noticed it too:

It was a weekend to commemorate the past, celebrate the Dáil successes, prime people for the Assembly elections, plan for further growth and sharpen people should the Fine Gael-Fianna Fáil talks collapse. Surely there would be a buzz.

But for some reason the ardfheis was a listless affair. Perhaps there is a lingering deflation over Sinn Féin not winning more seats in the election. Perhaps Dublin’s Convention Centre was just too palatial and futuristic for a party which normally likes its gatherings and settings to have edge and energy.

Maybe, although that’s a point that Gerry Adams was at pains to deny yesterday in his interview on The Week in Politics… 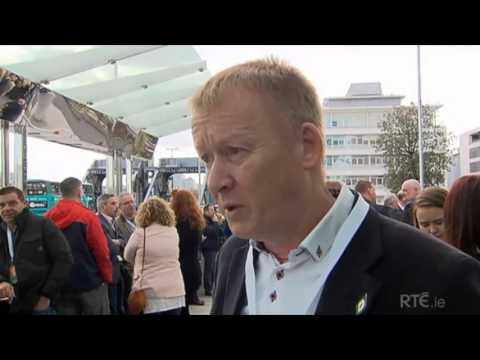 It’s also telling that there was more divergence in the views of delegates than we are accustomed to seeing at Sinn Fein Ard Fheiseanna in the short clip Aine Lawlor played to Gerry half way through the interview. [He wasn’t very happy about it, was he? – Ed]

Moriarty also picked out a few more interesting fragments, not least a belated and extremely backhanded compliment to John Hume and the SDLP:

It was interesting – but perhaps no more than that – that McGuinness in his keynote speech on Friday night three times referred to the need for an “agreed Ireland”, a phrase he repeated when speaking again on Saturday. It’s a term coined by John Hume that one does not hear from Sinn Féiners. Is SF trying to steal SDLP clothes?

As Hume envisaged, the 1998 Belfast Agreement created an “agreed Ireland” in that the majority of the people on both sides of the Border endorsed that accord. They determined for this generation politically what Ireland should be. Still, it’s a long way from a united Ireland as perceived by Sinn Féin and the IRA.

Not sure where they are coming from on that. If they do intend to steal the SDLP’s clothes, it is not before time. But there’s a sense about the party that it’s not now exactly where it expected to be at this stage of the game.

In the context of the horse-trading within the 32nd Dail, their uncharacteristic silence within the public debate perhaps suggests that they expected to be much closer to FF in terms of the final result and therefore much more influential in term of the brokered outcome.

I suspect that that has had a knock-on effect in the Assembly election campaign. In the absence of any clearly increased relevance to power in the Republic the party is struggling for a clear message north of the border too.

In Foyle, Martin McGuinness taking on the SDLP was one of the few messages of the campaign. With dissident councillors behind a single (vehemently pro-Life) candidate that looks unlikely: prompting the mild-mannered Mark Carruthers to suggest it was a vanity project.

Unlike Mairtin’s unsuccessful Westminster campaign last year, the burden for realising such claims falls squarely on Sinn Fein’s #TeamDerry to pull something out of the campaign gloom there.

Following the devolution of policing and justice in 2010, Sinn Fein’s all island focus has shifted to capturing power in Dublin. Dampened expectations of the northern game (the fleg and welfare crises were largely placeholder crises) would be compensated by southern success.

However without that success (and believe me that twenty seat gap between themselves and Fianna Fail is daunting, both electorally and politically), the narrative frame of the ‘inevitably’ myth starts to look much less convincing than it did before.

The problem is that it has been the story for much of the last twenty years of the peace process era. As it fades (and as Sinn Fein reach out for other people’s stories) it opens up space for other narratives to move in, to compete and try to fill the gap.