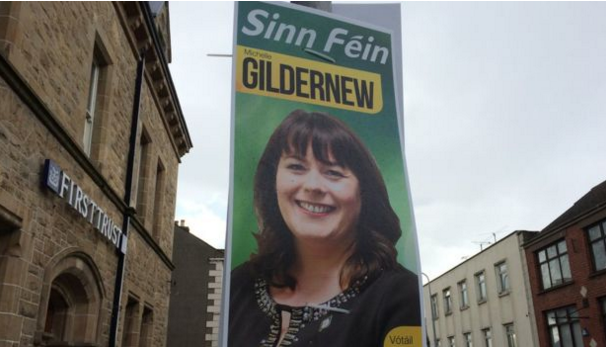 So here’s something to keep an eye on when the votes are counted. Julian Fowler has news of Sinn Fein’s vote management strategy in FST: ie it is to be a total secret between Sinn Fein’s election workers and its voters.

As most of you with longish memories will remember, things in Fermanagh South Tyrone SF did not go according to plan in the selection process. So according to Fowler…

Sinn Féin won three assembly seats in 2011 and this year the party is fielding four candidates after Michelle Gildernew, the former MP and agriculture minister, was selected, then dropped, and then selected again.

Each candidate has divided up the constituency with their own posters that make no mention of their party’s running-mates, but Mrs Gildernew said this was a practical move.

She said: “My name’s massive – I mean, Gildernew – you’ll want a good poster to fit it on!”
She said Sinn Féin does a lot of canvassing and will do its vote management on the doorsteps.

It’s not like any party to be so coy as to how they are going to manage the vote. There is likely to be an interesting story to come out on spun out across two days of the count.

Not least who has the management strategy deliberately lined up to try and get three out of four candidates through what is narrowing race with the SDLP?