Northern Ireland's parliamentary map is about to be redrawn again, with the number of seats cut from 18 to 17. This is likely to result in Belfast being reduced from four seats to three, two of which (on recent form) look like decent prospects for Sinn Féin. The former SDLP leader's seat of South Belfast is unlikely to survive, and the new boundaries of the South Antrim seat held by the UUP's Danny Kinahan (thanks Kevin and Windowlean) are likely to favour the DUP, who he narrowly beat in 2015.

In detail: the coming Assembly election will be the last time that the current 18 constituencies are used for a Northern Ireland-wide election. 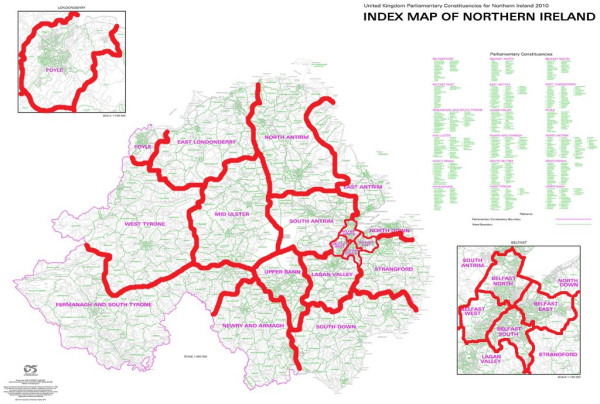 (This map taken from the Boundary Commission's archive site, but I have drawn on it to emphasise the boundaries.)

You may remember that the 2010-2015 Coalition government legislated to reduce the House of Commons from 650 to 600 seats, and that on that basis Northern Ireland was scheduled to lose two of its MPs and to be reduced to 16 seats. The Boundary Commission for Northern Ireland duly produced a new map of 16 constituencies, including reducing Belfast to three seats, but these were never enacted because the Liberal Democrats voted with the opposition to prevent the implementation of the new boundaries (not that it did them much good). 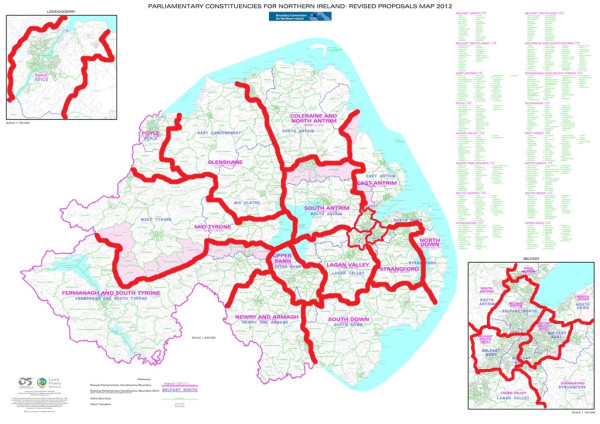 (This map is also from the Boundary Commission archive site; I have drawn on it again to emphasise the then proposed new seats. The areas in light pink on the map are where the Boundary Commission's revised recommendations differed from their provisional recommendations; in each case it was a change that I had proposed, though I proposed other changes that were not accepted.)

Although the implementation of the changes in the last parliament was blocked, the law has not been changed and it still mandates a reduction to 600 seats overall, varying no more than 5% from average size in most cases, and to be revised every five-year Parliament. But this time, it seems that Northern Ireland's electorate has increased while the number of voters in England, Scotland and Wales has decreased, to the point that the Six Counties will now be entitled to 17 MPs out of 600, a loss of only one. I've had a go at working out one set of possible boundaries: 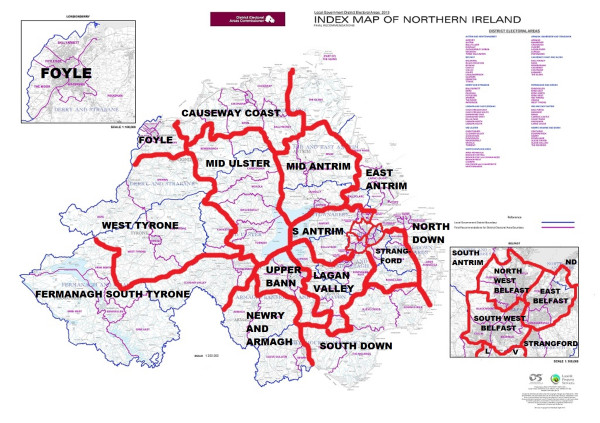 (This map is from the District Electoral Area Commissioner's website, so the thin boundaries mark the DEA boundaries for the 11 new local councils elected in 2014; the thick red lines are my guess at the new constituencies.)

A couple of housekeeping points here. First, the building blocks now are the new electoral wards which are the basis of the 11 new local councils. The 16-seat map last time round was generated on the basis of the old wards which were drawn up in the 1990s for the 26 old councils. There are fewer new wards, and on average they are bigger and have more population. So the construction of constituencies using them is going to lead to some very rough edges (as I think is apparent from my map).

So, to the map. I could see no way of preserving four seats in Belfast. It only narrowly escaped going down to a three-seat city in the mid-1990s, and the numbers since then have got worse. The new Belfast City Council boundaries enclose just under 3/17 of Northern Ireland's voters. To add another seat's worth would mean extending the city constituencies far into the rural fringes, to the point that they would lose the city identity anyway.

Belfast has 60 wards, so if we divide into three that means twenty each. In fact the twenty wards (apart from Belvoir) east of the river Lagan make a nice East Belfast block, if a little under the ideal number. (I have a solution for that, though.) The forty western wards (including Belvoir) do not quite divide as neatly, but I've found a line that I think can work, though it means the boundary between the new North West and South West Belfast constituencies snakes through the streets of the Lower Falls.

Outside Belfast, it struck me that several constituencies are already within the Boundary Commission's set limits for the 17 new constituencies: Foyle, Fermanagh and South Tyrone, South Down, Newry and Armagh, Lagan Valley and North Antrim. Upper Bann is actually above the upper allowed limit already. So I rejigged the boundaries of Foyle, Fermanagh and South Tyrone, South Down, and Newry and Armagh to fit the new DEA and ward boundaries, and got fairly satisfactory results. If the Commission decides to minimise the (major) amendments to existing boundaries that must take place, that would fix those four fairly quickly.

Turning now to County Down, you really have to start by uniting the Ards peninsula with the current North Down constituency. That gives you a seat that is just a little too big – but remember I said that East Belfast is on the small side? Transferring one North Down and Ards ward (Loughview) from North Down to East Belfast fixes both problems. Strangford then also turns out to be fairly easy; if you give it the voters outside the Belfast Council area who are currently in Belfast constituencies, you get a nice block of wards from the former Castlereagh and Ards councils (and three from further south as at present). The boundary between Upper Bann and Lagan Valley unfortunately becomes a bit scraggly, because of the much larger wards; part of the solution may be to split some of the more awkward wards between constituencies.

Let's pause in the East, and look West. If we're allowed to keep both Foyle and Fermanagh and South Tyrone more or less as they are, allowing for the new ward boundaries, then West Tyrone, already undersized, has no option but to annex three wards (Oaklands, Pomeroy and Donaghmore) from Mid Ulster – it looks like a big chunk on the map, but in fact is much less in terms of population. Mid Ulster similarly must annex five wards (Garvagh, Kilrea, Altahullion, Dungiven and Feeny) from East Londonderry, or rather from the new Causeway Coast and Glens council. What's left of East Londonderry now needs to stretch so far into Antrim that a renaming is in order; if you add to it all but one of the new Causeway Coast and Glens council's DEA's, that one being The Glens, you get a decent number of voters. So I propose a new Causeway Coast seat taking in a lot of East Londonderry and some of North Antrim.

We're doing well here; basically all that's left is the rest of County Antrim and the fringes of Lisburn and Lurgan. Last time round, the Boundary Commission's provisional recommendations were to create two east-west seats in County Antrim, one linking Ballymena, Larne and Carrickfergus, and the other linking Antrim town and Newtownabbey. I and others argued that it would be much better to have two north-south seats, one linking Larne, Carrickfergus and Newtownabbey and the other linking Ballymena and Antrim town, and the Boundary Commisson adopted that reasoning (specifically, my recommendations) in its revised proposals. I think the numbers and geography make the north-south seats the obvious option this time. You can construct a convincing Mid Antrim seat from just the five DEAs around Ballymena and Antrim town. The southern borders of East Antrim can be tweaked – at the last moment I put Ballyclare in and took out most of the Three Mile Water DEA, apart from Jordanstown – but the fundamentals are sound; the coast road is a real artery linking the constituency.

South Antrim and Lagan Valley are the losers here, basically being the bits left over that coudn't be fitted anywhere else. I'm not ecstatic about a South Antrim seat that stretches from Newtownabbey around Belfast to the northern fringes of Lisburn, but the numbers elsewhere don't leave much option, and actually it's not so different from the original South Antrim seats created in 1950. Similarly I'm not happy with a Lagan Valley that goes as far south as Rathfriland and whose western boundary dances through the back streets of Lurgan, but no better alternative jumped out at me. Once you have the coastal constituencies sorted out, you have to manage the land in the middle. No doubt those who have access to better equipment (and perhaps more time on their hands) than me will be able to improve on this. As I said above, I think the inherent (and unavoidable) clumsiness of some of the ward boundaries in crucial geographical locations will propel the Boundary Commission to breach them.

Last time round, the Boundary Commission for Scotland was able to provide lots of cool build-your-own-map online tools for budding electoral engineers. I hope that the Boundary Commission for Northern Ireland will be able to follow suit this time, though I appreciate that resources may be scarcer for a territory with a third of Scotland's population, and also that data visualisation for Northern Ireland is complicated by the messy disjunction between old and new wards. But here's hoping.

Who would win these seats? The last election delivered 8 DUP, 4 SF, 3 SDLP, 2 UUP and one independent (Lady Silvia Hermon). The picture is of course complicated by the 2015 electoral pact between Unionist parties in some constituencies. The UUP's narrowly won seat in South Antrim would be partitioned between neighbours with much stronger DUP support, so I think it would fall. That DUP gain, however, is offset by the new situation in three-seat Belfast, where SF look very competitive in both Belfast North West, effectively a gain from the DUP, and Belfast South West, effectively a gain from the SDLP. The new Belfast East would have (just) been DUP on last year's figures, but would be very competitive for the Alliance Party in a good year, especially without a Unionist electoral pact. So I see (on the 2015 figures only) net losses for the UUP and SDLP, and a net gain for SF. (I'm sure that the Ards Peninsula would have voted for Lady Sylvia Hermon if they had a chance.) Future elections will of course have different boundaries, different candidates and a different political environment; the one thing we can be certain of is that nothing is certain.

These seats will also be used for the 2021 Assembly election, where each will elect only 5 MLAs rather than six as at present, for a total of 85. By that time the *next* round of boundary revisions will also be kicking off; and thanks to the blunt arithmetic of the system, the number of seats could quite likely change again to 16 or 18 – and thanks to the 5% limit on variation, further major changes will be necessary to the map, even if the number of seats remains the same. This of course means further disruption of local electoral and political ties. It would be much better if Assembly constituencies were tied to the new local government districts, which are presumably going to be with us for a while, rather than the ephemeral, shifting and secondary Westminster constituencies. But perhaps that's a discussion for another day.

North Down and Ards Council
Loughview ward from Holywood and Clandeboye DEA (3,413)

Newry, Mourne and Down Council
Derryboy, Kilmore and Saintfield wards from Rowallane DEA (8,775)

Causeway Coast and Glens Council
All of The Glens DEA (12,178)

Other permutations are of course possible, particularly in Counties Antrim and Down, but I think the end result will not be too far from what I sketch above.