Are our young people apolitical or de-politicized? What do young people in Belfast think about the city and its future?

These were among the questions raised when ninety sixth form pupils from 25 schools across Belfast gathered Friday at Ulster University to discuss the city’s future and to present their ideas to a ‘panel of listeners.’ The event, ‘Let Them Speak,’ was organised by the 4 Corners Festival.

The young people spoke about issues near and dear to the hearts of those who are about to enter university or the jobs sector: the rising cost of third-level education, the scarcity of jobs in Northern Ireland, and the tough decision about whether they should leave their city to pursue their education and employment.

But they also spoke about the city’s creaking public transport (with many of the students insisting that Belfast needs trams and more buses during the evening and on Sundays), the unfairness of academic selection at an early age, the inefficiencies in the NHS, the significance of cultural and artistic opportunities (many mentioned the importance of Culture Night), Belfast’s ‘bad’ reputation as a violent city, the scourge of suicide, mental health issues, homelessness, Syrian refugees, and a sectarianized political system that doesn’t hold their interest.

The event was featured on the BBC’s evening news, with the students being asked about dealing with the past and ‘big P’ politics. Indeed, the lead in line to the segment acknowledged that while the event was focused on the future, ‘They had plenty to say about the past as well.’ But these topics were relatively absent when students were given the opportunity at the end of the day to identify the issues they most wanted to talk about. 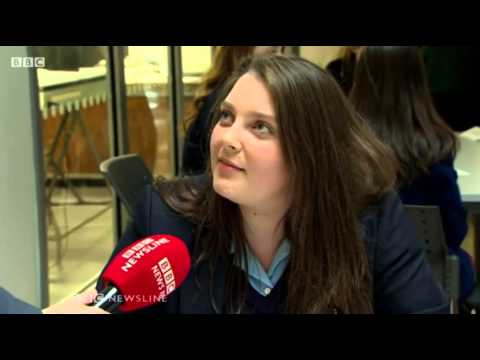 Most of the event was taken up by the pupils breaking into ten small groups to discuss the future. The groups then had four minutes to present their ideas to the ‘panel of listeners.’ The listeners fed back what they had heard and reflected on what they could do to help bring the young people’s perspectives into public debate.

Among the quotes from the student presentations were the following:

‘Youth are not heard in our political system. We need to change the system and remove the petition of concern in Stormont so that we can become a [properly] democratic country.’

‘Selective education is unfair and stigmatizing.’

‘Our political system is outdated and inefficient. That’s why young people are uninterested in politics.’

‘The arts and community events can help heal divisions.’

‘We want integrated schools’ and ‘We can integrate schools through sport, music and arts.’

‘When we go away we shy away from admitting where we’re from. Belfast needs a better reputation.’

Earlier in the day, Maggie Swarbrick, the course director for the Journalism MA at UU and a former BBC reporter, made a short presentation on communicating a youth-led message in the media.

In his remarks, Brewer usefully categorized the young people’s remarks as ‘three kinds of transformation’:

Brewer added, ‘But I am the wrong person to listen to you – I agree with you! … It’s the politicians on the hill who need to listen.’

Wardlow observed that although the young people had raised some issues of conflict transformation (and some of them had been prompted to think about such issues in their BBC interviews), none of them mentioned victims.

Spence noted the young people’s criticism of politicians but pointed out that ‘all of you are political … and everything you said today is political.’ The 23-year-old Spence was elected to office at age 19 and encouraged the students not to give up on politics.

At the start of her presentation, Swarbrick had asked the students how many were interested in politics. Only a handful raised their hands – which seemed to underline the stereotype that young people are not engaged. Many of them confirmed this in their comments about their disillusionment with Northern Ireland’s political parties.

But when she asked them if they were interested in particular issues – university fees, refugees, making sure their sick grannies were seen quickly by doctors – their hands went up. Like Spence, she emphasized that these were political issues and she encouraged them to try and make their perspectives on them heard in the media and to their political representatives.

There was a telling comment from Kirsten Webb of Methodist College in today’s Irish News:

“We have been discussing how we want to see changes in the city and feel we are given being the chance to gain awareness of politics and what’s really going on.

“We are 18 and are able to vote, but we feel we don’t know a lot and politics and schools should be doing more to educate students.”

Fr Martin Magill of Sacred Heart parish, one of the founders of the festival, was inspired to organise the event after the success of a schools’ peace walk in North Belfast before Christmas, in which 400 people took part.

The annual 4 Corners Festival, which bears the tagline ‘bringing Belfast together,’ is organised by a group of Christians with the aim of encouraging people to cross boundaries by attending events in all corners of the city, meeting people they would not otherwise have met. The festival has a theme this year of ‘the art of listening.’ The festival concludes tomorrow.

Disclaimer: I am one of the organizer of the 4 Corners Festival