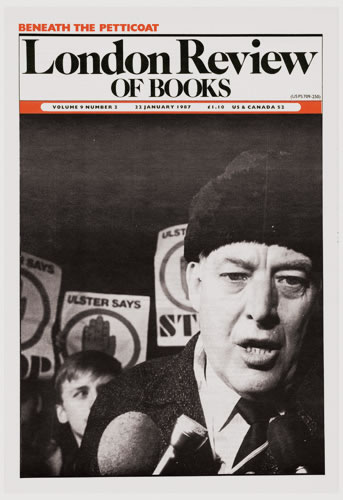 I recently chanced upon this 1987 review by Charles Townshend in the LRB of Steve Bruce’s God Save Ulster: The Religion and Politics of Paisleyism. It now reads as a fascinating period piece. Just the previous month, Paisley had performed the first of his major protests at the European Parliament, heckling Margaret Thatcher. She was congratulating the EEC on its expansion to Spain and Portugal when he stood up, brandishing an ‘Ulster Says No’ poster, and shouted, “I would like to indict you, Mrs Thatcher, as a traitor to the loyalist people of Northern Ireland!”

“Eloignez-vous, Monsieur Paisley”, cried the Parliament’s Chairman, a rather distingué chap from Alsace with the improbably-spelled name of Pflimlin. He had once been Prime Minister of France, indeed the last to hold any real power under the Constitution of the Fourth Republic. He exemplified the sort of conciliating centrist that the colonels of Algiers feared would sell out, and so provoked the last successful coup d’état in Western Europe, lasting only two weeks in office before being ousted in favour of Charles de Gaulle.

It’s worth giving that context, because even in that world, already long vanished – one of European colonial empires and military coups in France – Paisley and his party seemed the last relic of a mercifully departed history. Horrifying even the right, he spurred leftish academics to competitive adjective use, aiming to outbid each other in horror: ‘authoritarian’, ‘fascistoid’, ‘reactionary’, ‘populist’.

Squint past the uniquenesses of Ulster fundamentalism, however, and 28 years after his altercation with M. Pflimin, Paisley seems the forerunner of the modern European populist-right: staunchly nationalist, fairly authoritarian, hostile to the EU, hostile to national minorities especially those seeking “special treatment for their religion”, but populist on the economy. And gaining huge support from people that the left liked to imagine should be voting for them. Political parties of that type are establishing themselves as permanent players in most European countries, and occasionally as powerful ones.

The religious side of the DUP was at least as much about anti-Catholicism as it was about pro-Calvinism. With the exception of the tiny Dutch SGP, the DUP were the last representatives of that sort of Reformation politics that survived the emergence of socialism, two world wars, and the ecumenical movement. It was socialism and, most of all, Soviet Communism, that ended intra-Christian sectarianism as a meaningful political force in most of Europe. If the Reds had ever stormed through the Fulda Gap, Catholic and Protestant religious revanchist pigs alike were going to end up in the Gulag. This was the world that gave birth to the almost painfully ecumenical Christian Democracy of the post-War period. It was a world that Macmillan and Heath in particular, wet Tories and devout High Anglicans, instantly felt at home in.

Something like the DUP, indeed the whole Orange-Unionist political complex, could probably only have survived in Northern Ireland, geographically isolated, culturally thran, and with the luxury of hiding behind somebody else’s nuclear umbrella.

The period after the fall of the Soviet Empire represented less the End of History than a very brief entr’acte, and religious conflict has refused to retreat into the past in the way progressives assumed it would. David Crane, reviewing Gerard Kilroy’s review of Jesuit martyr Edmund Campion for The Spectator last week reminds us there was a time “when English Catholics were considered as dangerous as jihadis”.

The DUP’s closest political parallel in Europe is, ironically the ultra-Catholic Law and Justice party that has just won Poland’s parliamentary elections, with its vitriolic opposition to Muslim refugees being settled in Poland being a major campaign plank. The only Catholic ever to address the DUP’s party conference as a supporter was a Polish immigrant and Law and Justice member. Paisley’s successor as DUP leader has come in for a bit of criticism for his own comments on Muslims, and those were tame compared to other elements of the DUP base.

In most of Europe, however, religion has little salience, and Church hierarchies at least tend to be rather politically correct. Hostility to Islam is proving a powerful political force not so much for the religious as the ardently secularist – especially in France and Belgium, where cuisine is close to being a religion, and Muslim children have started to be stigmatised in schools for not eating pork and on one occasion even had it literally forced down their throats. Even the great high priest of the godless and self-styled ‘Bright’ person has been less than culturally sensitive towards Muslims at times.

Swap ‘Muslim’ for ‘Catholic’ and suddenly it looks like the Paisley wasn’t so much a historical relic but the harbinger of a new type of politics.

After the First World War, Churchill famously complained about the dreary steeples of Fermanagh and Tyrone emerging from the deluge that had redrawn the map of Europe. That redrawing of the map was all about dreary steeples too – in Silesia, and the Burgenland, and bits of the Balkans where a few minarets were mixed in as well. Northern Ireland differed only from these seemingly exotic places in that its place-names were so much more familiar to an English politician.

That backwards Northern Ireland ‘religious’ conflict that seemed so anachronistic back in the 1980s was actually about many of the same questions of ethnicity and religion that consume Europe today: national identity and national minorities; the limits of cultural diversity; the extent of legitimate religious opt-outs from mainstream policies. Is our politics of the past Europe’s politics of the future?