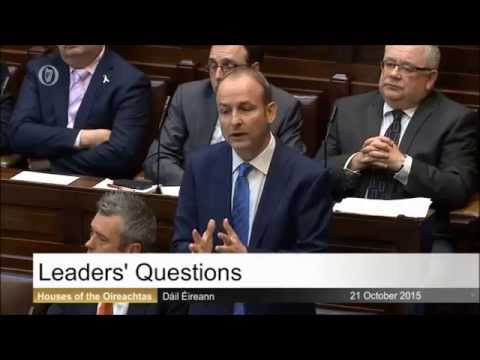 Micheal Martin took his second pot shot of the week at Sinn Fein in Leader’s Questions in Dail Eireann in as many days. But this was a more forensic strike than yesterday‘s more on-the-hoof affair.

He starts with a reference to £28 Million raised by the Criminal Assets Bureau (CAB) from individuals with “connections or associations” with the Provisional IRA, and then from here asks…

Are people absolutely certain Taoiseach that any of the proceeds from the organised crime that’s been going on by alleged individual Provo Republicans is not finding its way into the political project.. I don’t say that lightly… [Noises off from SF benches]

One was an unsuccessful candidate for Sinn Fein. The other was a fund raiser for Sinn Fein. And the third in the court pleaded guilty and described himself as a Republican and Sinn Fein member. So there’s form, is my point. People mightn’t like what I’m saying, but that happened taoiseach, and we cannot turn a blind eye to this.