What a difference a week makes? Last week it was all merry-go-round politics, now there’s some bones on a talks structure that seems to suit both Peter Robinson and Mike Nesbitt. As noted early on on the Slugger Report, Robinson’s tactic was always going to play for time.

One, because of the difficulty of having your electorate witness clearly that the guys you had vouched for as no longer being in the killing game are still at it. And two, because whilst Robinson may not be as popular as the deputy First Minister is generally better at technocratic negotiation.

Spinning out the timeline, allows the emotional impact of the first to fade and to focus resolutely on what is required to keep the institutions up and stable. Stopping the business of Stormont gives him something to play with in those negotiations.

Last night’s Newsline contained a useful briefing on the matter… 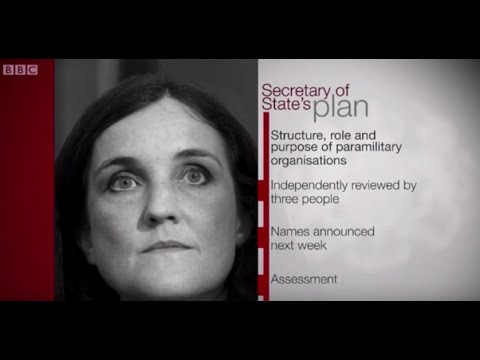 In addition Liam Clarke in the Belfast Telegraph notes:

The review of paramilitary activity is shorter than anticipated; the thought had been of an ongoing process and a clampdown. This was ruled out by the Irish government and the British weren’t hard to persuade of that view.

However, the clampdown may follow. If this body produces a report as bad or worse for the IRA and other paramilitaries than the Chief Constable’s assessment, then it is easy for unionists to order a clampdown. If it concludes that the IRA retrained some weapons as the last monitoring commission did, or that more were imported as is widely believed, then it is hard to believe that there will not be an attempt to get them.

These demands will follow the report. If it is held that IRA structures, or even networks of veterans, are involved in racketeering that will be impossible to ignore. What’s more, the involvement of the NCA as well as MI5 and MI6, means that this will be largely paid for by central government.

As Mr Robinson put it: “She has shown she is prepared to take seriously the issue of paramilitary criminality. That is an important matter and it is good that there is a commitment to providing funds to enhance that.”

Some reporting of paramilitary activities would be better than none at all. And as Michael HC McDowell highlighted in his piece for the Belfast Telegraph, “pulling punches” to preserve the Executive should not be allowed.

It should also be noted that paramilitarism is the problem at hand, not just that of the IRA. Gloves off for one, generally translates as gloves off for all.

The charges of hypocrisy will be hard to field if there is not some concerted attempt to deal with the actual problem rather than seeing it as an internal issue for the parties at Stormont.

For now, though the timetable seems trimmed to get everyone back to work asap. Clarke notes:

The report will also come out at about the time the talks are supposed to finish. As Ms Villiers put it: “This assessment will be published by mid-October and will be available to inform the parties’ discussions and conclusions in the cross-party talks.”

That could cause a row if Sinn Fein or the DUP don’t like the assessment or any action which follows. That could be another crisis, but it is hard for Sinn Fein to walk out in protest at a security assessment.