Michael Bauwens doesn’t just research peer to peer collaborative movements: he believes in them. Delivering a lecture The New Social Economy: Transition to a Post-Carbon World under the umbrella of the QUB School of Law and the Chief Executive’s Club at Queen’s University, he began by giving some examples of the post-capitalist way of producing value that he referred to as commons-based peer production.

The best coffee was exported from Rio to the US and Europe, leaving poorer blends to be bought and drunk locally. Workers were poor and the first to economically suffer whenever there any pressure was exerted on the coffee industry. For some, their answer was not to start a ‘traditional’ fairtrade movement. Instead they opened up the supply chain and introduced open book accounting to make the production more transparent. They shared their recipes for the best blends online. They crowdfunding within their communities, offering free high quality coffee for three years in exchange for investment in the coffee business. And they ‘hacked’ the coffee machines to accept their local capsules rather than just those of the larger brands. 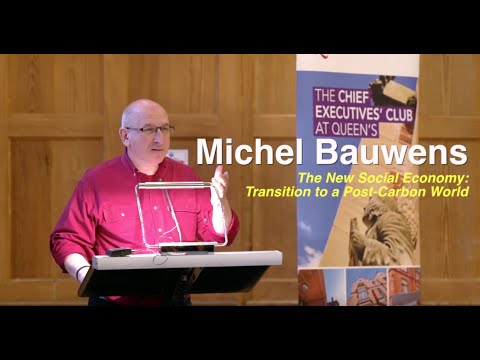 Michael contrasted traditional NGOs with foundations. A classic NGO reckons there’s a problem and competes for scarce resources (grants, subsidies, fundraising) to direct at the problem. A foundation – like the Wikimedia Foundation, Linux Foundation or Arduino – realise that there is a problem and an abundance of people [across the world] who want to solve the problem. So they create and protect a platform that empowers people to come together to work on the problem, but stop short of directing the strategy.

So a ‘commons’ – an entrepreneurial coalition – can be created, surrounded by a self-organising community of unpaid and paid (perhaps a company’s way of getting access to the produce of a greater resource pool) contributors working as peers, with a foundation looking over its shoulder.

Away from software and hardware industries, you might be more familiar with Uber or AirBnB. Uber doesn’t make cars, run a switchboard or drive taxis. AirBnB don’t own property or clean bedrooms. But, arguably to a greater or lesser extent, they facilitate a community of peers who work together to provide services.

In May, Bologne celebrated a year of operating under the Bologna Regulation for the Care and Regeneration of the Urban Commons, with social entrepreneur Neal Gorenflo describes as an “institutional innovation that enables Bologna to operate as a collaborative commons”. In the first twelve months “more than 100 citizen-led projects have signed ‘collaboration pacts’ with the city under the regulation to contribute urban improvements with 100 more in the pipeline”. Thirty of the projects signed up this year have already delivered. Neighbours are empowered to reclaim their autonomy and invest to improve their neighbourhoods. Michael gently suggested that Belfast was behind the curve.

Commons-based systems can operate at political, social as well as commercial or technological spheres. Increasing numbers of ‘precarious’ knowledge workers are opting out of corporate life and finding other ways of contributing value to society, which Michael Bauwers would refer to as ‘commoning’.

Having spent this week in Belfast, Michael has stumbled upon – or been introduced to – numerous groups of peers who are no longer as trusting of institutions (including political leaders and structures) and are instead investing in a collaborative economy that uses social network [not necessarily social networks] and shared commons.

There are opportunities alongside new community planning processes introduced as part of Reform of Public Administration for communities to become more involved and not just petition for change but get permission to work together to bring about change … with the blessing of – or worst case, despite – the local council.

Perhaps one example are the residents in the Holy Lands whose houses back onto Wildflower Alley. The regeneration of the neglected alleyway came about because of community spirit, and while started by a couple of ringleaders, the efforts were sustained by neighbours painting each other’s fences, sharing plants, working together for the common good … and eventually became a poster child for the council.

There is much talk about the need for structures like the long-forgotten Civic Forum to provide an alternative to the leadership that many feel is lacking from political parties in the Executive and Assembly. Michael Bauwens’ analysis would imply that it should not be beyond the capacity of citizens to get on and create a commons. And then perhaps the politicians will beg to pick up and reuse the ideas and output.

Embedded QUB School of Law’s recording which has better sound quality than my video.