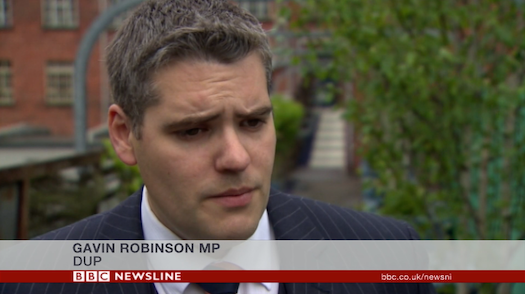 … I don’t think we can leave it for another year. I think there is the need for us to get a collective group together and to make sure we manage all of the bonfires in a much better way.

Local councils – to which we elect politicians – run bonfire management schemes. However, not all bonfire builders are willing to adhere to the rules in order to access the funding. (Though these schemes are credited with a general reduction in Fire Service callouts in recent years.)

While it’s hard to ignore the lack of permission from some land owners, the somewhat dubious supply chain of pallets, and the opportunity some businesses take to dump materials (such as tyres and even wallpaper rolls according to one Talkback contributor) … many bonfires and beacons are safe, family-friendly, don’t damage roads, pavements or play parks and avoid burning tyres, flags, political posters or effigies. [Ed – or sex toys – gallery image 4!]

Yet as Gavin Robinson acknowledged, others ignore common sense advice, even from local residents. It doesn’t take a particularly bright spark to know that a Bonfire Coalition could not be formed to represent all bonfire committees and builders.

If elected political representatives find that their power of persuasion is weak once bonfires are well under construction and out of control, perhaps the only logical step is for them to avoid this late intervention and instead roll their sleeves up months earlier and become involved with the building of bonfires in their council areas and constituencies?

Councils, DRD, DSD, the Police, the Fire Service: none of these organisations want to take action that puts their employees at risk.

Alternatively councillors, MLAs and MPs could state clearly at Easter when bonfire material collection begins that they will support and accompany statutory agencies taking action later in the summer to move unsafe bonfires and keep residents and property safe.

But it doesn’t take a particularly bright spark to know that these ideas are no more realistic than Gavin’s Bonfire Coalition … so if you’ve a better way of applying pyrotechnic common sense, post a comment!