…and out of control…  The BBC reports on the Russian unmanned cargo ship delivering supplies to the International Space Station that mission control has lost contact with and is now in a uncontrolled spin.

Or, as RTÉ says, it’s ‘plunging back to Earth’.

Here’s the view from a camera on-board the spacecraft. 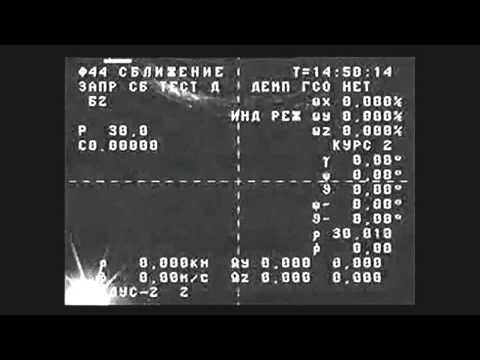 From the BBC report

The Russian news agency Tass reports that Progress M-27M is now orbiting in an uncontrolled spin.

Scientists may try again to control it, but it is now likely to break up on re-entering Earth’s atmosphere.

A spokesman for mission control told Russia’s Interfax news agency the craft carried on to a higher orbit after contact was lost, meaning it is now unable to dock with the International Space Station (ISS).

The spokesman said: “The possibility of the craft linking up with the ISS is now not worth it. The main thing now is to ensure its controlled and safe de-orbiting.”

Two astronauts spending a year on the ISS, Scott Kelly and Mikhail Kornienko, told the Associated Press news agency that flight controllers had given up hope of controlling Progress again.

Mr Kelly told AP he expected the capsule to burn up in the atmosphere, but said he did not know when that would happen.

The Guardian’s Jamie Grierson is doing sterling work live-blogging events, but is beginning to wonder how long he’ll be at his desk…

So there’s a distinct possibility the Progress 59 spacecraft could be orbiting Earth for more than a week.

I’m starting to wonder if I’m on course to set a new live-blogging record.

Send coffee and a sleeping bag to Guardian HQ.

Thomas Reiter, director of human spaceflight and operations at the European Space Agency, just told me that if the Russians cannot regain control over the spacecraft, it could be up there for a week and a half max.

Normally, these vessels are jettisoned on controlled re-entry paths over the south Pacific, so that any fragments that survive burnup land in the ocean. This would be an uncontrolled re-entry, so some pieces could make it to land.

But the danger to people is very slim. More than two-thirds of Earth are covered in water and only about 3% of the land is occupied by urban areas.