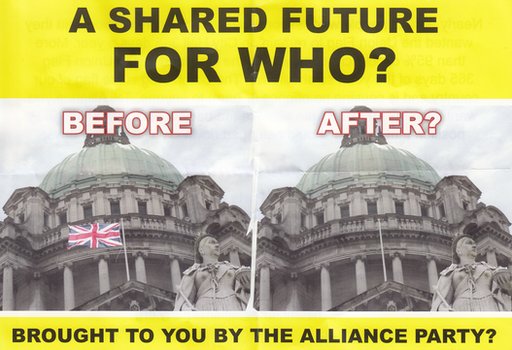 Today on BBC Talkback, DUP councillor Lee Reynolds finally publicly confirmed that the DUP and UUP had paid for and distributed leaflets described by authors of the QUB report as having a ‘catalytic effect’ in the run-up to the city hall vote,” The report states “It was this, more than anything else, which inflamed the mood at that point”

The release of the joint statement also provided the catalyst for Basil McCrea‘s departure from the UUP and before that John McCallister.

In December 2012 McCrea described a joint decision by the two main unionist parties to take the flag dispute to Stormont’s Assembly Commission as a “stupid idea” and said on BBC Talkback:

Speaking to Slugger tonight Mr. McCrea told us he been assured by the Executive of the UUP that a report explaining the production of the the joint leaflet would be commissioned.

No such report has ever been made public.

The full QUB report can be read and downloaded here: http://www.qub.ac.uk/research-centres/isctsj/News/Title,481122,en.html

Read in depth analysis of the report here: http://sluggerotoole.com/2014/12/03/the-flag-dispute-anatomy-of-a-protest-published-by-queens/