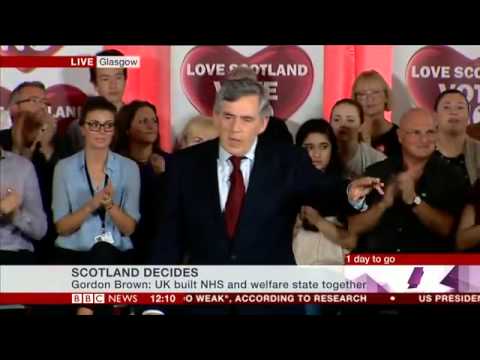 So, again in case you haven’t seen this, here’s Gordon Brown putting a bit of last minute umph into the No campaign. It begs two thoughts. One, where on earth where they hiding him? This Gordon Brown should arguably have been striding like a bear round pumping up the No troops.

And two, note the clarity of the messaging? There has been ZERO messaging from the No camp (other than “Big boys came..”)

So, what’s that all about? Brown looked like the first grown up to show on the No side. The three wee boys supplicating against the man on the Scottish mountain has been for woeful viewing.

Brown’s last minute appearance reminds in the most painful and graphic terms just what they lost when they swapped him for Ed Miliband. A bit of a double whammy if as the polls indicate some 40% of their vote has leached across to Yes.

After such a divisive debate, you’d imagine that even if the vote is to keep Scotland’s long association with England, Scottish Labour is a broken vessel needing some long overdue repairs in a dry dock.

Where do they get a Scottish leader, if not in quite the mould of Brown, then someone at least capable of playing in the same league as Salmond?

Whatever happens today it’s been extraordinary to see some commentators who could not see the back of Brown quick enough, so abjectly grateful this morning that someone had the adult gumption to finally speak up for their 300 year union.