So here’s another Elephant trap from last week. This one appears overtly to have far less public valence than the George Robertson faux pas. But then again Steve McQueen’s not quite jumped the fence and into Swiss freedom yet!

In part that’s because the Yes campaign has signally failed to make policy an issue.

So, to the trap. It’s the moment in last weeks debate when the deployment of actress Elaine C Smith a celebrity ringer for Yes was put on the spot to name one policy that would make the working class better off… 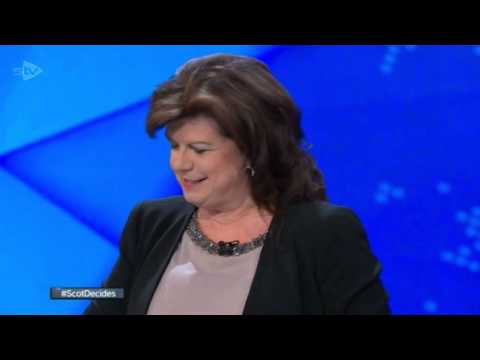 Her plea for the presenter to get her opponent Labour MSP Kexia Dugdale to answer first opens up one of the so far under exploited weakness of the Yes campaign: the poor sense of detail of the material effects of the decision to go independent.

In Smith’s case, she’s not a politician and not used to covering it as a professional might. Put in to play to the hearts of the audience (and perhaps try to narrow that stubborn gender gap), she inadvertently reminds the audience of a key weakness.

Political scientists in America have found that celebrity endorsements fail because the pop-stars and celebrities do not share the plight of ordinary folks. In the eyes of the voters, Bowie, Bjorn Ulvaeus and Meat Loaf are simply wealthy celebrities who have no need to fret about the mortgage, fuel prices and such like.

Yeah, well Elaine is heaven sent for the heart message. But this episode also betrays a weakness: ie that Yes is only a constitutional promise of independence, it comes with very little in the way of political content.

Set aside the likely effect on Sterling (we already have indications that markets are preparing to abandon the Pound), the tough fiscal challenges facing a newly independent Scotland cost of set up, potentially higher cost of borrowing and fiscal restructuring of the current Scottish fiscal deficit.

None of these things are insurmountable. Severe weather in the short term is no block to long term prosperity. But in the long haul of negotiations, as there is likely to be precious little mind, space or resources for social policy.

…it does not follow that Scottish statehood is likely to improve matters. On the contrary. The ease with which its advocates deny the risks that confront them suggests a dangerous combination of chauvinism with naivety.

In other words, if you want social justice in a newly independent Scotland, you may have to pester a defeated former Unionist for some practical answers as to what to do about it…

If you spot an elephant trap for Yes or No, ping us an email to [email protected]?