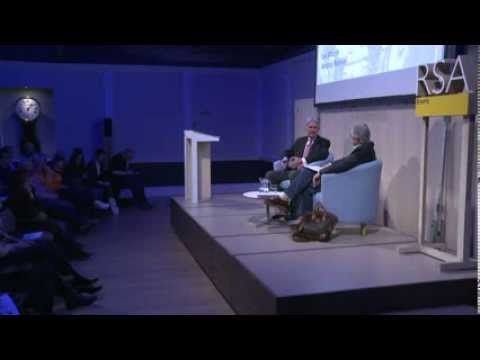 Today’s Friday thread is a talk delivered yesterday at the RSA in London by Ian Morris, author of a new book which posits the controversial idea that, over time, war is actually good for us, not necessarily as individuals but as societies.

Violence is an evolved adaptation. Pretty much every species has its own way of using violence. Each has evolved an equilibrium point in the use of violence.

What happens within each species is that you are too violent if you use a lot more violence than the equilibrium point, you will tend to drop out or your genes will drop out of the pool because if you fight constantly you’re going to get injured or killed fairly quickly are less likely to pass your genes on to the next generation.

If you’re not violent enough by the standards of the species also you’re going to be disadvantaged in passing your genes on to the next generation you going to  lose out in the race for food or mates or whatever it might be.

So each species evolves toward an average amount violence that uses average forms of using violence and we humans we are animals too. We evolved toward an equilibrium point which is just ten to twenty percent rate to violent death BC the stone age societies.

There’s nothing in nature quite like the human brain.   For all we know this is the most complex evolved object in the entire universe. The human brain basically changes everything.

Other animals pretty much can’t change their behaviour in response to payoffs in this sort of way. That’s why the rates of violent death among humans has fallen by ninety percent over the last ten thousand years.

Even though we are basically the same animals we were 10,000 years ago, our behavior has changed dramatically assessing no other animals do that.

It’s changed I suggest in the book because these larger societies that we started creating produce stronger governments that change the payoffs from violence.

Now, I think there’s a lot in here to push back on, not least what happens to human agency when these stronger governments begin to manipulate the destinies of individual human lives. I’m not offering it as a proforma for our situation in Northern Ireland.

But it’s worth considering that after one of the most protracted periods of political violence in the last four hundred years of the island’s history, we may finally be in a position to understand the limits of violence as a political end, in and of itself.