Many are upset at the NRA’s focus on the president’s daughters. Former Bush speech writer David Frum isn’t holding back:

As the makers of the NRA ad should know, and probably do know, the First Family has come under years of racially coded attack for their “uppityism,” as Rush Limbaugh phrased it. This latest attack ad looks to many like only one more attempt to enflame an ancient American wound.

I agree. But surely the larger point here is the disingenuousness of those who scream “not from my cold dead hands” on gun rights while meekly acquiescing and even actively cheerleading the abandonment of a whole host of other Constitutional rights.

If Second Amendment gun rights advocates are so concerned about the prospect of a tyrannical, intrusive and unaccountable state rising, then why the hell are they so intent on building precisely such a state?

Let’s take the two chief but by no means isolates examples. The War on Drugs and the War on Terror.

America’s Drug War is a case study in actually existing Big Government dangers; the very theoretical threats to liberty gun rights advocates claim to fear. Aside from the millions of young American men and women who have been imprisoned for non-violent drug offenses, the brutal police raids, the stillborn careers shattered by resumes fouled by prison time, the sheer scale of this authoritarian state initiative is so vast that it has given rise to a whole economic sub-sector devoted to private prison growth.

“Six million people are under correctional supervision in the U.S.—more than were in Stalin’s gulags.”

You’re terrified about the possibility of a government emerging with scant regard for citizens’ rights? Bad news bro: When Presidential legal advisor John Yoo is publicly defending the President’s legal authority to order the crushing of a child’s testicles as a part of an attempt to ‘break’ not the child but the child’s father – well, we’re well past questions about potential tyranny. 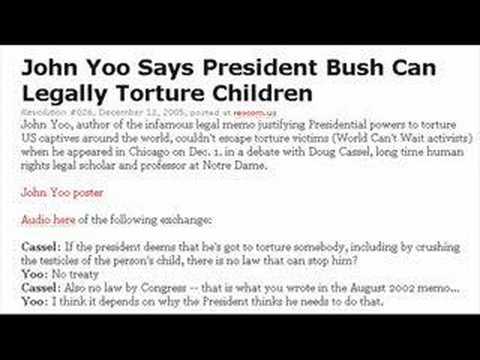 It’s one thing to argue that gun control legislation is a nonstarter, despite tens of thousands of deaths by gunshot per year, because the safeguards articulated in the Bill of Rights are sacrosanct. I can respect that… but not from people who simultaneously insist that 3,000 dead in a terrorist attack justifies departing from the plain text of the Fourth, Fifth, Sixth and Eighth amendments, and giving the president de-facto power to declare war without Congressional approval.

Progressives laugh and scoff at Second Amendment fanatics who claim that government left unchecked has the potential to exert absolute authority. This is the wrong approach. Fears of Big Government riding roughshod over the US Constitution are, if anything, massively under-stated. A response to the extremities characterizing the current US Government’s executive over-reach is merited but it’s a response that should be anchored in protecting the First Amendment, not in a narrow fixation on the Second.