Okay, leaders Questions did not go to plan today. The subject under discussion was Welfare Reform. The Taoiseach had just taken a bit of roasting at the hands of Micheal Martin (over a planned 20% cut in the respite care grant).

Then it was Gerry’s turn with the Taoiseach (who was probably already in very bad twist). It all starts here, when Kenny gives him what sounds like an almost playful dunt over the Northern Bank robbery, in response to an earlier comment from Adams about the wealth of those sitting on the front bench.

…it ill-behoves you to come in here and talk about the raw emotion of women in particular in view of some of the incidents that have occured in your lifetime with which you have been associated.. but not just raw emotions but tragic consequences have resulted.

Then it gets serious… As soon as Kenny stops speaking, Deputy Adams rather than letting it lie, brings up the Taoiseach’s remarks about his own past

Kenny then turns to answer his question, and then at the end, he says…

I would love to hear you speak the truth about some elements of your past” Mr. Kenny told Mr. Adams. You might some day tell the truth about the tragedy and the remorse and about the compassion that should have been shown for Jean McConville. Maybe you might do that, Deputy Adams.

Ceann Comhairle Sean Barrett pleads through an almost constantly haranguing from the President of Sinn Fein for a good two and a half minutes. Barrett then, reluctantly it seems, suspended the whole sitting for five minutes.

You can get the whole of the session here… 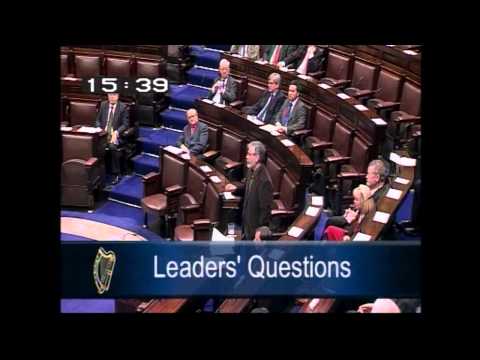