The Northern Ireland First and deputy First Minsters recently announced the second round of funding, £1.5million, available from the Executive and Atlantic Philanthropies’ ‘Contested Spaces’ Programme, although I’m still not entirely clear where the other £2.5million went…

The announcement, in the absence of a “Cohesion, Sharing and Integration” strategy, rebranded, and “watered down” to the “lowest commmon denominator“, or otherwise, coincides with the reveal of the masterplan for the regeneration of the Girdwood Park former military base.  [And the Crumlin Road Gaol ? – Ed]  Separate masterplan…

Housing will also be developed on the site, for a broad range of people in the context of a shared site. This will contribute along with other developments to addressing housing need and broader regeneration issues in North Belfast.

We don’t really have shared housing sites in north Belfast.

And from the now NI Culture Minister, Sinn Féin’s Carál Ní Chuilín, in the same 2008 report

Those communities aren’t ready to live together yet.

But as BBC NI political editor, Mark Devenport, points out

So what has changed?

I did my best to get an answer out of Nelson McCausland on Monday night’s BBC Newsline, but viewers will have noted that during a brief interview the minister appeared keener to talk about the planned sports facilities rather than to give further details about the housing compromise.

Significantly the new master-plan shows two separate residential zones – one near the Antrim Road which appears likely to attract nationalist residents, another on Clifton Park Avenue, just outside the Girdwood perimeter, which seems more oriented towards unionists. [added emphasis]

On Monday morning, the SDLP’s Alban Maginness posed alongside other local elected representatives at the site with a giant copy of the new master-plan (a photographer captured the event but broadcasters weren’t invited).

However, Mr Maginness later issued a statement in which he qualified his welcome for the breakthrough, talking about the Girdwood glass being both half full and half empty.

“The housing need in north Belfast requires and acquires a significant element of the Girdwood site to go to social housing” Mr Maginness argued.

“The scale of need is not fully recognised in the announcement and some may argue that the principle of housing based on need has not prevailed when it comes to the Girdwood site.”

So the devil may yet prove to be in the detail – how many houses will be built, and will the provision of accommodation match the need demonstrated by those on the waiting list?

As you can see from the masterplan on the NI Executive’s flickr feed, the proposed residential zones are at opposite ends of the site.  [Build another peace wall! – Ed] 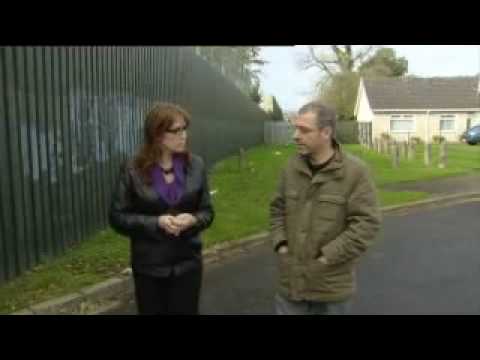