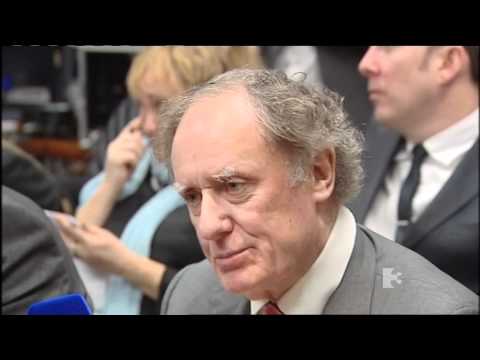 Extract from Vincent Browne putting the ECB under some pressure. He asks a simple question to a European central banker who has just finished praising the Irish public’s understanding of the economic crisis. Browne pays him the compliment of asking him one of the more awkward questions in the current playbook: ie, why are Irish taxpayers paying off the debt of a bank (Anglo Irish) that is effectively bust?

Klaus Masuch answers it by saying (but not saying) that it was a job lot to bail out the whole of the Irish financial sector. He answers as though the ECB were the lender of last resort for the European banks, but most surely not to the constituent nations of the Eurozone.

It’s also worth reading Colm McCarthy, in yesterday’s Sunday Independent, who, no lily-livered fiscal liberal suggests the ECB is simply not thinking through the consequences of its policing of Ireland’s eye-wateringly tight debt repayment schedule:

The European Central Bank continues to insist that reimbursements in full be made to those who hold bonds issued by Anglo Irish — bust many times over, closed down and under garda investigation — at the expense of an insolvent State. This will in time come to be seen as one of the strangest episodes in the history of central banking.

The ECB has chosen to persist in regarding the insolvency of an EU member state as a minor sacrifice in the great cause of pretending that Europe does not have a banking crisis. The policy is now entirely pointless and failing to achieve its unexplained but presumed objective, continued access to the bond market for European banks.

Nobody at the ECB appears to understand that this policy is increasingly seen as an act of straightforward hostility towards this country, notwithstanding Ireland’s errors and failings in the stewardship of its banking system.

The policy does not even enjoy the justification of succeeding on its own terms, since hardly any European banks can any longer sell bonds into a market thoroughly disenchanted with the myriad failures of the European response to the crisis.

There are three eurozone member states in bailout programmes. The programme agreed for Greece in May 2010 has failed and Portugal is unlikely to exit its programme on schedule. Would the ECB like to have even one success?