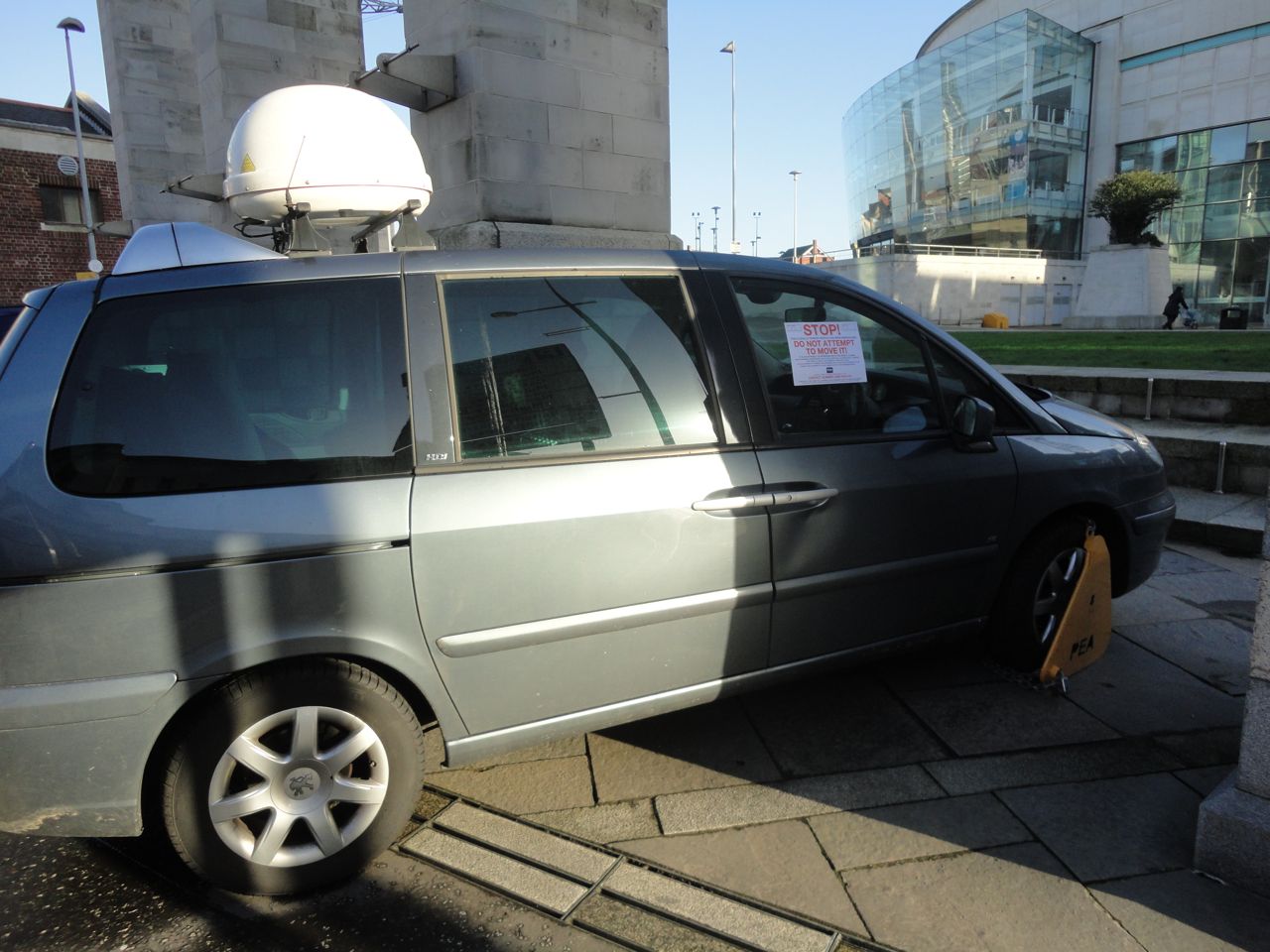 Traditionally, broadcast crews covering cases in Belfast courts park their vehicles on the other side of the road underneath the banners advertising the next big event in the Waterfront Hall. Unlike the nearby car parks, their chosen parking spot is free and has line of sight across to the court railings, allowing journalists to ‘go live’ on the lunchtime news with wireless cameras and mics.

Any other car or van parked around Lanyon Place would be quickly targeted by the private clamping firm employed by the Lanyon Place Management Company. Until today, when three media vehicles – none of which seemed to be liveried – were clamped!

Affected journalists were cross. Very cross. Though probably not as cross as they would have been if their vehicles had been lifted up onto the back of a towtruck!

PEA later arrived to unclamp the cars. However, it’s not clear whether money changed hands, or whether the media will continue to be a permitted exception to the byelaws in that area. Update – from Mark Simpson’s late evening tweet, it looks like the fines had to be paid. Getting that through expenses will be fun.

Inside the courts, two men accused of the murder Constable Stephen Carroll were standing trial. Brendan McConville (a former Sinn Fein councillor) and John Paul Wootton deny the charges. Wooton’s mother – Sharon Wootton – is also in court, accused of perverting the course of justice in relation to the subsequent police investigation of the shooting. She denies this charge.

In the Guardian, Henry McDonald reports:

Turning to Wootton’s alleged involvement, the barrister told the court that an army surveillance device had been fitted to the defendant’s car in the period prior to the shooting. He said data obtained from the tracker placed his car about 240 metres from Carroll’s silver Skoda police car when he was shot.

The device detected the gold-coloured Saxo driving off 10 minutes after the fatal bullet was fired, the lawyer added. He said while the information had been downloaded from the tracker, the raw data on the device’s hard drive had since been inadvertently deleted.

Details of the tracker and how its data about the movements of the car in the three hours after the attack came to be removed and later restored will no doubt feature in cross-examination and evidence in the weeks to come.

Lastly I’d note that unlike some recent cases in Northern Ireland – and unlike the new policy in England – journalists don’t have permission to tweet from this court room – “by order of Lord Chief Justice office“.