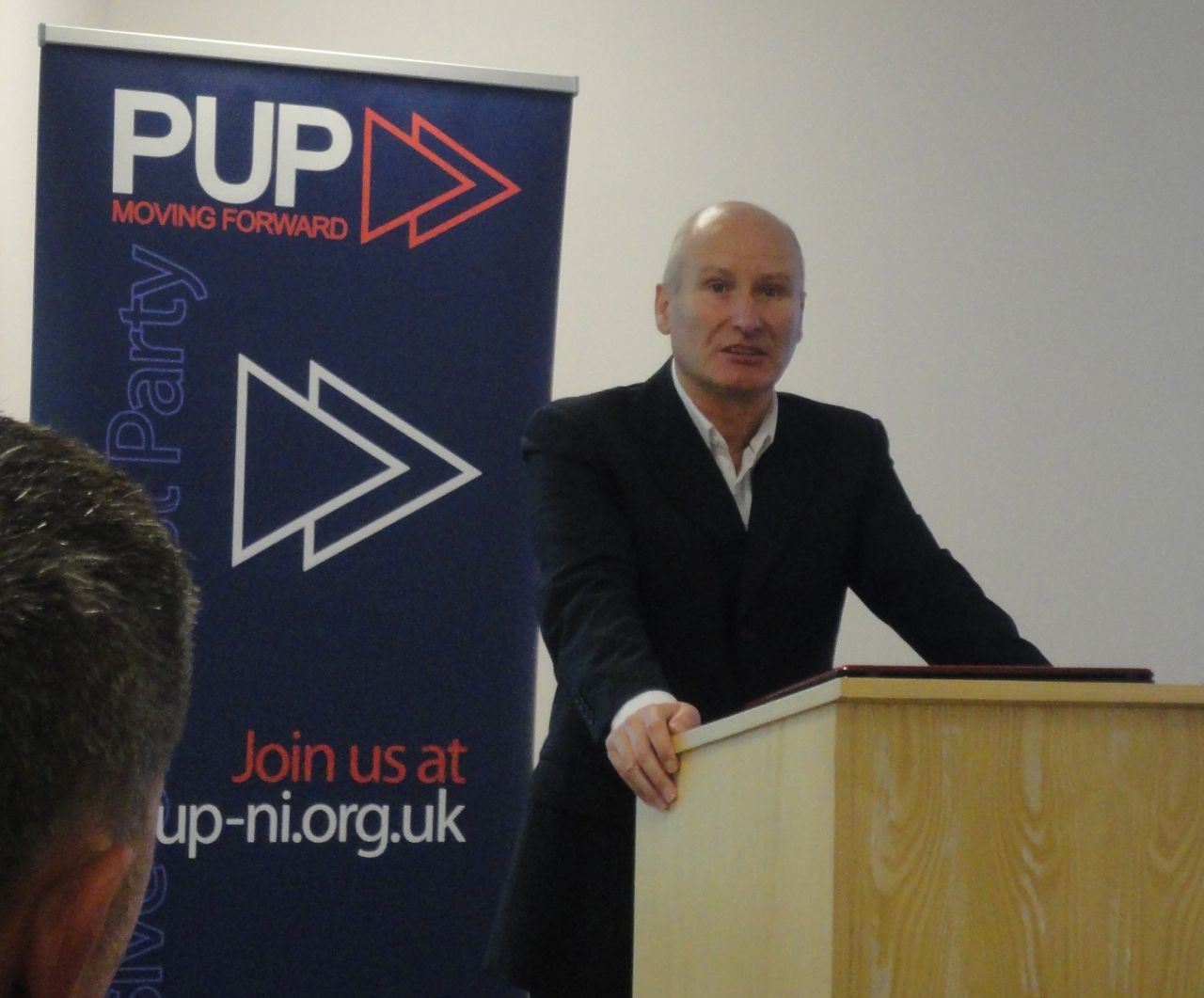 The Progressive Unionist Party’s annual conference was held on Saturday morning in the large conference room in City East this morning. About 60 people attended. This year exhibitors hadn’t been invited, curtailing a conference revenue stream, but also keeping the focus on party business.

I’ve a theory that most party conferences are identifiable from a photo of the back of delegates’ heads. This morning’s conference was dominated by older men, though some younger people and some women were present.

As mentioned in the preview post, the PUP are definitely going through a period of reflection. Party chair Brian Lacey started by giving an overview of the last year, changes of leadership, explained why Brian Ervine wasn’t present (he’s in hospital and they sent him warm wishes), paid tribute to the interim and outgoing leader Hugh Smyth, and gave noticed that nominations for a new leader had to be with him by the end of the mid-morning coffee break.

Hugh Smyth spoke well, the first of many speakers who echoed the statement that there was still a place for the PUP in the Northern Ireland political scene. While it would never be a major party, it still had a role to play. He suggested that there wouldn’t be an Assembly up at Stormont if it hadn’t been for the PUP. While reckoning that if Jim Allister had his way “he’d be taking us back to 1690”, Smyth recognised the impact that the single TUV MLA has made. He made a comparison with the level of opposition put up by the PUP’s former MLA (Dawn Purvis).

Smyth suggested that the PUP’s lack of electoral success hadn’t been helped by the Assembly elections running on the same day a the local government poll and looked forward to the next council elections which would be held on their own.

John Kyle spoke next, again asking “is there a need for the PUP?” and “what makes the PUP different?”

Three or four times during his speech, Kyle quoted from Billy Mitchell’s Principles of Loyalism, reminding the delegates that social justice policies had been at the core of the PUP’s thinking for a very long time, and yet these policies were rarely acknowledged by the media.

Referring to the aftermath of this week’s racist attack in Antrim, Kyle congratulated his party colleague Ken Wilkinson for “speaking out clearly and unambiguously about drugs, racketeering, …” and stated that “the PUP is willing to work with anyone who has common concerns with us”.

Prof Tony Novosel (history lecturer at the University of Pittsburgh) was well known to many in the room and posed the question “what would NI be like if the PUP and working class engagement hadn’t happened?”

Novosel focussed on the ‘friend’ aspect of being a ‘critical friend’, offering little challenge to the delegates. Looking back at the party’s history, he quoted Secretary of State Jim Prior who said that the only constructive suggestions from NI parties came from the Workers Party and PUP.

Much of Novosel’s research and analysis of loyalism will be collated and published next year in a book. After twenty minutes, he drew breath for questions.

During the Q&A, Hugh Smyth reflected on the danger of excluding people in their wider community with dissident opinion, pointing to what’s happening with those groups Sinn Fein left behind. Smyth also suggested that rather than always criticising the DUP and UUP, the PUP should highlight when other parties make positive contributions in working class areas.

Leadership nominations closed at the end of the coffee break.

William Mitchell from ACT was up next. He started by referring to the frequent confusion between him and Billy Mitchell. Both were imprisoned at the same time in Long Kesh and on one occasion William went down for a visit only for the lady to complain that he wasn’t her husband Billy!

In his presentation “The ACT Movement: Emerging from the Shadows” William Mitchell explained what the Action for Community Transformation programme was doing in UVF and Red Hand Commando areas. ACT is basically the civilianisation programme that seeks to create a stable transition from past ways into positive community involvement.

The first phase was about capacity building and identified 191 leaders who were put through a set of training modules that looked at aspects of individual, group, community and society and introduced a series of approaches (self reflection, socio-metrics, action planning, inter-relations) backed up with a series of theoretical concepts (Johari window, Iceberg principle, Conditioning, Restorative practices).

Phase 2 set up local area action groups that bring people together to look at specific issues such as youth development, parades and interfaces, etc.

ACT has got this far with no core funding, instead relying on volunteers over the last three years. (A small amount of funding has been promised from an English trust, and it sounded like Belfast City Council had contributed to an aspect of one ACT training module.)

The final phase is small ‘p’ political, encouraging the 1440 people now signed up for ACT to take part in representative and collaborative politics within their communities. There’s a layer of governance for accountability and to identify best practice worth sharing across the seven or eight zones.

The powerpoint diagrams that illustrated Mitchell’s talks including scary organisational charts and I suspect several forests-worth of flip charts have been destroyed as ACT has come to fruition.

The exciting thing about ACT is that it has reached a stage were it has something positive to talk about. The UVF and Red Hand Commando aren’t a single homogeneous structure. So to get 1440 people signed up to the programme is no mean feat. There were a lot of nods of agreement during Mitchell’s presentation from PUP members with UVF links. If the area action groups can funnel time and energy into community building activities, fostering new skills and confidence, ACT could have a very positive contribution to make to many working class loyalist areas.

During the Q&A, John Kyle asked whether ACT had considered incorporating a literacy strand into their programme. Literacy is traditionally low in loyalist working class communities, and given the stigma often attached, men might find it more comfortable to learn together. Hugh Smyth suggested that it was time that ACT was presented to First Minister Peter Robinson.

During coffee, some delegates explained that the HET enquiries (that are so focussed on loyalist crimes) and supergrass trials may put men back into prison. The need for family welfare (finance, transport, etc) will increase. The trials are unsettling and could lead to instability within some communities, with senior ‘leaders’ who are signed up to ACT being imprisoned and leaving less committed men behind. The next few months and years could be a worrying time.

It was then onto the main business of the conference. Only one nomination for leader was received and Billy Hutchinson (nominated by John Kyle and Philip Hamilton) was elected unopposed as the new PUP leader.

Hutchinson spoke from the podium, saying that he was grateful to be given the position, and confirmed his view that “there is life for the PUP”. He cast doubt on Sinn Fein’s credibility, saying that they were not interested in working class issues but were instead more interested in “power”, citing their support for PFI deals to build new schools (“leasing buildings off ourselves”). He spoke about the poverty that exists in Protestant and Catholic communities and said it was unacceptable. Hutchinson cautioned that “we’re on a hiding to nothing” if we argue for “five GCSEs”. Instead we felt that the party should talk about “learning”. He talked about needing a bill of rights addressed loyalism’s demonisation and his own demonisation (that he said had led to his arrest and subsequent release without charge in 2007).

In his closing remarks, Hutchinson talked about setting up a “think tank” to look at issues the PUP needed to tackle. He questioned why there were not more women in the party and at conference, and asked the women present to come back to him with ideas.

He also tied in the ACT presentation with the PUP’s future, asking “UVF men who are going to join the PUP to recognise that not everyone [already in the party] has our background” but pointed out that they bring plenty of experience of working with communities.

Hutchinson finished his impromptu speech and was given a standing ovation. As delegates tucked into a buffet lunch of sandwiches and cocktail sausages, I spoke to the new leader. You can watch the interview in yesterday’s post.

It was strange – though no surprise – to sit through a morning of speeches and presentations and not hear any reference to the victims of the actions carried out by the UVF organisation during the Troubles. Perversely, more is made of the unfairness that loyalism was not rewarded by the peace process unlike players in nearly every other post-conflict peace solution around the world.

Overall, at conference I sensed a party that was coming to grips with its limited size and finances, and that was keen to turn a corner and set a course for a more confident future in which they could continue to stand up for working class communities, be pro-union, draw attention to social injustice, and work with other parties to bring about sustained improvements. I heard a party that was clearly proud of its historical progressive leadership, and was keen to make further contributions.

One such area will undoubtedly be its potential ability to provide a space where former paramilitaries can come along to refine their political sense through the last phase of ACT. Of course, the reality is that the PUP isn’t the only party receiving UVF votes, and that the politicisation process of ex-combatants will feed into a number of parties.

Another challenge to the PUP will be the limitations that its current level of electoral success puts on its ability to advocate strongly for working class communities. They can point out injustices until they are blue in the face, but without backing from the DUP and Sinn Fein, their lobbying will be in vain.

Billy Hutchinson sounds like he is starting his leadership with energy. But he’ll be quickly reminded of the PUP’s minor position as a small fish in a big pond when he realises that (at the time I’m writing this post) twelve hours after being elected as leader, neither the BBC websites have mentioned his elevation. (Update – as Nevin points out, UTV ran it on their website from Saturday teatime.) It’ll be an uphill struggle to get noticed in a positive way.