Eamonn O’Neill is hoping the voters of South Down will return him to the Assembly where he served a term from 1998, only to subsequently miss out in 2003 by the narrowest of margins, just 36 votes. The Castlewellan-based SDLP representative didn’t stand in the 2007 election but has maintained a high profile locally, currently serving as Chairperson of Down District Council, where he has spent thirty-fours years as a councillor.

Over the years Sinn Féin’s vote in the constituency has increased at the expense of the SDLP, although the first-past-the-post electoral system at the May 2010 Westminster saw Margaret Ritchie returned with 48.5%, compared to Caitriona Ruane’s 28.7%. I caught up with O’Neill on the canvass in the Drumee estate in Castlewellan and asked him if he thought this result was an anomaly or signalled a halt in Sinn Fein’s rise (no prizes for guessing his answer):

I would contend that Margaret Ritchie’s election victory is the turn of the tide. I can see it. We meet it on the doorstep. People are telling us they are changing and we want to encourage them to be courageous and make that change.

As for the prediction (by Jim Wells) that the sixth and final seat could come down to a battle between O’Neill and the UUP’s John McCallister:

It is likely to be a tight situation. There are possibilities for us to regain our seat on two grounds, I believe. One is that one of our local Sinn Féin MLAs has simply been described – on the net – as “not performing” and that word is getting out amongst the people, so there is an opportunity for us there to regain a seat. And the second one is the unionist mandate may indeed be reduced as a result of the boundary changes, and that may very well create another opportunity. But … we are saying to our supporters, “come out and vote – this is an important election”. If we have the confidence of the voters, we will win.

Time, of course, will tell. 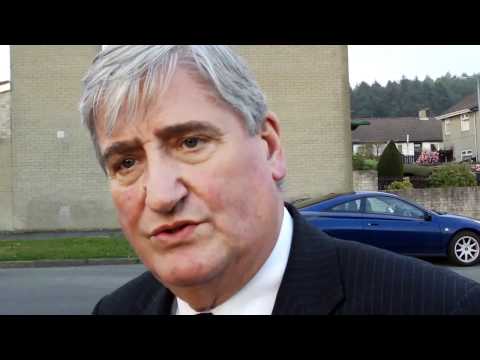