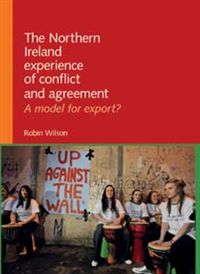 Which reminds me…. Platform for Change’s driving force Robin Wilson has produced a corrective to the notion that the lessons of the NI conflict are easily exportable. Like myself, Robin is associated with the Constitution Unit. He introduced his new book in a  CU blog which I here reproduce.

The water crisis in Northern Ireland before Christmas, which saw queues of citizens plaintively bringing plastic containers to standpipes, presented the region to the world’s media as akin to a third-world country. It brought home starkly how the restoration of devolution in May 2007 does not mean it is finally a ‘done deal’ which can now (conveniently) be neglected once more in London.

The trouble is partly that the governance arrangements, an impenetrable palimpsest of endless successive behind-closed-doors negotiations, are simply dysfunctional–no opposition in the assembly, no collective responsibility in government and a system of mutual vetoes which brings only inertia. And it is partly that power was consciously to be transferred (even in advance of elections to that effect) to two parties identified in a recent , authoritative text as within, and marginally outside, the family of the populist radical right—whose affiliates are elsewhere deemed governmental pariahs.

Yet, ironically, Northern Ireland has, at least until recently, been presented as a political model for export to other ethnic troublespots: Barack Obama appointed George Mitchell to his ill-fated middle-eastern mission in the belief that the former Stormont talks chair could work the same magic with Israelis and Palestinians. So why the region’s ‘peace process’ has not realised expectations—paramilitary violence too has been on the rise again—is of wider public interest. I’ve tried to offer an explanation in The Northern Ireland Experience of Conflict and Agreement: A Model for Export?, based on archive research in London and Dublin on the early 1970s power-sharing experiment, interviews with senior officials associated with the Belfast agreement of 1998 and a comparative look at power-sharing in Macedonia and Bosnia.

And I try to chart a political route out of the morass in which Northern Ireland remains—fundamentally from a society where it is assumed superficially that ‘ancient hatreds’ remain in play and that therefore communalism is the only realistic politics to an evidence-based alternative recognising that the (diverse) individual citizen is the only unit of a democratic society.