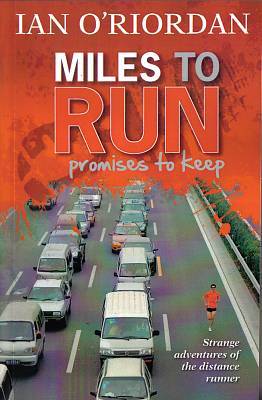 Ireland is in the middle of a boom – a running boom.

Chances are, even if you have never run a step yourself (apart from some painful P.E. classes many moons ago), someone you know has taken up running over the last little while. Road races in Northern Ireland and in the Republic have seen record-breaking numbers of participants this year, as they did the year before and the year before that. A new book by the athletics correspondent for the Irish Times, Ian O’Riordan, Miles to Run, Promises to Keep (Boglark Press, 2010) captures some of that zeitgeist.

For those of you who think distance running is mad, it may come as a surprise to you that O’Riordan agrees. Three of the 20 chapter titles in the book actually contain the word ‘mad’ or ‘madness.’

Indeed, O’Riordan positively glories in the madness of it all – chronicling the extreme training regimes of Olympic champions; the sagas of common-variety club runners who mail order Siberian ginseng, hoping to gain an edge; and the boundless enthusiasm of the ‘fun runners’ who are driving Ireland’s running boom.

First, a confession. I am an avid runner myself and devotee of O’Riordan’s weekly athletics column, my favourite feature of the Saturday Irish Times. I acquired the book thinking that it would be a compilation of his columns over the past decade – so I suppose it says something about me (as much as about the quality of O’Riordan’s writing) that I bought a book thinking I would have previously read most of it anyway.

I was pleasantly surprised. The book covers some of the same ground as his columns, but they have been expanded and woven seamlessly together into substantial chapters featuring a range of personalities and topics.

So, the book relives some of Irish athletics’ most memorable moments: Sonia O’Sullivan and her mixed fortunes over four Olympic Games, John Treacy winning the 1979 World Cross Country in Limerick, Ronnie Delany’s run for Olympic gold in the 1500 in 1956, Eamonn Coghlan’s quest to break the 4.00 minute mile at age 40, and so on. There are insights into the careers of international stars like Roger Bannister, Paula Radcliffe, Haile Gebrselassie and Paul Tergat.

I was especially fascinated by O’Riordan’s account of the training regime of the Czech champion Emil Zatopek, whose training included becoming a human washing machine by running for up to two hours over a pile of dirty clothes in his water-filled bathtub. He also subjected himself to punishing slogs through snow-laden forests, wearing army boots. It made my attempt today to run up Black Mountain in the snow seem positively pedestrian.

The Irish Times review of the book by Catherina McKiernan, Ireland’s four-time silver medallist in the World Cross Country, identifies even more stories and highlights.

O’Riordan also discusses the promising career of Portaferry’s up-and-coming young talent, Ciara Mageean, who won a silver medal in the 1500 at last summer’s World Junior Championships. Of all the distance running medals on offer at that event, Mageean’s was the only one taken home by a non-African. She has already been labelled the ‘next Sonia’ – a challenging burden, O’Riordan admits, because those are some pretty big shoes to fill.

At the same time, O’Riordan considers the seeming invincibility of the Ethiopians and Kenyans on the international scene and the decline in elite distance running standards in Europe and North America. It’s not just that the Africans have gotten faster, the Europeans and North American elites have, on average and with few exceptions, gotten slower.

But O’Riordan also moves beyond the stars of the sport, telling the stories of the masses who run for charity. He highlights the extreme task taken up by former Sawdoctors drummer Johnny Donnelly, who is in the middle of a quest to run a marathon every month over a period of four years.

O’Riordan is a runner himself, and his descriptions of what it is like to run alone on a frosty morning in the Dublin Mountains; or participate in events such as the New York, Athens, Honolulu, and Dublin Marathons, are as illuminating as any of the stories of the stars. In these sections of the book, O’Riordan chronicles running’s intoxicating mix of pleasure and pain, and in doing so helps to explain why so many people are getting hooked.