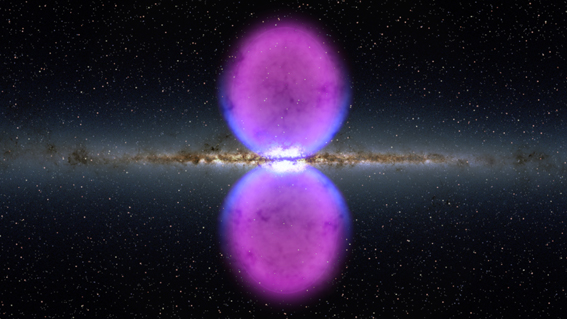 From the Nasa press release

NASA’s Fermi Gamma-ray Space Telescope has unveiled a previously unseen structure centered in the Milky Way. The feature spans 50,000 light-years and may be the remnant of an eruption from a supersized black hole at the center of our galaxy.

“What we see are two gamma-ray-emitting bubbles that extend 25,000 light-years north and south of the galactic center,” said Doug Finkbeiner, an astronomer at the Harvard-Smithsonian Center for Astrophysics in Cambridge, Mass., who first recognized the feature. “We don’t fully understand their nature or origin.”

And another, labelled, image.

From end to end, the newly discovered gamma-ray bubbles extend 50,000 light-years, or roughly half of the Milky Way’s diameter, as shown in this illustration. Hints of the bubbles’ edges were first observed in X-rays (blue) by ROSAT, a Germany-led mission operating in the 1990s. The gamma rays mapped by Fermi (magenta) extend much farther from the galaxy’s plane. Credit: NASA’s Goddard Space Flight Center.