Confidence in the results of election polls is fundamental to encouraging public participation and preventing the kind of legal challenges that led to the “hanging chad” fracas around the 2000 US Presidential count in Florida and NI’s own Fermanagh & South Tyrone court cases.

Over the weekend, Slate published an interesting article that describes the continued use of electronic voting systems in the upcoming US mid-term polls and the “faith-based results” that will be relied on.

Whoever the machines report as the “winner” will become the winner, even though no human being will be able to prove that any of those candidates received more votes than the “loser.”

There have always been worries about the security and accuracy of electronic voting systems … seemingly digital (microchip) voting solutions are more suspect and prone to concern than digital (“stupid old pencil”) voting solutions.

A few weeks ago, a couple of computer scientists hacked Sequoia’s AVC Edge, replacing the voting software with a Pac-Man video game—without even breaking the machine’s co-called “tamper evident” seals.

Seals aren’t much good if the screws are exposed!

The Pac-Man hack … was accomplished without breaking any of the “tamper-evident” seals that voting machine companies and election officials claim are used to ensure nobody can physically hack into them without being discovered.

“We received the machine with the original tamper-evident seals intact,” the hackers from Princeton and University of Michigan report. “The software can be replaced without breaking any of these seals, simply by removing screws and opening the case.” 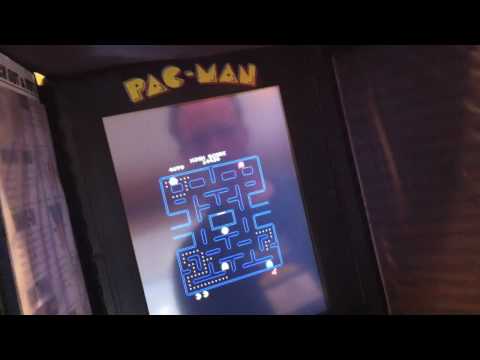 Ireland trialled the use of electronic voting machines in three constituencies during the 2002 General Election and referendum on the Treaty of Nice. Having subsequently purchased 7000 e-vote machines from Nedap , software changes were required to address “the absence of an audit mechanism or verified paper trail”. Back on 27 October 2006, the Taoiseach Bertie Ahern explained to the Dáil:

We have to correct the software, which will cost €500,000 and try to move forward. Otherwise, this country will move into the 21st century being a laughing stock with our stupid old pencils.

By April 2009, any plan to roll out electronic voting was scrapped, and in early October 2010, the €54.6 million scheme was fully abandoned with the announcement to dispose of the machines (which have been stored across the country at a cost of €3 million over the previous five years).

No doubt, locally, EONI will stick to stupid old pencils for many years to come!