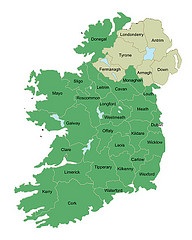 Although discussion on unity within unionism, or more broadly unionist realignment has been ongoing for some time, there has been little word of the same within nationalism.  Until, that is, Declan O’Loan made his surprise intervention a few weeks back.

Perhaps the North Antrim MLA realized in the wake of the Westminster vote there was only one nationalist quota left for two sitting nationalist MLAs. In which case he would have to eat even further into Sinn Féin’s transfer vote in order to retain his seat.

In fact the debate itself, at least on Slugger, felt more like a weak shadow play of the more vigorous debate within unionist political circles.

Certainly there are shared aspects of the predicament that has befallen both the former incumbents of Ulster politics: the SDLP and the Ulster Unionists. The declining trend in their respective votes over the last ten years almost exactly mirror each other.

This suggests, despite the finger pointing at individual leaders neither were ever in control of the wider trends which have unremittingly forced both parties to the fringes of Northern Irish politics in the post Agreement era.

Both once shared a sense of entitlement to primacy within the system, although in the SDLP’s case that particular knock came earlier on when Sinn Féin’s Pat Doherty breasted to a comfortable victory over Agriculture Minister, Bríd Rogers back in 2001.

In the meantime the SDLP has failed to define new more viable battlegrounds for itself.  And not just in delineating meaningful difference with their closest rivals Sinn Féin, but to present a civil challenge over the constitutional question in ways that attract rather than repel support from the unionist quarter.

That failure to develop new intellectual capital may be another reason why an otherwise cautious, moderate and loyal member of the SDLP went so far off message.

Indeed the idea of a unified nationalist party has found favour with highly respected Nationalist commentators, like Fionnuala O’Connor, as a potentially desirable outcome.

And yet it is not entirely clear why. For one, it is not an outcome Sinn Féin either needs or desires. They are comfortable as the senior party within Northern Irish nationalism. A merger might bring them sufficient votes in the Assembly to take the First Minister’s job next Spring, but it could also trigger a counter move on the part of the unionist parties.

It also ignores the longer term, iterative effects of Proportional Representation on the body politic. PR naturally fragments larger interest groups into smaller ones. Single block parties of the kind we see in Britain and the US are the singular product of the ‘First Past The Post’ system.

In truth none of our political parties have been able to confront the reality of post conflict politics. For unionists the job is to turn from defending to promoting the union: a union, that for all the fears expressed up to and after the Belfast Agreement, remains largely intact.

For northern Irish nationalism the problem is tougher since it remains within the UK and a long way short of uniting the island in – as the Church of Ireland Protestant Wolfe Tone once put it – “the common name of Irishman”.

Talk of unifying the two main parties is poor compensation in the absence of a credible plan to bring that larger nationalist goal to fruition. Worse, it may only be ‘externalising’ its frustrations at the glacial rate of progress towards that ambitious goal.

It’s not helped by the fact that most nationalist leaders refuse to admit the problem thrown up by the population figures in the 2001 Census: in order to get what it wants, nationalism must make its case to a significant slice of the unionist population.

That’s a prospect relished by precious few within either of the main parties. After nearly forty years of a nasty, ill-tempered and deeply sectarian faction fight, it defies the commonest logic to make friends with people with whom cultural differences have been magnified through the prism of that same conflict.

For all its electoral success in the last ten years that is not a task Sinn Fein can achieve under its aegis alone: not least because of its close and abiding relationship with that conflicted past.

Ironically, nationalism’s best chance for unification may be to remain free to develop separate and competing visions for unification. And maybe, just maybe, to begin to ask the people of the south if they even want to play that ‘game’ anymore.