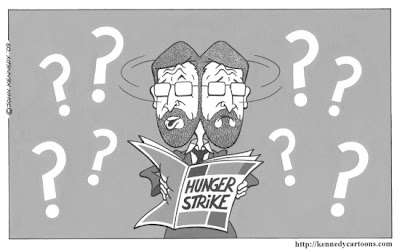 This week in South Derry, bowing to pressure from recent revelations that have reduced aspects of the standard Provisional narrative of the 1981 hunger strike to self-serving propaganda, Gerry Adams and members of the 1981 PIRA sub-committee for the Hunger Strike will meet privately with members of hunger strikers’ families. This comes as a former hunger striker and other Blanketmen, and the families of hunger strikers Patsy O’Hara and Mickey Devine, have made public calls for a full inquiry into the events of July, 1981. It has been established an offer, approved by Thatcher, which met 4 of the 5 demands, was conveyed through the Mountain Climber link via Brendan Duddy, to Martin McGuinness in Derry, who in turn brought it to Gerry Adams, Jim Gibney, Tom Hartley and Danny Morrison in Belfast. Danny Morrison gave details of the offer to prison OC Bik McFarlane, who then discussed it with PRO for the Hunger Strikers, Richard O’Rawe. They both agreed there was enough there in the offer to end the hunger strike; Bik McFarlane said he would send word out of the acceptance. This conversation was overhead by a number of nearby prisoners who have come forward corroborating it. Brendan Duddy has confirmed that the response he got from the Adams committee was rejection: “More was needed.” Six hunger strikers subsequently died. The British had the prison authorities implement the substance of the July offer three days after the hunger strike finally ended in October, 1981.

The question remains, why did the Adams committee over-rule the prisoners’ acceptance of the offer? The answer to this will need to be supported and not undermined by known facts and evidence. This has been the demonstrable problem with the narrative constructed by Danny Morrison, and the shifting denials that have come since the publication of Richard O’Rawe’s book, Blanketmen in 2005. The denials and half-baked explanations have been continually eroded and fatally undermined by facts and evidence. Brian Rowan’s recent interview with Bik McFarlane is a masterstudy in this. It was ridiculous. The problem for those who support denying the truth is that more evidence continues to emerge as more time goes by, and they cannot know what will come next. So the lie of yesterday gets changed by the evidence which arrives tomorrow; this is something that only by telling the truth today they can prepare for. If they continue to lie, they continue to expose themselves further. This self-serving cover-up only protects those who have something to hide. The courage and integrity of the protesting prisoners, the hunger strikers and their sacrifice is not under question, nor will be sullied by the betrayal of the Adams committee.

“We, the O Hara and Devine families, would also wish to put on public record our full support for an independent Republican Inquiry, which was first called for by ex-Hunger Striker Gerard Hodgins, into the controversial claims surrounding the events of the 1981 Hunger Strike.

At a recent meeting in the Gasyard, Derry City, which we attended, compelling and disturbing evidence revealing that an offer made by the British which conceded four of the five demands, was accepted by the prison IRA leadership and rejected by elements of the outside IRA leadership.

These claims which have been supported by former blanket men and ex-hunger strikers have led us to conclude that only an independent Republican Inquiry, free from party political affiliations, can heal the wounds of our families that this controversy has re-opened. We are only interested in the facts, the evidence and the truth and we would hope that all republicans would support us in our call and bring and end to this controversy so that we, the families, have peace of mind as to what really happened during this period.”

Former Hunger Striker and Blanketman Gerard Hodgins and Blanketman Thomas “Dixie” Elliott have made public calls for a full inquiry into the questions hanging over the 1981 hunger strike.

Recent revelations have pointed to the need for clarity, full disclosure and honesty on the part of all who were involved in those secret negotiations/discussions. I would appeal for all these people, for the sake of our memories and in the service of truth, to agree to co-operate with an inquiry into all aspects associated with this traumatic time in our history which has been thrown into such question with the reports and evidence that a deal could have been secured before Joe McDonnell died.

A genie has been let out of the bottle and thrown the perceived narrative of the horrors of 1981 into question. One thing is certain of those days and which no question mark hangs over: the Blanket Men fought courageously and the hunger strikers died martyrs and their commitment and sacrifice can never be sullied, questioned or diminished in any way.

The final piece of the jigsaw which has remained hidden from view to this day is the actions and reasons for those actions on behalf of the leadership who guided us. It is time for answers and explanations to be offered.

I am not a member or supporter of any political party, grouping or organisation. I am a supporter of peace and politics and don’t advocate any sort of return to the days of war: I am not on a Sinn Fein bashing exercise and have tried to be measured with my words. I am an ex-Blanket Man who was there and would welcome some insight into the secrets of 28 years ago.

The whole argument has now gone from the Prison Leadership accepting what was on offer on July 5th to its rejection from outside and just why was it rejected. The families are entitled to these answers as are the friends and comrades of the men who died. What we don’t need is the usual attempt to smear those who ask these questions […] Those asking these questions are former Blanket Men with no agenda only the truth. I myself am not a member of any group nor party and I am now firmly opposed to the use of Armed Struggle as I saw too many give their lives for what was effectively on the table in 1973. We need closure in this and I feel that both sides need to come together in a debate open to all so that answers can be obtained.

The IRSP, along with the families of two hunger strikers, the O’Haras and the Devines, have also called for an inquiry:

The IRSP wish to put on public record our support for an open independent republican inquiry into the truth behind the 1981 hunger strike as called for by the O Hara and Devine families and also by former IRA hunger striker Gerard Hodgkins.

Given the contradictory statements emanating from various spokespeople from Sinn Fein on this matter and the refusal of these people to partake in the recent discussion held in the Gasyard center in Derry we are firmly of the opinion that such an inquiry is the only course of action open to the republican community. We have come to this conclusion because of the weight of evidence from wide ranging sources who were directly involved which clearly contradicts the Sinn Fein version of events and which furthermore suggests that the lives of the last six hungerstrikers may have been saved.

The forthcoming Sinn Fein closed meeting with the families of the ten hunger strikers is purely another attempt to mislead and confuse events surrounding the 1981 hunger strike.

Adams’ meeting with the families is to take place at Gulladuff in south Derry on Wednesday.

Clearly, a private meeting in the back of beyond will not suffice. The 1981 hunger strike left a massive imprint on the public consciousness, and has been an emotive issue used by Sinn Fein ever since. Bobby Sands’ face famously graces the side of the political party’s Belfast headquarters; it could be said that the images, symbolism and emotion of the hunger strike have been incorporated – literally – into the Sinn Fein brand. The public have the right to the truth – told publicly.

“This is a huge opportunity and I feel there’s a potential here to end this” Bik McFarlane miraculously recovers his memory and completely backtracks on every denial he had made previously, while also making up new, contradictory details never before mentioned

“I will not be attending and will not send a representative” Gerry Adams refuses to attend public meeting about the hunger strikes; extremely revealing discussion in the comments section

The Truth is a Heartbreaking Thing Initial summary of Derry meeting

Upcoming Debate: “What is the Truth Behind the Hunger Strike?” Announcement of public meeting and note of Radio Foyle debate between Raymond McCartney and Richard O’Rawe (also discussed on The Pensive Quill: A Shifting Narrative)

Did Thatcher Kill All 10 or Only 4? – contains statements and interview excerpts

Previously on Slugger:
O’Rawe’s account confirmed: Hunger Strikers Allowed To Die (28 March 08)
Eamon McCann verifies Richard O’Rawe’s account of the 1981 hunger strike in which he alleges that six of the hunger strikers need not have died as the prisoners had agreed to accept an offer from the Mountainclimber, only to be over-ruled by Gerry Adams.

Hunger Strike Controversy Has Not Gone Away, You Know (17 April 08)
Many background links