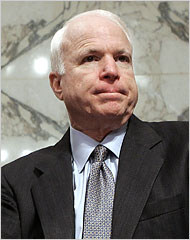 Have you ever wondered how Senator John McCain acquired all that steel in his character? No, it wasn’t due to those Vietnamese torturers. it was in his blood, stupid – OUR blood, planters! (Actually, I’m of mixed heritage and insufferably enjoy the best of both universes). But enough of me and back to the (US) Republican standard bearer. The Ulster – or as they call it there – the Scots Irish ancestry of McCain is amazingly offered as a part explanation of his character in the current edition of the intellectual magazine Prospect. In a piece entitled “Fighting John McCain” the normally cosmopolitan writer Anatol Lieven dares to attribute McCain’s belligerence to his Scots -Irish roots!

Here are a couple of delicious quotes:

In the words of a biographer of McCain’s personal hero, Scots-Irish president Andrew Jackson: “It appears to be more difficult for a North-of-Irelander… to allow an honest difference of opinion in an opponent, so that he is apt to regard the terms opponent and enemy as synonymous.” Similar things have often been said about McCain.

Of course, it would be wrong to see the Scots-Irish of today as forming some tight community with uniform cultural traits. As their culture has spread to influence much of white culture in the US heartland, so it has weakened. Though both McCain and Webb stress their faith, neither espouses the fundamentalist religion at the core of the Scots-Irish tradition.

Nonetheless, there is enough of the Scots-Irishman in McCain to make me nervous about how he would behave as president.

Would Lieven create a similar stereotype for an African -American – even a part-African American? Like Barack Obama?

Maybe that’s being too sensitive. At least John Laird will welcome the recognition.

How firmly based is this ancestry? The usual mixture of the vague and the specific I fear, according to Ulster Heritage Magazine.
Extract:
“The short answer is his people are indeed from Ulster, from County Antrim, Ireland. They left from Coleraine town circa 1719 and appear on the border of the Pennsylvania and Maryland Colony in the early 1720s. His immigrant ancestor was named Alexander McKean and yes, the two lads who run the Ulster Heritage DNA Project are from the same McCain family.”

Maybe we’ll see McCain running a US style Town Hall meeting in the Diamond in a year or two.. Wouldn’t it be great to welcome home another Son of Ulster marching towards….???