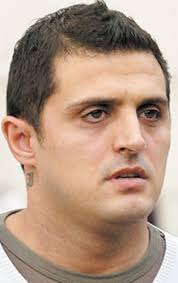 THIS is very unusual. After six men arrested in combat uniforms during a planned UDA ‘show of strength’ were freed on a technicality (apparently they were not in a public place, even if the private place was licensed as a public bar), Mr Justice Coghlin has now adjourned the sentencing of UDA leader Ihab ‘Bailed Again’ Shoukri to take a week to reflect on “recent political progression”. Yes folks, that was political “progression” and not political “interference”, which is what this amounts to. Justice Coghlin has certainly changed his tune since 2004, when he used to question obvious political interference in a previous Shoukri case. Such “progress” by the UDA worth reflecting on is the fact that this terrorist group is still armed to the hilt and won’t be decommissioning – although if Shoukri has done as much as could be expected by the Government to emasculate a hardline element in the UDA, he can probably expect to walk free or face a seriously reduced sentence next week. Whether he then gets on a plane with a new identity or not is anyone’s guess.