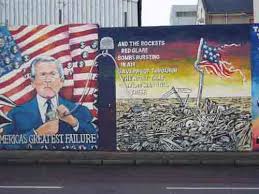 MARTIN McGuinness may have welcomed George Bush’s impending visit to Northern Ireland, but at least one member of the Sinn Fein youth wing feels differently. Writing on Ógra Shinn Féin’s website, the member states that ‘some [decisions] have to be denounced for the good of the party’, before going on to describe Bush as a war criminal etc. Coincidentally, it was only days ago that Bush strongly criticised those prepared to negotiate with what the US considers terrorists. It leaves us with the slightly strange situation of what many in SF would describe as a current US republican ‘war criminal’ shaking hands with what the US considers a former Irish republican ‘terrorist’ that the Americans once successfully ‘appeased’. The only surprise is that the Northern Irish peace process hasn’t been trotted out again by the Democrats to deflect Bush’s intervention.